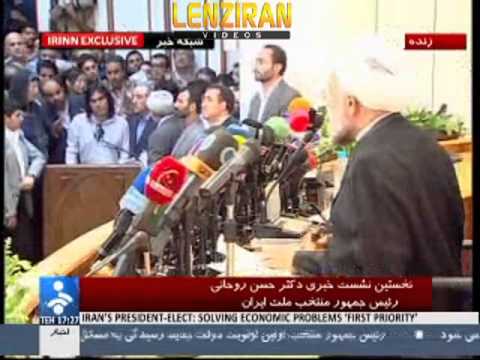 In his first press conference after winning the Presidency, Hassan Rouhani navigated carefully amid questions on the economy, politics, foreign policy, and the fate of detained opposition leader Mir Hossein Mousavi.

Rouhani, who claimed a surprising first-round majority in Friday’s ballot, immediately set out the economy as the priority issue. His emphasis was not new policy, however, but on management to increase production and investment and to ease inflation by reducing liquidity in the market. In his most telling phrase, commenting on the fate of those in the Ahmadinejad Government, he said, “I will retain those who are good managers, but those who have not bought a ticket cannot ride the bus.”

On foreign policy, Rouhani showed openness to talks with the US, but he said out conditions to be met: 1) Washington’s promise not to interfere in Iran’s internal affairs; 2) recognition of Tehran’s nuclear rights; and 3) and an end to the “unilateral and bullying policies” of sanctions.

The surprise of the conference came with the introduction of the name of Mir Hossein Mousavi, the candidate in the disputed 2009 Presidential election who has been held under strict house arrest — with wife, activist Zahra Rahnavard, and fellow 2009 candidate Mehdi Karroubi — since February 2011.

An audience member shouted, “Mousavi must be here!”, and a reporter from the reformist newspaper Etemaad asked when the former Prime Minister will be released.

Rouhani’s careful reply? “Some issues need to be resolved but that I am sure this will happen in time.”

Iranians, celebrating World Cup football qualification after a 1-0 win over South Korea, break into political chants — from the 4:28 mark, they shout, “Ya Hossein! Mir Hossein!”, for the detained opposition leader Mir Hossein Mousavi:

Larijani Backs Away From Court Summons of Ahmadinejad?

According to Fars News, Speaker of Parliament Ali Larijani has backed away from reports that he was behind the summoning of President Ahmadinejad to court:

Some media presented this situation as if it were a complaint by the parliamentary speaker. We don’t have personal complaints. It’s possible that the Article 90 committee observed a violation and referred it to the judiciary.

On Monday, Iranian media reported that Ahmadinejad had been summoned to criminal court to answer unspecified allegations. The President’s website said he has until 26 November to respond, long after he leaves office in early August.

A Signal from Rouhani for Engagement with US?

A signal in the picture? Hassan Rouhani’s campaign posts a photograph:

Flash from the past: #Rouhani visits #US field hospital set up to treat survivors of 2003 earthquake in Bam pic.twitter.com/rgKNDN9r1V

President Ahmadinejad has visited the Center for Strategic Research to meet his successor, Hassan Rouhani.

Ahmadinejad congratulated Rouhani and promise his Government’s full co-operation for the transition of administration.

Following the council elections held on Friday in which nearly 3 million votes were cast, the 31 members of the Tehran City Council have been announced and are made up of 19 principlists and 12 reformists who will hold office for a four-year term. The daily reformist newspaper, Aftab-e Yazd, reported earlier that 13 reformists were elected to the council.

Aftab-e Yazd, the daily reformist newspaper, affiliated with the Association of Combatant Clerics, published a photo on its front page today of the 13 reformists elected to the Tehran city council. 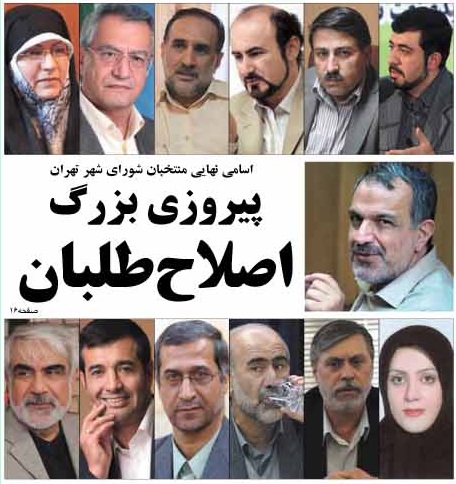 Russian Foreign Minister Sergei Lavrov has re-confirmed Tehran’s position that it is willing to suspend enrichment of 20% uranium, given recognition of its right to enrich and suspension of sanctions.

Lavrov said, “For the first time in many years, there are encouraging signs in the process of settlement of the situation with the Iranian nuclear programme.”

Mohammad-Ali Khatibi, Iran’s OPEC governor, has rejected suggestions that Iran is selling oil at greatly reduced prices to India. Khatibi stated that Iran sells oil based on official selling prices throughout Asia, Europe and Africa, and that such stories were designed to damage Iran’s oil exports and force her to sell crude at low prices.

On Friday, India’s Oil Minister, M. Veerappa Moily, said that “Our refiners enjoy much better margins. The cost is $2 less [per barrel than global prices]… that’s why we are seriously engaging with Iran.” In 2012-13, Iranian oil supplies accounted for 7.2% of India’s oil imports, down from 10.5% the previous year.

Iran is to step up its reconstruction efforts in Syria, signing agreements on Monday to rebuild electricity stations destroyed in the 27-month conflict, according to Syrian State media.

Ahead of Ramadan, Tehran has also pledged to send food, medicine, medical equipment and oil products to the Syrian government.

The Iranian Foreign Minister’s Special Advisor for Economic Affairs, Hassan Kazemi-Qomi — formerly Tehran’s Ambassador to Iraq — said that in addition to agreements over health, oil, electricit,y and foodstuffs, Tehran will provide the Assad regime with a $3.5 billion credit line.

The announcement comes after Syrian Prime Minister Wael al-Halqi said Sunday that Damascus had exempted Iranian products from customs duty, to facilitate the flow of Iranian goods into Syria.

Iran has said that it plans to carry out a range of development projects in Syria, including the building of flour mills as well as the construction and reconstruction of electricity power plants.

Tehran’s reconstruction projects — facilitated in part by the Revolutionary Guards — seek to bolster the Assad regime at a critical time as temperatures rise this summer, electricity outages become more and more common, and food shortages grow.