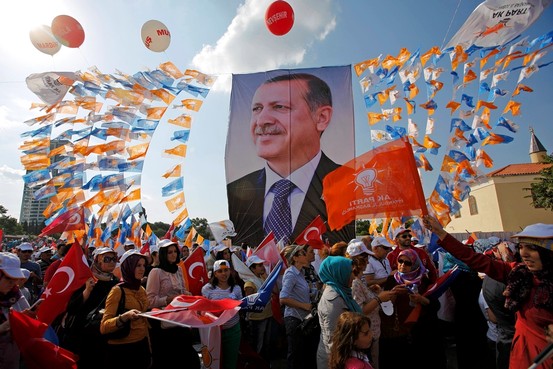 Supporters of Prime Minister Erdogan rally on Sunday in Istanbul

Deputy Prime Minister Bulent Arinc has said on State TV that the Government could use the army to end nearly three weeks of protests in Istanbul and other cities.

Arinc said “the innocent demonstrations that began 20 days ago” had “completely ended”, so any further demonstrations would be “immediately suppressed”:

Riot police backed by water cannon have warned around 1000 trade union workers to stop blocking a major avenue in the centre of the capital Ankara.

As part of a one-day national strike called by five major trade unions, the workers were trying to march towards the central Kizilay district, waving flags and chanting slogans.

“Those of you on the streets must stop blocking the streets. Do not be provoked. The police will use force,” officers shouted through megaphones as several water cannon were positioned a few hundred metres away.

After 17 days of nationwide protests, it was Prime Minister Erdogan’s turn to show off a mass rally on Sunday, as he spoke to a crowd in Istanbul, not far from the focal points of Taksim Square and Gezi Park.

Erdogan, putting away reports of a tentative deal on Thursday night over the status of Gezi Park, put out defiance and ridicule:

I warn once again. They are making calls to unite at Taksim. I call for commonsense. My people: do not fall into this trap….

If the international media want a picture of Turkey, the picture is here. CNN, Reuters, BBC, hide this picture too, and go on with your lies.

Meanwhile, the security forces maintained their weekend crackdown, preventing people from returning to Taksim Square and Gezi Park — the catalyst for protests as the Government pursued plans to turn the green space into a replica military barracks with a shopping mall.

The Turkish Bar Association called on the Council of Europe to request an explanation from Ankara the role of the police amid protests, criticising “statements made by the Turkish government that raise tensions and escalate violence and the bad treatment of people by the authorities and the security forces”.