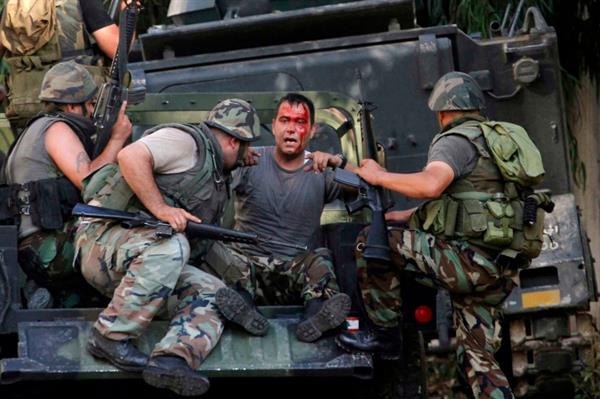 LATEST: Qatar — Emir Hands Over Power to His Son

After 57 people were killed in two days of fighting between the military and the supporters of Sunni cleric Ahamad al-Assir near Sidon, the Lebanese Army has declared it will preserve Lebanon’s stability, putting down any further uprising.

The army, assisted by fighters from Hezbollah, took over Bilal bin Rabah Mosque and al-Assir’s complex in the suburb of Abra on Monday, a day after fighting began at a military checkpoint. Seventeen troops and at least 40 supporters of al-Assir were slain. Almost 100 Army personnel, 60 Assir supporters, and more than 50 civilians were wounded.

Arrest warrants were issued for the anti-Hezbollah cleric and 123 of his followers.

General Jean Kahwagi declared, in a message to troops, “You have accomplished a difficult and delicate mission and you have triumphed with your heads held high because you saved your country from strife.”

A series of leading politicians supported the military.

“We will stand by the Lebanese Army and we believe in the [Lebanese] state,” former Prime Minister Saad Hariri said. “The root of the problem in Lebanon is that non-state arms are widely spread, which leads to confrontations in the country.”

Hezbollah released a statement declaring, “Hezbollah, along with the Lebanese [people] expresses its pain, grief, and anger at what happened to the Army and our families in beloved Sidon, and strongly denounces this awful crime and confirms its complete support to the military institution.”

The organization urged authorities to take the necessary steps to end the clashes and prevent their revival.

Following a meeting in Beirut with ambassadors of the five permanent members of the United Nations Security Council, UN Special Coordinator for Lebanon Derek Plumbly said, “I and the ambassadors were unanimous in deploring the recent challenge to the rule of law in Sidon, and attacks on the Army and to the families of those who have been killed in the fighting.”

Arab League Chief Nabil El Araby asserted, “Supporting the Army will help [the country] perform its national duties seeing as it is the symbol of Lebanon’s unity, security and stability,” he said.

Six soldiers have been killed by unidentified gunmen at an army checkpoint south of the coastal city of Sirte, formerly a stronghold of Muammar Gadaffi.

The European Union has agreed to resume in October postponed talks with Turkey about its entry to the EU. Germany tabled a proposal that would delay the talks by four months to demonstrate the EU’s concern about the government’s crackdown on anti-government protests.

Bahçeli told his party’s parliamentary group meeting, “The widespread communication technologies have been shaping the cultural structure and the way to do politics. But Erdoğan has no piece of it. We face a person who puts his interest before everybody.”

He also attacked the Prime Minister for not listening to other points of view:

He rebuked the teachers. He scolded the students. He tried to become a Twitter police. This is the final stage of hubris. It’s been revealed that our country being an example is a lie. The party that does not accept democracy has nothing more to offer.

The conflict of believers and non-believers has been supported. He came down on people on the issues of headscarf wearing women and others, those who have three children or don’t, those who drink or don’t. The provocation campaigns are still in progress.

Bahçeli urged Erdogan to leave office, stating “The prime minister has managed to become a political disaster. He should open the way for democracy before it is too late. Turkey is not dependent on Erdoğan, if he cannot do it, he should go.”

After meeting on Monday with a delegation from the pro-Kurdish Peace and Democracy Party (BDP), jailed Kurdish militant leader Abdullah Ocalan said the peace process to end three decades of conflict had “moved into the second stage” following his fighters’ withdrawal from Turkey.

Ocalan stated, “I hope the state assesses our proposals on the second stage correctly and reaches the right conclusions.” He added, “despite obstructions by some powers I am determined to advance this process and I believe that we will be successful.”

Rouhani criticised international interference in Turkey’s domestic situation and agreed that “There is no doubt that expansion of ties and cooperation between the two countries can significantly help the resolution of regional issues and restoration of peace and stability in the region.”

In a speech at the Justice and Development Party’s (AKP) parliamentary meeting, Prime Minister Recep Tayyip Erdogan maintained his defiance in the face of continuing discontent and warned anti-government activists not to intervene in government decisions.

Referring to calls for the removal of the Istanbul governor, Erdogan said “Everyone should know their place, no one can talk to the AKP in this way.” He criticised the Gezi Park protests for seeking international approval through the media, adding “No minority can occupy Gezi Park, which belongs to the public. They knew they could not deceive the people.”

The Prime Minister compared those protests with demonstrations in support of his government: “Those who gathered in the streets at our rallies did not loot, did not destroy. They voiced their claims in the squares in a democratic way instead of using violence. Violence never heralds victory, it marginalizes. Those who resort to violence are bound to lose.”
Erdogan also echoed Ankara Mayor Melih Gökçek’s criticism of BBC reporter Selin Girit, which prompted the BBC to express concern about intimidation of its journalists.

A police officer who allegedly shot a protestor in the head in the early days of the Gezi Park protests was released yesterday, with the prosecutor ruling that the shooting was “within the limits of self-defense.”

Twenty-six year-old Ethem Sarısülük was shot on 1 June, but died thirteen days later after being kept on life support. The police officer who allegedly shot and killed Sarısülük, identified as Ahmet Ş., was released pending trial by the Ankara 13th Criminal Court on the condition of judicial control.

Hundreds of demonstrators gathered in Istanbul yesterday evening to protest the court’s ruling and condemn the police violence that has been a central feature of the government’s response to the protests.

Professor Baskın Oran and columnist Murat Belge have dealt a blow to the government by announcing that they will not participate in the final meeting of the Wise Persons’ Committee, which had been formed by the Turkish government to assist in the country’s bid to find a peaceful solution to the Kurdish issue. Their decision to withdraw from the meeting was made in response to Prime Minister Erdogan’s mishandling of the Gezi Park protests that have rocked the country.

Oran said “Kurds began showing their displeasure with the situation already. Because of the disgrace the prime minister created with Gezi, Turkish nationalism has reached its limits and now he is surfing on it; there is no step to make Turkey decentralized to stop the bloodshed in the country.”

Belge announced his “resignation” in his column today in daily Taraf. He criticised Erdogan’s harsh language, saying “Like all those Gezi things did not happen, like all those insults were not said [by the prime minister] I found it meaningless and also impossible to speak about peace.”

Twenty people have been detained following raids in the capital Ankara by anti-terrorism police. According to authorities, those targeted are suspected of being members of an unspecified terrorist organisation who had attacked police officers, businesses and public property during the recent widespread protests.

Last week, Turkey’s European Union minister, Egemen Bağış, declared that all those who continue to protest will be considered by the state either a “supporter or member of a terror organization.”

Qatar: Emir Hands Over Power to His Son

In a seven-minute speech, the Emir oF Kuwait, Sheikh Hamad bin Khalifa Al Thani, has transferred the power to his second son.

The Emir announced, “I declare that I will hand over the reins of power to Sheikh Tamim bin Hamad Al Thani, and I am fully certain that he is up to the responsibility, deserving the confidence, capable of shouldering the responsibility and fulfilling the mission.”

The Emir has ruled since 1995. Sheikh Tamim has been groomed for succession since 2003, when his elder brother stepped aside.

The Emir told the Qatari people,

I am confidant that you are fully aware of your loyalty and of your Arab and Muslim identity. I urge you to preserve our civilised traditional and cultural values, originating from our religion, Arab identity and above all our humanity; as we believe that the Arab World is one human body; one coherent structure; it prospers if all its parts are prosperous.

Brian Whitaker posts a full English translation of the speech.