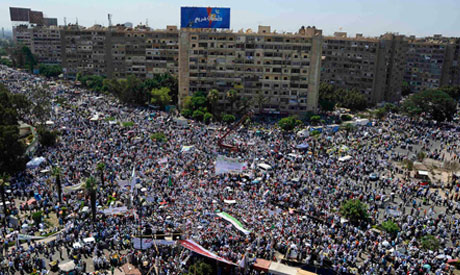 Trying to fend off Sunday’s mass protests, Egyptian President Mohammed Morsi warned in a Wednesday night speech, said that the polarised state of the country’s politics was threatening democracy and could plunge the nation “Political polarization and conflict has reached a stage that threatens our nascent democratic experience and threatens to put the whole nation in a state of paralysis and chaos.”

Morsi continued, “The enemies of Egypt have not spared effort in trying to sabotage the democratic experience.”

Among those enemies were allies and officials of former President Hosni Mubarak, overthrown in February 2011, aided by a media tarnishing the image of the Presidency and Government and inciting violence.

Morsi said the Ministry of Interior would form a unit to combat “thuggery” and terrorism, including the blocking of roads.

The President balanced the stick with the carrot of a “national reconciliation committee” to promote “national dialogue@ and another committee to examine proposed constitutional amendments tabled by the opposition.

Marking the end of his first year in office, Morsi said, “Some things were achieved and others not. I have made mistakes on a number of issues.” He apologised for fuel shortages, announcing measures to ensure that gas stations were functioning “in the public interest@.

The President admitted to young people that he had not done enough to involve them in the political system: “The youth were never given a chance to play a role in the country, and for that I am sorry. I will make sure they do soon.”

He ordered Cabinet ministers and provincial governors to appoint assistants under the age of 40.

HRW said that the authorities should address the role played by Salafi sheikhs against Shia families in Abu Musallim, where the attack took place.

“Morsy should state unequivocally that Shia in Egypt have the right to practice their religious beliefs without fear and intimidation, something he has failed to do,” Human Rights Watch said.