Iran Today: Promoting Ahmadinejad and His Man for President 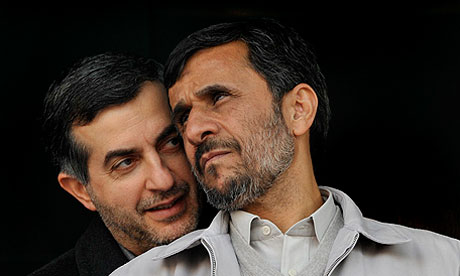 Presidential hopeful, former interior minister, and current head of the General Inspection Office Mostafa Pour-Mohammadi has said that the Principalist Coalition of Five will declare a candidate soon.

Pourmohammadi said that his coalition would not form an alliance with the 2+1 coalition, which comprises Tehran mayor Mohammad Baqer Qalibaf, the Supreme Leader’s advisor on International AffairsAli Akbar Velayati and MP Ghollam Ali Haddad Adel.

The sharp rise in Turkish gold to Iran since last year had been halted in January, suggesting a cut-off of a vital financial lifeline for the Islamic Repbulic amid sanctions blocking financial transactions.

However, the export of almost $381 million of gold to Iran in March, primarily in exchange for Iranian natural gas, indicates that Turkey is willing to risk US penalties.

Turkey, Iran’s biggest natural gas customer, has been paying Tehran for its imports in Turkish Liras, because American restrictions prevent payment in dollars or Euros. Iranians then use those liras, held in Halkbank accounts, to buy gold in Turkey, and couriers carry bullion worth millions of dollars in hand luggage to Dubai, where it can be sold for foreign currency or shipped to Iran.

Rising throughout the last year, Turkey’s gold exports to Iran peaked at $1.8 billion in July 2012.

MP Hossein Mahjoub claims, in an interview with the reformist newspaper Shargh, that 200,000 Iranians have lost jobs each year since 2005 and that more than 3000 production units have shut down.

With five days to go before hopefuls formally declare their candidacies, news in Iran is dominated by June’s Presidential election this morning.

State outlet Press TV — keen on showing a vibrant contest — are offering snapshots of almost all of the hopefuls. Pro-government state news agency IRNA, however, has another agenda: promotion of President Ahmadinejad and his would-be successor, Ahmadinejad’s right-hand man Esfandiar Rahim-Mashai.

As usual, IRNA is headlining a speech by the President — in this case, an appearance in Rasht in which he said “the pressures mounted by the West on Iran have backfired, and the West is now grappling with economic and political problems”.

This morning, however, the outlet also has Rahim-Mashai in its top stories, using his address on Wednesday to students, youth, and social workers.

The opening thrust is that people should not be afraid of Government — presumably Ahmadinejad’s Government, in Rahim-Mashai served as Chief of Staff.

There is also an interesting claim that American officials are seeking to meet Ahmadinejad, and general invocations to follow the “intellectual system of the Islamic Republic” and to pursue “freedom and dignity”.