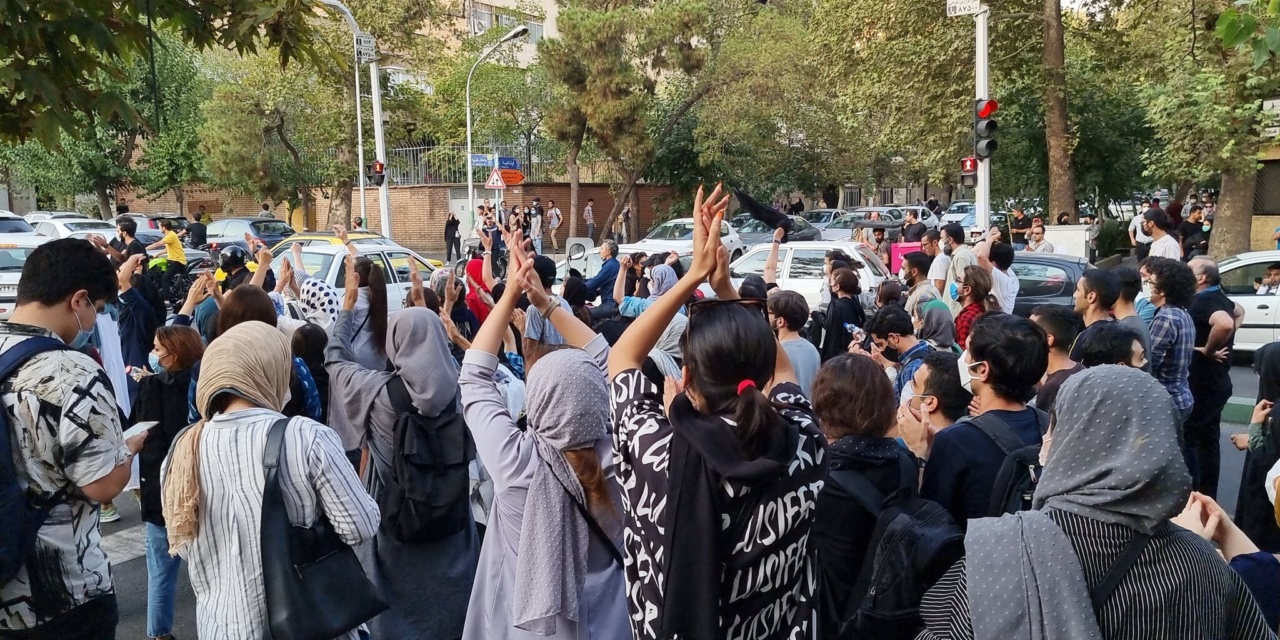 Iranian women in a demonstration over compulsory hijab and the death in custody of Mahsa Amini, October 2022

Originally written for The Guardian:

Iranian security forces are targeting women at anti-regime protests with shotgun fire to their faces, breasts, and genitals, according to interviews with medics across the country.

Doctors and nurses – treating demonstrators in secret to avoid arrest – said they first observed the practice after noticing that women often arrived with different wounds to men, who more commonly had shotgun pellets in their legs, buttocks and backs.

While an internet blackout has hidden much of the bloody crackdown on protesters, photos provided by medics to The Guardian showed devastating wounds all over their bodies from so-called birdshot pellets, which security forces have fired on people at close range. Some of the photos showed people with dozens of tiny “shot” balls lodged deep in their flesh.

See also Iran Video: Why Protesters Risk Everything for Freedom

The Guardian has spoken to 10 medical professionals who warned about the seriousness of injuries that could leave hundreds of young Iranians with permanent damage. Shots to the eyes of both women, men and children are particularly common, they said.

One physician from the central Isfahan province said he believed the authorities were targeting men and women in different ways “because they wanted to destroy the beauty of these women”.

I treated a woman in her early 20s, who was shot in her genitals by two pellets. Ten other pellets were lodged in her inner thigh. These 10 pellets were easily removed, but those two pellets were a challenge, because they were wedged in between her urethra and vaginal opening.

There was a serious risk of vaginal infection, so I asked her to go to a trusted gynecologist. She said she was protesting when a group of about 10 security agents circled around and shot her in her genitals and thighs.

Traumatized by his experience, the physician – who like all medical professionals cited in this article spoke on condition of anonymity for fear of reprisals – said he had a hard time dealing with the stress and pain he witnessed.

“She could have been my own daughter.”

Some of the other medical professionals accused security forces, including the feared pro-regime Basij militia, of ignoring riot control practices, such as firing weapons at feet and legs to avoid damaging vital organs.

One doctor from Karaj, a city near Tehran, said security forces “shoot at the faces and private body parts of women because they have an inferiority complex. And they want to get rid of their sexual complexes by hurting these young people”.

The Ministry of Foreign Affairs was approached to comment on the allegations made by the medics but has yet to respond.

A Pattern of Misogyny

Activists say such horrific gender-based violence is no surprise given the misogynistic rule of Iran’s ayatollahs, who took power in the 1979 Revolution and have maintained control with brute force, often against women.

But it was the death in September of 22-year-old Mahsa Amini that ignited the boldest challenge to the hardline theocratic rule of the country’s clerics.

Amini was arrested for improperly wearing her headscarf and then apparently beaten into a coma by Iran’s morality police. In the days after her death, girls and women nationwide defied the legally-imposed dress code and ripped off their hijabs.

Tehran has repeatedly blamed foreign enemies for the strife and accused “terrorists” of killing dozens of security force members. That conflicts with statements from the UN Office of the High Commissioner for Human Rights, which said more than 300 people have been killed so far in the crackdown, including more than 40 children.

And while the UN Human Rights Council has adopted the resolution to create a new fact-finding mission to investigate alleged human rights violations, investigators are unlikely to be admitted to the country.

Part of Tehran’s campaign of intimidation has included threats to doctors who treat the wounded.

Facing such dangerous conditions, a doctor from Mazandaran) said she was removing pellets, which are sometimes metal and sometimes plastic, with the lights off to avoid detection. “The women are so ashamed to go to the hospital that many are treated at home and that’s very dangerous.”

On October 26, hundreds of medics protested outside the medical council of Iran, and were shot with pellet guns by the security forces. A surgeon from Tehran treated his colleagues who were shot in their backs and legs while running away.

The surgeon said he treated serious injuries of at least five protesters who were shot at a close range by pellet guns. “One of the injured people I treated wasn’t even protesting. He was a bystander … and thought he wouldn’t be shot at. They’re shooting blindly at everyone who’s not one of them.”

Brian Castner, a senior crisis adviser on arms and military operations at Amnesty International, said the injuries shown in the photographs provided by the doctors to the Guardian were broadly consistent “with the use of birdshot, which is designed for hunting and has no place in any legitimate or lawful use of force by police”.

He said it would be hard to gauge from the photos alone what parts of the body were targeted, or from what range, as birdshot shotguns are indiscriminate by their nature as they spray out pellets. At least one photo showed what appeared to be a large single “slug” projectile, Castner said, which is used for hunting big game, such as deer. “The person who was hit is very lucky they were not hit in the chest or head and killed. There has been some evidence I have seen before of slug use, but this is a clear example.”

The Tehran surgeon said that one case referred to him was a 25-year-old bystander who was shot in the face on 16 September, when the protests had just begun. “Pellets have hit his eyes, head and face … He is almost blinded in both eyes and he can only detect light and brightness with them. He is not in a good condition.”

It is one of hundreds of reports that have emerged of protesters losing their eyesight after being shot by pellets at close range. The Guardian has seen photos of people with pellets lodged in their eyeballs.

One case that grew to national prominence was an attack on a student from the port city of Bandar Abbas, who was shot in her right eye. Ghazal Ranjkesh shared on her Instagram profile that she was shot while on the way back from work.

“The last image that my right eye saw was the smile of the person shooting at me,” she wrote in a post that has now been deleted after it was widely shared on protest groups and social media, creating a backlash.

More than 400 ophthalmologists from Iran have signed a letter alerting Mahmoud Jabbarvand, Secretary General at the Iranian Society of Ophthalmology, to what appears to be the deliberate blinding of protesters.

One of the ophthalmologists who signed the letter said they had treated four patients who lost some or all of their eyesight, including one 20-year-old man whose X-ray showed 18 pellets in his head and face.

I felt horrible, I felt so angry and I had tears in my eyes looking at their pain. The eye is the most sensitive part of the human body and it is very painful to think about these injured people who are all young and have to live with this disability and low vision for the rest of their lives. I heard many similar cases from my colleagues and the cases of eye damage in the recent protests are much more. It’s more than 1,000 cases.

He added that they are yet to receive a response to the signed letter.

The Guardian shared photos of eye and facial injuries sustained at the protests with Iain Hutchison, an oral and facial surgeon in the UK who founded the surgical research charity Saving Faces.

The nature of the injury, he said, suggested “that they would have been held down or held still and not had the ability to move their head away”.

Knowing that demonstrators will need medical treatment for such severe injuries, authorities have increased surveillance at hospitals. A doctor from a hospital in Shiraz said that a new security guard has been stationed outside the emergency ophthalmology department there late last month.

He controlled whoever was entering and exiting the emergency ophthalmology department, and he asked to see our identity cards and tags each time. It was the first time I saw this happening in the hospital. It looked like this addition to the guards happened after an increasing number of protesters with eye injuries were admitted.

In other parts of the country, particularly in the Kurdistan region where the government has blockaded whole cities, volunteers are having to smuggle in bandages and medicine on foot.

Soran Mansournia, a Kurdish human rights activist and part of a committee of doctors who has been coordinating with locals to deliver medicines and treat wounded protesters secretly, said:

The number of wounded is very high. Every day we hear about the death of an injured person who did not go to hospital out of fear of arrest.