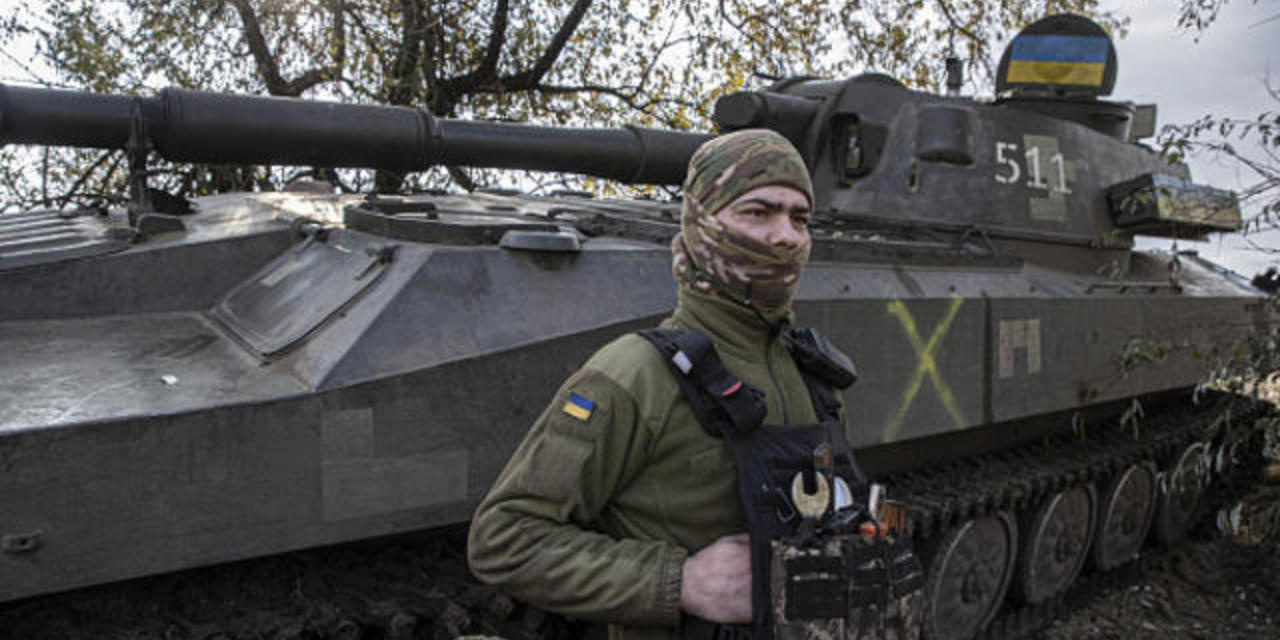 A Ukrainian soldier on the frontline as Russian forces withdraw from Kherson city in southern Ukraine, November 9, 2022 (CBS) 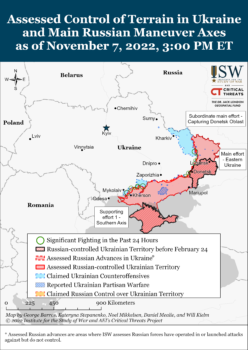 Ukrainian forces have reportedly liberated the village of Kyselivka are closing on Chornobaivka, 15 km (9 1/2 miles) northwest of Kherson city and not far from the regional airport.

The commander-in-chief of Ukraine forces, Gen. Valeriy Zaluzhny, says troops have advanced 7 km (4.3 miles) to liberate another 12 settlements near Kherson.

He noted, “Just as the enemy withdrew from Kyiv and Kharkiv regions and left Zmiinyi, the likely withdrawal from Kherson is the result of our active actions.”

The Biden Administration has reportedly refused Ukraine’s request for advanced drones because Washington wants to avoid an escalation with Russia.

US officials said the delivery of the Gray Eagle MQ-1C drones could signal to the Kremlin that the US is providing weapons which could target positions inside Russia.

The commander of the US Joint Chiefs of Staff, Gen. Mark Milley told an audience on Wednesday that more than 100,000 Russian troops have been killed or wounded in Ukraine.

Milley assessed that Ukrainian forces have “probably” suffered a similar level of casualties, with the likelihood of 40,000 Ukrainian civilians killed.

ORIGINAL ENTRY: Vladimir Putin faces the defeat of his invasion, as Russia’s forces withdraw from Kherson city in southern Ukraine after an occupation of more than eight months.

The Kherson region was seized in the opening days of the February 24 invasion. Putin highlighted the occupation as a victory central to his plan to overrun Ukraine and topple the Zelenskiy Government.

Even as Kyiv turned the tide of the war with its counter-offensives, including in the Kherson region, Putin continued his presentation of triumph. On September 21, he declared the annexation of Kherson as well as the neighboring Zaporizhzhia region in the south and Donetsk and Luhansk in the east.

But on Wednesday, Russian Defense Minister Sergey Shoygu confirmed reports of an imminent withdrawal, ordering troops to cross to the east bank of the Dnipro River.

Gen. Sergey Surovikin — approved overall commander of the Russian invasion only a few weeks ago — told Shoygu on national TV that he had recommended the withdrawal:

Kherson cannot be fully supplied and function. Russia did everything possible to ensure the evacuation of the inhabitants of Kherson.

The decision to defend on the left bank of the Dnieper is not easy, at the same time we will save the lives of our military.

Earlier in the day the retreating Russian forces blew up the bridges out of Kherson city, hoping to check any Ukrainian pursuit.

They are panicking. The occupiers are preparing their withdrawal. They are disabling the bridges to deter our advance.

The Russians also reinforced positions south of Snihurivka, having left the village, to give cover to retreating troops.

The liberation of Kherson city and the surrounding area will open the way for Ukraine to establish “fire control” over the supply lines to Russian-occupied Crimea, 100 km to the south.

Ukrainian officials maintained caution over their apparent victory, noting that the invaders still hold the region to the east of the Dnipro River and that newly-mobilized — if poorly-trained and poorly-supplied — men are being sent to the frontline.

In his nightly address to the nation, President Volodomyr Zelenskiy said:

The enemy does not bring us gifts, does not make “gestures of goodwill”. We fight our way up.

And when you are fighting, you must understand that every step is always resistance from the enemy, it is always the loss of the lives of our heroes.

Therefore, we move very carefully, without emotions, without unnecessary risk. In the interests of the liberation of our entire land and so that the losses are as small as possible.

Senior Zelenskiy advisor Mykhailo Podolyak said, “Until the Ukrainian flag is flying over Kherson, it makes no sense to talk about a Russian withdrawal.”

Actions speak louder than words. We see no signs that Russia is leaving Kherson without a fight. A part of the ru-group is preserved in the city, and additional reserves are charged to the region. 🇺🇦 is liberating territories based on intelligence data, not staged TV statements.

They are moving out but not as much as would be taking place if it was a full pullout or regrouping.

And for the moment, we don’t know their intentions – will they engage in fighting with us and will they try to hold the city of Kherson? They are moving very slowly.

Reacting to the defeat, key allies of Putin expressed support, while also building the possibility of challenging him if the military turned against his command.

Yevgeny Prigozhin, the founder of the Wagner Group mercenaries, said, “Of course, this is not a victorious step in this war, but it is important not to agonize, not succumb to paranoia, but to draw conclusions and work on our mistakes.”

Prigozhin has been taking a higher profile as Ukrainian forces have fought back and gone on the counter-offensive. For the first time, he acknowledged his leadership of Wagner, recruiting men — even prisoners — for the battlefield. The group also made a show of opening its first public headquarters.

He and Ramzan Kadyrov, the Kremlin-designated head of Chechnya, have pressed Putin to sack a series of commanders and to appoint replacements they prefer.

One of those replacements was Gen. Surovikin, who assumed overall command last month.

After weighing all the pros and cons, General Surovikin made a difficult but correct decision… everyone knew that Kherson is a difficult combat territory from the very first days of the special operation.