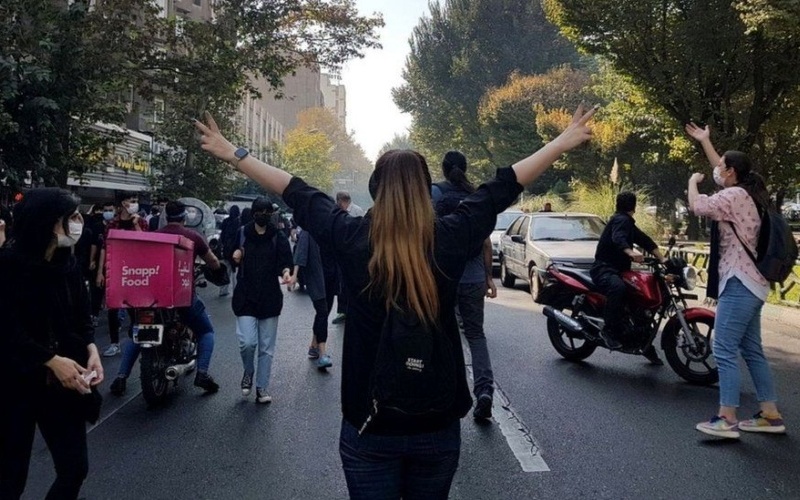 On September 13, Mahsa Amini, a 22-year-old woman from Kordestan Province in northwest Iran, was visiting the capital Tehran alongside her brother. She was seized by “morality police” for “inappropriate attire” and bundled into a van, where — according to multiple Witnesses — she was beaten by an officer.

While awaiting interrogation in a police station, Amini collapsed and fell into a coma. She died on September 16 in hospital, having never regained consciousness.

Iranian officials asserted that she died of a heart attack, having suffered from diabetes, epilepsy, a childhood brain tumour, and hydrocephalus. Amini’s mother said her daughter was in “perfect health condition”. Her father reiterated, “She did not have any disease. Those who say that she had epilepsy or underlying disease are lying.”

Medical staff at the hospital leaked the information, “Her brain tissue was seriously damaged. it was clear that the patient was not injured by a single punch and must have received many blows to her head.”

As news spread of Amini’s death, crowds began to gather outside the hospital, elsewhere in Tehran, and in her hometown of Saqqez in Iranian Kurdistan.

Three weeks later, protesters continue to defy repression by security forces, detentions, and restrictions on the Internet. They are challenging the legitimacy of a hardline regime whose authority is eroding.

They chant, “Women. Life. Freedom.” They confront the Supreme Leader and his inner circle, “Mullahs Get Lost. Death to the Dictator.”

Iranian schoolgirls take off head coverings and tear pictures of Ruhollah Khomeini, founder of the Islamic Republic, to chants of "woman, life, freedom" and "death to the dictator" on day 19 of protests in Iran over the death of #MahsaAmini.#مهسا_امینی pic.twitter.com/36vaBoFq94

A Persistence of Protest

Activists inside Iran and analysts outside it assess that these protests could be the most serious challenge to the regime since millions marched after the disputed 2009 Presidential election, in which the Supreme Leader’s office ensured that Mahmoud Ahmadinejad “won” over challenger Mir Hossein Mousavi.

There have been recurrent nationwide demonstrations since then. In December 2017, ten days of rallies were spurred by economic conditions as well as compulsory hijab. In November 2019, up to 1,500 people were killed during four days of protests sparked by a sudden rise in petrol prices. At the local level, there are demonstrations over pay and working conditions, the environmental situation, and detentions.

But in these cases, mass rallies have ebbed after a few days. It has appeared that, after a show of anger and demand for rights, Iranians have returned to resignation over their economic hardship and lack of political and social space.

The hijab-Amini protests have not receded so far, despite the regime’s use of force and effort to shut down communications. They are not just in the capital Tehran and a few other big cities. Unsurprisingly, there have been widespread demonstrations in Iranian Kurdestan — for which Iran’s Revolutionary Guards have retaliated with deadly strikes on Kurdish camps in northern Iraq — but also in almost every area of the country.

Nor is this a display of resistance from only one group. Women, some of them taking off or not wearing the hijab, have been prominent. Gatherings at universities have been significant, but older Iranians are also participating.

The regime has not been able to close down the movement with a staged counter-protest, as it did with mass rallies in December 2009. Events after Friday prayers on 23 September brought out only tens of thousands, far from the “millions” proclaimed in State media. Another effort two days later mobilized even fewer people.

As always with mass protests, Iranian authorities have tried to portray the rallies as plots orchestrated by the US, Israel, Saudi Arabia, “mercenaries”, and “terrorists”.

But so far, the attempt to tear down the protests has not gained the upper hand. While security personnel have been killed in clashes — the regime claims 11, but Amnesty has documented four cases of possible “false narratives” — the vast majority of demonstrations are non-violent and the expression of Iranians, rather than devious foreign elements.

Three women attach a banner for #MahsaAmini, who died in morality police custody, to a motorway bridge in Isfahan while waving their headscavres in the air on day 20 of protests in Iran. The banner reads: "One of us will be the next one"#مهسا_امینیpic.twitter.com/sRGLI6Drqi

The regime’s concern with its inability to quash the demands for justice and rights was tipped off on Monday in the Supreme Leader’s address to graduating police cadets. In his first public comments on Amini’s death — “a tragic incident that saddened us” — he railed, “The recent riots and unrest in Iran were schemes designed by the US; the usurping, fake Zionist regime; their mercenaries; and some treasonous Iranians abroad who helped them….How can some people not see the US and Israel’s hands in this event?”

The Challenge of Spontaneous Protest

The demonstrations have widened beyond Amini’s death. Compulsory hijab is a marker of concerns about the regime’s social restrictions on women and on all Iranians. The chants of “Freedom, Freedom, Freedom” point to the campaign for political space.

But this is not, as Ayatollah Khamenei wants to portray it, an attempt at “regime change”. As in 2009, the aspiration of most protesters is for reforms within the system, rather than its removal.

Demonstrators emphasize that this is a movement with “no leader”. In 2009, the Green Movement and Presidential candidate Mousavi were at the forefront. In 2022, Mousavi — under strict house arrest since February 2011 — is limited to a brief statement calling on armed forces to avoid repression and to “stand on the side of truth and nation”.

That raises a challenge beyond the short-term. How long can the spontaneous pursuit of rights continue without organization? Should a specific platform, beyond demands for an end to compulsory hijab and for the abolition of “morality police”, be produced?

Still, the demonstrations have accomplished the Wizard of Oz task of pulling the curtain back on a regime which rules by coercion and patronage rather than acceptance.

The mass marches in 2009 highlighted the discontent of many Iranians as well as their aspirations for a system which was not manipulated by the Supreme Leader through his functionaries and the Revolutionary Guards.

The regime was able to shut down the aspirations, but it has not conquered discontent. The economic situation has deteriorated throughout the past 13 years. Inflation is officially at more than 52%, with higher rises for food and other essentials. There has been only a small rise in GDP after declines of 6% to 7% in 2018 and 2019. Only 1/3 of jobs lost during the COVID-19 pandemic have been recovered. This week the Iranian rial set a new all-time low against the US dollar of 334,200:1.

The 2015 nuclear deal offered a window for opportunity for recovery. However, that soon narrowed and was shut in 2018 by the Trump Administration’s withdrawal and its expansion of the US sanctions. The renewal of that agreement, with American re-entry and the lifting of the restrictions, has been stalled for months over Iranian demands such as strict limits on inspections of its nuclear facilities.

Meanwhile, the regime took an even harder line at home. After his miscalculation led to the unexpected victory of the centrist Hassan Rouhani in the 2013 Presidential election, the Supreme Leader accepted the outcome. Rouhani was allowed to pursue the nuclear talks, while being blocked from initiatives in foreign policy or any steps to limit the growing power of the Revolutionary Guards.

The tactic meant that the President was a firewall for Ayatollah Khamenei. The Rouhani Government took the blame for the economic difficulties as for the failure — because of the hardliners’ stonewalling — to deliver social reforms.

In 2021, Khamenei and the hardliners consolidated their domestic position. They used a “managed election” put the head of judiciary Ebrahim Raisi into the Presidency.

But now they had no firewall against the mounting problems of Iranians.

Even as Khamenei proclaims that “the Iranian nation emerged completely strong as it did before”, his regime finds itself increasingly isolated.

The stalemated nuclear talks means that there is no prospect of renewed links not only with the US and Europe but also with much of Asia. China is happy to take discounted Iranian oil, but cautious about political ties. India is looking to Khamenei’s “enemies” — with Delhi alongside the US, Australia, and Japan in the Quad — rather than to Tehran. In the Middle East, the regime is contending with an unstable situation in Iraq, and talks for reconciliation with Saudi Arabia are making slow progress.

Perhaps most importantly, a vaunted alliance with Russia is tethered to Vladimir Putin’s failing invasion of Ukraine. Far from seeing an economic boost, Iran finds itself as a supplier of “kamikaze drones” to Moscow with no payment, other than being handcuffed to another heavily-sanctioned system which could soon be in upheaval.

A Matter of Legitimacy

The photo is of a group of schoolgirls in a classroom. Their backs are to the camera, possibly to avoid identification that could risk their security. They have taken off their dark blue hijabs.

They are raising the middle fingers of each uplifted hand in a gesture of celebration and resistance.

The fingers are being raised to a photo of the Supreme Leader and of Ayatollah Khomeini, the founder of the Islamic Republic.

Khamenei has insisted that: “Whenever the enemies plan on creating unrest anywhere, it will be the courageous and faithful people of Iran who will stand up to them the most.”

Unfortunately for him, the courageous and faithful on the streets and in the classrooms of Iran beg to differ.