Afghanistan: Taliban Beat Women Who Were Protesting A Suicide Bombing 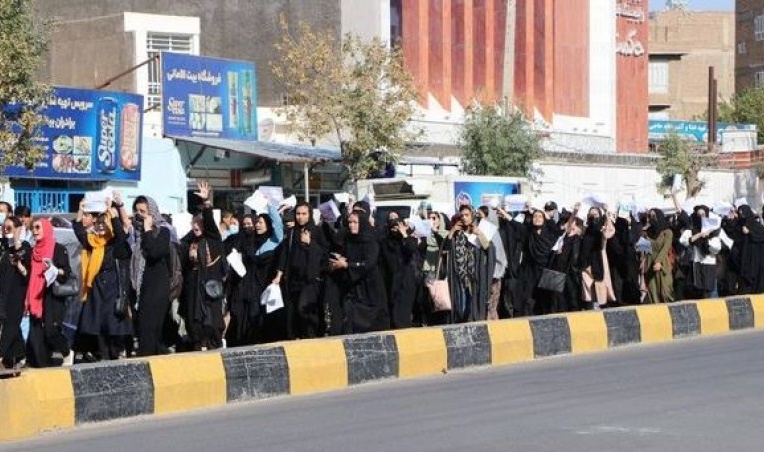 Originally published by The Guardian:

Women protesting against the suicide bombing of a school in Afghanistan, which killed 35 young Hazara women and girls on Friday, have been beaten and shot at by the Taliban, according to witnesses.

Those who died in the attack were mostly Hazara women aged between 18 to 24 years who had been preparing for an exam.

Women who gathered to demonstrate against the killings on Friday said Taliban forces opened fire and used physical violence to break up the protest minutes after it had started.

“We were marching together and chanting for justice for our Hazara sisters who were murdered yesterday. This is a genocide of the Hazaras and all we want is education and freedom,” said one Hazara woman.

“The Taliban will never protect us and they can’t represent us in the international community. They attacked us with the edge of their guns and beat us up. I am still in pain as I speak.”

“The Talib sprayed pepper spray in our eyes, whipped us and humiliated us by calling us prostitutes who take money from the west to protest,” said another protester who did not want to be named.

No group has claimed responsibility for Friday’s attack, but the Hazara community is increasingly coming under attack by the Islamic State Khorasan Province, the Islamic State’s affiliate in Afghanistan according to human rights groups.

Public anger about the attack has intensified over the weekend, with protests spreading to Bamyan and Herat Provinces.

Hundreds of women marched from Herat University on Sunday morning demanding their right to education and safety for Hazaras. Witnesses confirmed that Taliban shot repeatedly at the women, with one of them grabbing a protester by her headscarf and pushing her to the ground.

“These are the god-fearing men who are ruling this country? Taliban officers are now grabbing us by our hijabs and hair to threaten us and stop us from protesting. We won’t stop fighting,” said one protester.

The killings have devastated the Hazara community in Dasht-e-Barchi, with families still trying to retrieve the remains of their daughters and demanding justice.

Waheda, a 19-year-old student who was injured in Friday’s attack, said: “My friends and I arrived at 6.30 am to prepare for the test which is usually held on Fridays. Just after 7 am I heard the bomber open fire and the sound of an explosion.

“We wanted to run but everything was destroyed so I hid under the chairs. When I heard the explosion turn louder, I ran towards the exit. While running away, I saw bodies covered in blood, one of them had lost her leg, another an arm. My leg was wounded so I jumped up a wall and escaped. I just wanted an education but I didn’t think we would be killed for this.”