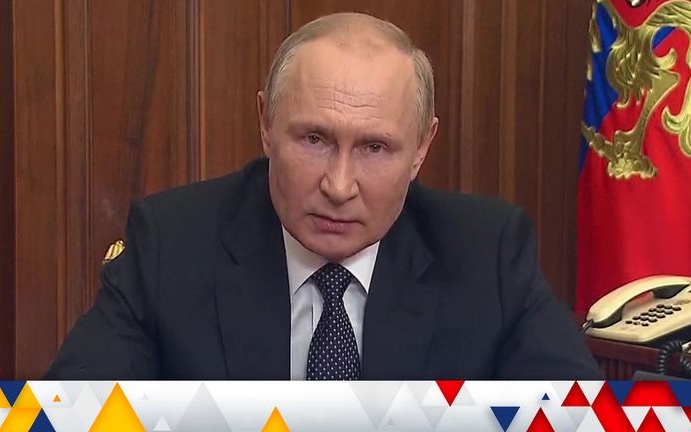 I also spoke with Turkey’s ANews and India Ahead on Wednesday about Vladimir Putin’s attempt to stave off defeat with a declaration of partial mobilization and annexation “referenda” in Russian-occupied eastern and southern Ukraine.

Putin told Russians that this would be a quick “operation” and wouldn’t affect many of them. Now he’s having to admit that the war will not be quick without saying that Russia is being defeated in areas like northeast Ukraine.

Professor of American Studies at University of Birmingham @ScottLucas_EA joined us to discuss Putin's speech. pic.twitter.com/N2NQ8d348G

Putin has isolated himself from those who were trying to stay neutral.

Imagine what Indian Prime Minister Modi must be thinking right now: “I told this man to stop and negotiate, and a few days later he’s thrown this back in my face and is threatening the use of nuclear weapons”.

Days after PM Modi's Not-A-Time-For-War suggestion, war clouds again as #VladimirPutin orders partial mobilisation of Russian forces | "It's not a bluff"- Putin warns the West; Are we staring at turbulence ahead? @bhupendrachaube @ScottLucas_EA @UmitNazmi #UkraineRussiaWar pic.twitter.com/TMD7sq7F2j

Listen to Discussion from 10:14

He lost the gamble that he could quickly capture Kyiv and topple the Zelenskiy Government.

He is losing the gamble that his troops could seize more territory in the east and south of Ukraine.

ORIGINAL ENTRY: As Vladimir Putin faces the failure of his invasion of Ukraine, I spoke with Australia’s ABC and London’s Times Radio about the state of the conflict and Putin’s next steps.

In a Tuesday chat with Beverley O’Connor, I begin with Putin’s increasing isolation, explaining China’s caution and the face-to-face message from Turkish President Recep Tayyip Erdoğan to stop the war — and why this will not stop the Russian leader from persisting with his losing invasion.

Putin has invested not just his present but also his legacy in conquering most of Ukraine.

So when does he put his hands up and say, “I haven’t achieved that”?

I then address how to pursue accountability and justice over Russia’s war crimes: “While the investigation is carried out, it’s important — not just as analysts but as human beings — to remember that we are talking about thousands of civilians murdered and to cut through the Russian disinformation.”

And I pre-empt the Kremlin’s endorsement of the staged “referenda” for annexation of occupied territory: “It won’t stop the Ukrainian military pressure, and it doesn’t reflect that most people in Ukraine are welcoming the liberation of their areas rather than saying we want to stay with Moscow.”

I spoke with Anna Cunningham about two hours before Putin’s statement on Wednesday morning, anticipating the challenges over his partial mobilization and backing of the “referenda”.

This isn’t a carefully-organized vote. It’s a sham process, but it’s one the Russians have to stage to pretend they have even a shred of legitimacy….

The prospect is not that you will have an easy transition for these territories to become part of Russia, but that Kyiv is going to liberate more and more territory — including some territory that Russia has effectively held since 2014.