Iran’s Mahsa Amini Protests: “This Time, We Won’t Back Down. They Can’t Kill All of Us” 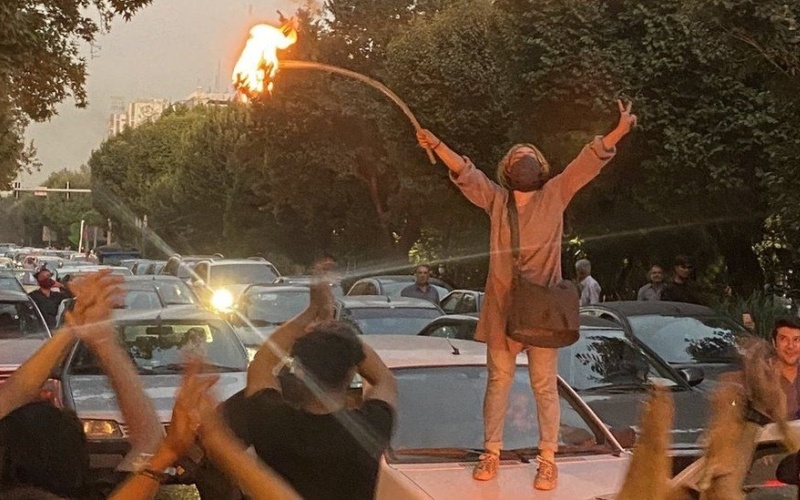 A woman in Tehran, Iran sets fire to her hijab during protests over the death of Mahsa Amini in police custody, September 20, 2022

Originally written for The Quint:

“My heart would start beating fast and I would start sweating whenever I spotted chador-clad women on the subway. I knew they were the morality police, just by looking at their shoes,” says Nergis, a 21-year-old Tehran resident.”

“Everyone’s out there to stifle our voices. We’ve been in an open prison since childhood. Why should we live like criminals?” she asks.

For days, Nergis has joined the hundreds of women and men at Keshavarz Boulevard in Iran’s capital, protesting against the death of 22-year-old Mahsa Amini in police custody.

Popular among university students, Keshavarz Boulevard has been the go-to spot for some of the largest anti-regime protests over the years. On the evening of 20 September, to show solidarity with women across the country and to seek justice for Mahsa, students burned their headscarves.

Iranian police responded with tear gas, rubber bullets, and batons to punish the protesters. Nergis was one of the victims.

But despite the crackdown, the demonstrations continued for the seventh consecutive day on Thursday.

“They Beat Us With Batons”

Nergis arrived at the protest site at around 6 pm on September 20, joining the crowd’s chants of “Death to [Supreme Leader] Khamenei. Soon the riot police surrounded the protesters:

An hour after the protest started, the police shot at us. They used tear gas and chased us on motorcycles. They shot me with rubber bullets and beat me with batons. Even after this violence, the chants of “Death to Khamenei” only got louder and louder.

In Iran, where a social media post can land you in prison or worse, protests and chants of death for the Supreme Leader are risky defiance. But for years, Iranian women have had to marry against their will, keep quiet about domestic violence, and adhere to the regime’s dress code.

Mahsa’s death has fuelled our fight for freedom. I always protested on social media, but now we’ve reached a point of no return. We have no fear.

My body is in pain after the police beat me with batons yesterday. I hardly slept and had to cover my bruises from my family. Yet, I am on my way to Keshavarz Boulevard to call for an end to Khamenei’s dictatorship.

This time, we won’t back down. They can’t kill all of us.

Nargis said the riot police patrolled the streets of Tehran until the early hours of September 21, following protesters home. When demonstrators regrouped that evening, they held up black scarves and chanted, “Hijab is a symbol of oppression.”

The riot police again shot at and beat some of the protesters on their heads, from Keshavarz Boulevard to other Tehran landmarks such Vali Asr Square, Enghelab Square, and Vasal Street.

“Today [September 21], the number of protesters was five times more, and so was the oppressive regime’s police. More brutal than yesterday,” Nergis said.

“I Can’t Be A Mute Spectator Anymore”

Mahsa, an ethnic Kurdish woman, died after slipping into a coma on September 16. Three days earlier, she and several women were detained by Iran’s morality police, the Gasht-e Ershad.

On September 19, the killing of three protesters by Iranian security forces was confirmed dead. Iranian officials denied shooting at protesters, but Mehjabin, a medical professional, said:

They did open fire. They opened fire on protesters in Mahsa’s hometown Saghez, too. With the way they beat up protesters with batons last night in Tehran and in Mashhad, the number of dead protesters will only rise in the coming days.

Mehjabin is a 46-year-old midwife and mother of two sons. A native of Isfahan, she has followed the regime’s strict hijab rules ever since she was a little girl.

Moving to Tehran after her wedding in 2007, she noticed that although the women in the capital enjoyed certain liberties, hardliners maintained control.

Young girls in Iran wore loose headscarves and knee-length robes with trousers. I often thought they had so much freedom. But in the past decade, the rules got stricter. They were not only forced by families to obey them but also feared the rude morality policewomen. They would humiliate and beat up girls for wearing bright colours on the train.

I can’t be a mute spectator anymore. The deaths of men and women in the 2019 uprising broke my faith in the regime. Mahsa’s death is just the final nail in the coffin.

Since Mahsa’s death, protests have spread from the capital across Iran, including two of the holiest cities of the country – Mashhad and Qom. The former is home to the Imam Reza holy shrine and the world’s largest mosque. It is also the birthplace of the Supreme Leader, Ayatollah Khamenei. Qom, known as Iran’s Vatican, is the center for the training of clerics.

Women and men have confronted the police in these cities and others, protesting and burning headscarves. In Sari, a large group took over the town hall and tore down pictures of Iran’s first Supreme Leader, Ayatollah Khomeini.

Women in Iran have been forced to follow a mandatory hijab code since the Iranian revolution of 1979. For more four decades, Iranian women have had to either follow the rules or be imprisoned.

But the Raisi Government has toughened the restrictions. On July 5, President Ebrahim Raisi ordered the enforcement of the “hijab and chastity” law, which requires women to not only cover their heads but also their shoulders and necks.

I call it the Talibanization of the Iranian society. Iranian girls are educated and we won’t back down. We always dressed modestly, but this new order has just unleashed a new hell on our women.

We will burn this regime down, along with our hijabs.