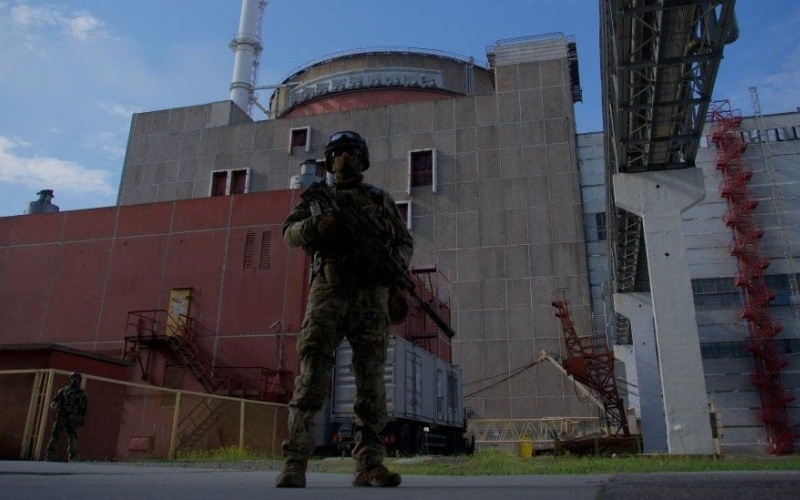 A Russian soldier stands guard at the Zaporizhzhia nuclear powr plant in southern Ukraine, May 2022 (Getty)

A third civilian has died from Thursday’s Russian missile strike on Kramatorsk in the Donetsk region of eastern Ukraine (see 1108 GMT).

Another 13 people were injured and 20 houses damaged in the attack.

The latest Russian attacks across the Donetsk region in eastern Ukraine have killed 5 civilians and injured 35.

Governor Pavlo Kyrylenko said two civilians were killed in Kramatorsk and one each in Bakhmut, Kurakhove, and Kodema.

Both ships left from the port of Chornomorsk. Barbados-flagged Fulmar Sis carrying 12,000 tons of corn to Iskenderun Province in southern Turkey. The Marshall Island-flagged Thoe is sailing to Turkey’s Tekirdag with 3,000 tons of sunflower seeds.

UK military intelligence assess that the two primary road bridges for Russian occupiers in the Kherson region in southern Ukraine can no longer be used for substantial military operations.

Even if the Russian repair the bridges, they will remain a key vulnerability.

Bolstered by the foreign supply of advanced weapons such as medium-range rocket systems, Urkainian forces have struck Russian logistical positions and ammunition depots. The attacks on bridges across the Dnipro River and its tributaries threaten to cut off Russian forces in western Kherson, including Kherson city, from compatriots in the east of the region.

Ukraine’s military said on Friday that it struck a Russian ammunition depot near a key bridge in the south. The command added its forces now can target almost all of the Russian supply lines.

Only 3.74 million tons of iron ore, worth $478 million, were delivered from January to June.

Russian iron exporters have lost up to a third of sales in foreign markets amid the invasion of Ukraine, and have been seeking to redirect shipments to Asia.

The decline in exports has been compounded by 26% fall in ore prices since January.

A further issue is Moscow’s propping up of the ruble, making Russian exports more expensive. Deputy Prime Minister Denis Manturov, who heads the Industry and Trade Minister, acknowledges the trade is now unprofitable in many cases.

ORIGINAL ENTRY: Russia has rejected a UN appeal for a demilitarized zone around the Zaporizhzhia nuclear power plant in southern Ukraine.

Russian forces occupied the plant, the largest in Europe and the site of six of Ukraine’s 15 reactors, in the first days of their February 24 invasion. They have converted the area into a military base, firing on Ukrainian cities and towns across the Dnipro River and using the nuclear facilities as a shield from any response by the Ukraine military.

In recent days, Ukrainian and Western officials have said that the Russians have shelled areas in the complex, damaging electrical transmission lines and putting the reactors at risk. The Ukrainian nuclear energy company Energoatom said Russian forces fired 10 shells on Thursday.

The facility should not be used as part of any military operations. Instead, it is necessary to urgently reach an agreement at the technical level on the establishment of a security perimeter and demilitarization in order to ensure the security of the region.

But Russia’s UN Ambassador Vasily Nebenzia bluntly rebuffed the appeal: “The demilitarization of the station can make it vulnerable to those who want to visit it. No one knows what their goals and objectives will be.”

They say it happens purely by chance, like “We didn’t mean to”. What can I say? Let’s not forget that the European Union also has nuclear power plants. And accidents can happen there, too.

On Thursday, International Atomic Energy Agency Director General Rafael Grossi said “political and other factors” had prevented the agency from sending a mission into the nuclear plant.

Grossi told the UN Security Council that preliminary assessment suggests there is no immediate threat; however, “this could change at any moment”: “This is a serious hour, a grave hour….Time is of the essence.”

In his nightly address to the nation, Ukraine President Volodymyr Zelenskiy reiterated, “Only a full withdrawal of the Russians…and the restoration of full Ukrainian control of the situation around the station can guarantee a resumption of nuclear security for all of Europe.”