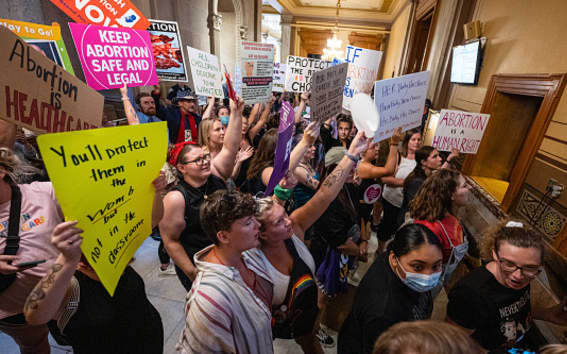 Demonstrators for a woman’s right to abortion during a special session of the Indiana Senate at the Capitol in Indianapolis, July 25, 2022 (Jon Cherry/Getty)

Indiana has adopted a near-total ban on a woman’s right to abortion, the first state measure since conservative Supreme Court justices overturned the protection in the Roe v. Wade precedent in June.

The law was signed by Governor Eric Holcomb, who called a special legislative session to enact the measure, only three days after voters in Kansas firmly rejected an amendment removing protections from the State Constitution.

Some Indiana Republican legislators opposed the restrictions as going too far. However, others complained that there were exceptions for pregnancies from rape or incest.

The bill also grants exceptions for fatal fetal abnormality or when the pregnant woman faces death or severe health risks.

Indiana had allowed abortion up to 22 weeks of pregnancy.

Abortion is now banned in 10 states, with another three expected to soon pass their complete restrictions. Four states ban abortion beyond six weeks of pregnancy.

Judges have blocked five states from implementing their bans.