EA on UK and International Media: The Damaged US Politics Behind A Mass Killing in a Texas School 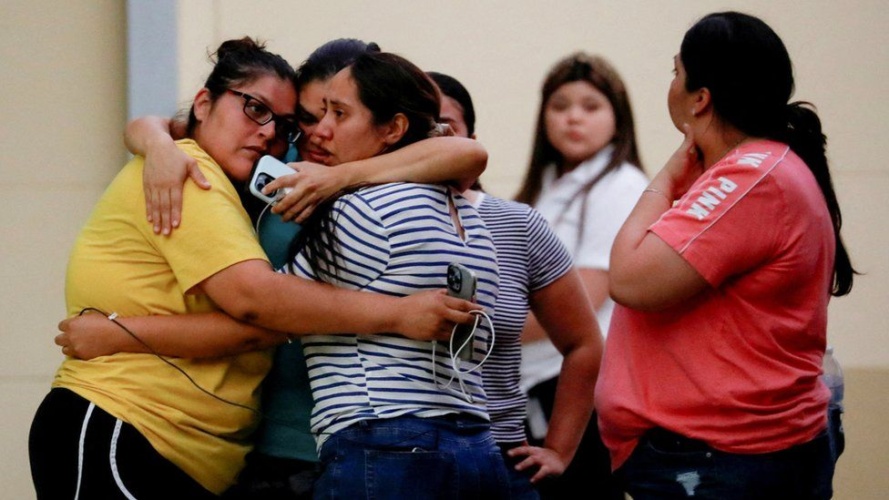 Relatives of children at at Robb Elementary School in Uvalde, Texas, console each other as they wait for news about the killing of 19 students and two teachers, May 24, 2022 (Reuters)

Following another US mass killing — four victims and the gunman dead in a Tulsa, Oklahoma hospital — I spoke with BBC Radio Scotland about the slim chance of action to stop the carnage.

Listen to Discussion from 36:40

We don’t hear about most, but the headline incidents are coming at us week by week: Tulsa, Uvalde last week, Buffalo the week before that. And I suspect you and I will be talking next week or the week after that.

Because this will not stop.

I spoke further with Turkey’s ANews on Monday about the significance of the mass killing at a primary school in Uvalde, Texas: the display of partisan politics in which Republican legislators are willing to sacrifice more lives, including those of children.

After the Uvalde school shooting that left 21 people dead, Texas Democrats are once again urging state leaders to enact gun control measures to help prevent similar tragedies in the future. Scott Lucas sheds the light on the matter.

The fact of the matter is that we can offer thoughts and prayers, but you and I will be talking about this every few weeks until there is a change in the political balance in the US….

Uvalde took place on a Tuesday. 72 hours later, the National Rifle Association had its annual conference in Texas and you had a fella named Donald Trump, Texas Senator Ted Cruz, and Texas Governor Greg Abbott who celebrated that there will be more guns — and trying to find something else to blame for this.

ORIGINAL ENTRY, MAY 25: David Dunn and I spoke throughout Wednesday with national and international outlets, including London’s Monocle 24 and France 24, about the damaged US politics and culture behind the mass killing of 19 children and two teachers in a primary school in Uvalde, Texas — and why little is likely to be done to stop the Groundhog’s Day of shooting sprees.

Listen to Discussion from 2:25:

The cold reality is this: while we have good intentions from Joe Biden, while we have rhetoric of “thoughts and prayers” — even from those who oppose gun control — the Republicans at national level are blocking any significant legislation and at state level are rolling back even the limited laws we have on the books….

The UK acted after Dunblane and Hungerford in the 1990s. Australia acted after Port Arthur in the 1990s. New Zealand acted after Christchurch in 2019. But the US is a damaged and paralyzed political culture — not because Americans are bad people, not because they don’t want something to happen, but because at its highest levels, its political system is bound up with division rather than dialogue.

An extract from my conversation with France 24:

Unless you get 60 votes in the 100-seat Senate, you and I will be talking again and again after each mass killing about what is not being done and will not be done about these murders.

🇺🇸 Why do mass shootings in the US keep happening?

Republicans have the majority in over half of the US states, and they are rolling back gun control measures, says @ScottLucas_EA.

He adds that nationally, Republican senators have blocked all progress in limiting gun access ⤵️ pic.twitter.com/kGT44HAC7r

How Other Countries Protect Lives

Only the military and the police are allowed to own handguns in the UK. And of course, it goes without saying that you are not allowed to own an assault rifle of the sort used in this massacre.

America is unique in the number of guns, including assault rifles, in the hands of its citizens — and the number of deaths resulting from those guns.