UPDATED: EA on BBC — Racism, the “Great Replacement” Hoax, and the Mass Killing in Buffalo 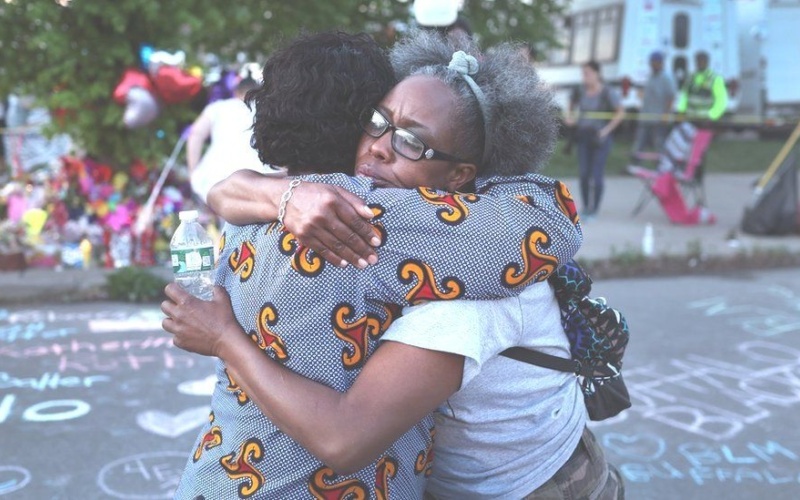 Mourners console each other outside the Tops supermarket in Buffalo, New York, where 10 people were killed (Getty)

Nine days after the killing of 10 people in a Buffalo, New York supermarket, I spoke further with BBC Radio London about the toxic combination of guns, racism, “replacement theory”, and right-wing mainstream US media.

The 10-minute full-and-frank discussion starts with the “sorrow of these lives cut short, simply because a man didn’t like the color of his victims’ skin and believed in the poison of this conspiracy theory that white people are being replaced in a plot by minorities”.

Then I pull no punches about a threat to US society from divisive politicians and media demagogues seeking attention and support by whipping up hatred: “a white supremacy being promoted not just on the fringes of the Internet, or someone shouting on a street corner, but by individuals night after night on top-rated TV programs or in the halls of Washington”.

But I try to conclude with a hope that America can be safer and better: “It is always darkest before the dawn, and in a very dark period in America, it is the prospect of that dawn that we have to hold onto.”

ORIGINAL ENTRY, MAY 17: What contributed to Sunday’s mass killing in a Buffalo, New York supermarket which killed 10 people?

I joined BBC Radio London on Monday to explain how guns, racism, the disinformation of the “Great Replacement”, and right-wing attack media are all accomplices.

The 10-minute discussion explains how the “manifesto” of 18-year-old Payton Gendron — and that of other recent mass killers — was fuelled by anti-semitism and the “Great Replacement”, a pernicious claim by pundits like Fox’s Tucker Carlson that Western elites are plotting the “replacement” of white populations by non-white immigrants.