The Walk Towards India’s Mass Killings Is No Longer Slow 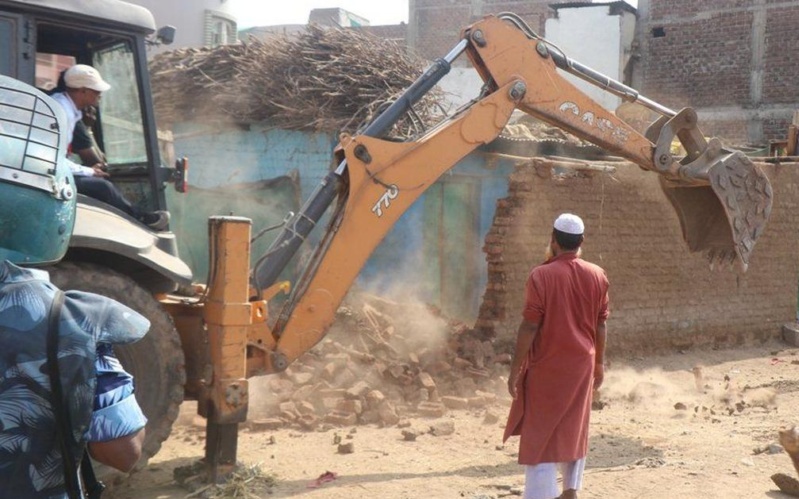 A man stands in front of the demolition of a Muslim home in Madhya Pradesh, India

Ramadan is a time when solace, peace and reflection go hand-in-hand with fasting and prayer — yet many Muslims in several Indian states are spending this holy month in fear.

Far-right Hindutva mobs have been coming out in force, making hate speeches and attacking places of worship during the Hindu festival of Ram Navmi. In my ancestral state of Gujarat, as well in Madhya Pradesh, West Bengal and Jharkhand, groups have used the birth date of Lord Ram as the pretext for the targeting of Muslims and other minorities — a rallying cry in sharp contrast with the deafening silence from authorities. Hordes of angry men, adorned in saffron clothing and sometimes carrying weapons, have entered Muslim neighbourhoods with chants of hates and allusions to the rape of women. Members of the Muslim community have retaliated by throwing stones, in clashes where police have sided with the Hindutva marches.

Some of the worst rioting has been in the state of Madhya Pradesh, a stronghold of Prime Minister Narendra Modi’s BJP, with about 10 homes burnt and 25 people injured. A curfew has been declared in the district of Khargone. Another 16 Muslim houses and 29 shops have been levelled by authorities after residents were accused of throwing stones at Ram Navmi processions.

In Gujarat, where Modi served as Chief Minister, violence has been reported from the town of Khambhat and the area of Himmatnagar. Shops and vehicles were set on fire, with at least one person dead.

Hate, violence and exclusion are weakening our beloved country.

The path to progress is paved with the bricks of brotherhood, peace and harmony.

Let’s stand together to secure a just, inclusive India. 🇮🇳

Another opposition leader, Manoj Kumar Jha, went further: “This should be the last warning signal for everyone that we are in the closest vicinity of a possible civil war with genocidal tenor.”

In its 2021 report on human rights around the world, the US State Department noted that Muslims in India are vulnerable to communal violence and discrimination, including forcible displacement, extrajudicial killings, degrading treatment or punishment by the police and prison officials, arbitrary arrests and detentions by government authorities, and even “lynching for suspected cow smuggling”.

The State Department cited the public parading of Muslim men, forced to chant “Jai Shree Ram” in Uttar Pradesh’s Kanpur, and police shootings during the eviction of villagers in Assam’s Darrang district. BJP-led state governments in Uttar Pradesh, Gujarat, and Madhya Pradesh have enacted anti-conversion laws to penalise “love jihad”, a label by Hindutva groups to push the conspiracy theory of Muslim men luring Hindu women into marriage and conversion to Islam.

In February, I wrote of my fear that India is slow-walking into a genocide: “In 2022, the issue is not inaction, It’s even worse: Modi and his Government are far from passive — they could be accomplices as India slow-walks towards mass killing.”

With provocations in Muslim areas, threats to Muslim women, and bulldozing of Muslim homes, I fear the slow walk is now a brisk march.