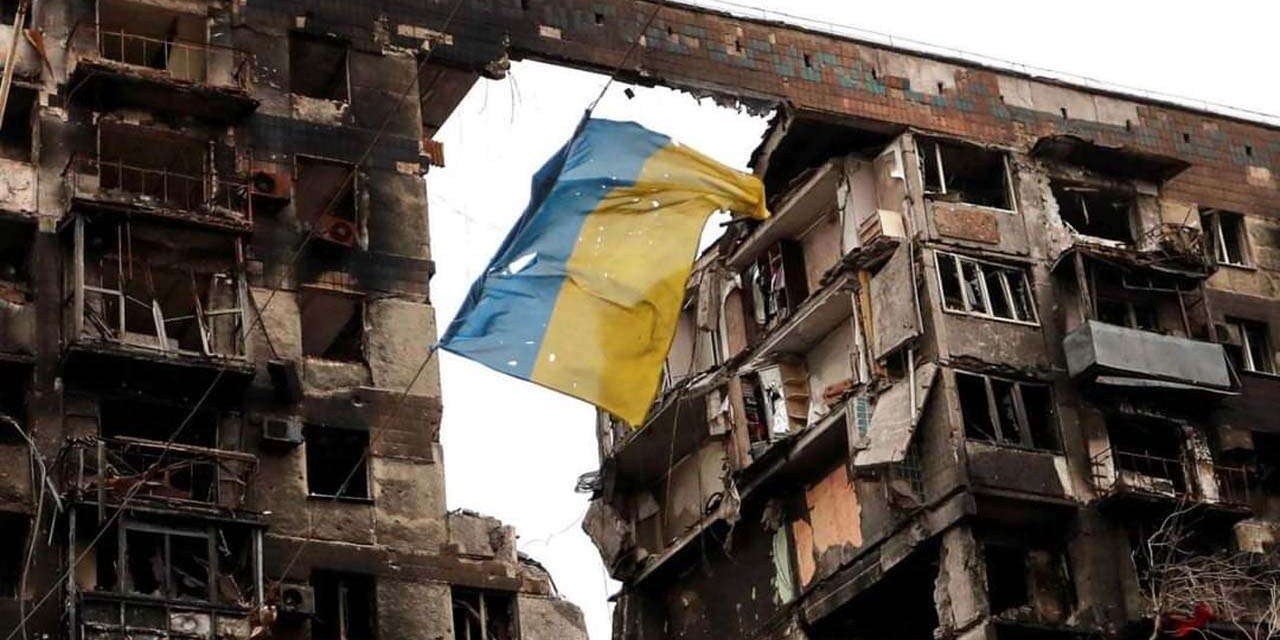 A tattered Ukraine flag flies amid destruction in Mariupol (Reuters)

EA on BBC: The Next Phase of Putin’s War on Ukraine

Russian families are expressing anger about the lack of information about the fate of their relatives aboard the sunken flagship Moskva.

The Russian Defense Ministry has only begun to notify the families of crew who did not survive last Thursday’s sinking, possibly after a Ukrainian missile strike.

Yulia Tsyvova was told on Monday morning that her son Andrei perished. She told The Guardian:

They didn’t tell me anything else, no information on when the funeral would be.

I am sure he isn’t the only one who died.

The only reported fatalities so far are Tsyvova and, via Ukrainian officials, the Moskva’s captain Anton Kurpin. Three other families have gone public about lack of knowledge over the fate of their sons.

They said that the entire crew was evacuated. It’s a lie! A cruel and cynical lie!

He said three other families have reached out to him for more information.

Ulyana Tarasova wrote online, “My son, Tarasov Mark, is missing in action aboard the cruiser Moskva,” before her post disappeared hours later.

Russia appears to be edging towards an acknowledgement that its Black Sea flagship Moskva sank last Thursday because of a Ukraine missile strike.

Sergey Markov, a political commentator who is a former close advisor of Vladimir Putin, told the BBC that the missile cruiser was hit by a NATO missile which was moved to Ukraine in January.

Lviv Mayor Andriy Sadovyi has responded to today’s Russian strike with four missiles that killed seven people and injured at least 11: “What we see today is genocide. It’s a deliberate action by the aggressor to kill peaceful civilians. All our cities and villages are in the same situation.”

Four people were killed in a garage and tire repair workshop. Two adults were critically injured, and a child was among the wounded.

Russian forces have entered Kreminna in the eastern Luhansk region in east Ukraine.

He said the Russians have “a huge amount of equipment”. The Olympus sports facility is “burning down” in a fire covering 2,400 square meters.

Haidai added that flight from the town is now impossible.

We planned the evacuation, literally along forest paths, so that the people would not come under fire. But overnight the situation changed. While fighting [is] in the city, it is unrealistic to count the civilians who remain there.

Video and pictures are circulating of what appears to be Russia’s Black Sea flagship Moskva, soon before it sank last Thursday, possibly after a Ukraine missile strike.

The 1st video of the Moskva missile cruiser before it sank, if photos posted last night are accurate. It was listing to one side & on fire inside & out, with the area around the bridge burning intensely from what Ukraine says was 2 missile strikes pic.twitter.com/0QpI1tzOrI

Lviv Mayor Andriy Sadovyi has confirmed that six people were killed and 11 injured in this morning’s Russian missile strikes.

He said about 40 cars were damaged and destroyed when a tire repair facility was struck. The windows were shattered in a nearby hotel, used to shelter evacuees from other areas of Ukraine.

He told residents, “The air alarm continues. Stay in the shelters.”

#Lviv one hour ago. At least 5 #Russia missiles hit the Western city. Train station and storage units were targeted. pic.twitter.com/rzMEbcs70z

The Russians also struck the city of Dnipro in east-central Ukraine with two missiles.

Two people were injured, as railway infrastructure was destroyed.

Ukraine is submitting the questionnaire for its membership of the European Union.

Ihor Zhovkva, the deputy head of President Volodymyr Zelenskiy’s office, said on Sunday, “Today, I can say that the document has been completed by the Ukrainian side,” told the Ukrainian public broadcaster on Sunday evening. “We expect the recommendation…to be positive, and then the ball will be on the side of the EU member states.”

The 6 a.m. deadline on Sunday passed with no official response from the Zelenskiy Government, the Ukrainian military, or local officials in the city in southern Ukraine. Prime Minister Denys Shmyhal told US television in the afternoon.

The city still has not fallen. There’s still our military forces, our soldiers. So they will fight to the end.

The Russian Defense Ministry claims to hold much of the city, in which about 100,000 residents are trapped without water, heat, or electricity and little food. However, Ukrainian fighters are still resisting in one of Mariupol’s two large iron and steel works.

A Russian Defense Ministry spokesman blustered on Sunday, “All those who will continue resistance will be destroyed.”

Ukraine President Volodymyr Zelenskiy explained that if Russia carried out the threat, “The destruction of all our guys in Mariupol – what they are doing now – can put an end to any format of negotiations.”

Digital Transformation Minister Mykhailo Fedorov, saying Mariupol is on “the verge of a humanitarian catastrophe”, said ofifcials are compiling evidence of Russian mass killings and war crimes: “We will hand everything over to The Hague.”

Mayor Vadym Boychenko estimates that 21,000 people have been killed, but as the Russians have taken away many bodies, a toll is unlikely to ever be established. Ukrainian officials, including Zelenskiy, say thousands more civilians have been forcibly transferred to Russia.

In early March, she recorded a video urging the world to help civilians in the besieged port city.

She stayed in Mariupol and fought to save people’s lives until the end.
pic.twitter.com/xMZRIIeqfw

Petro Andriushchenko, an advisor to Mayor Boychenko, said Russian forces are restricting movement within the occupied parts of Mariupol as well as preventing departure from the city.

“Hundreds of citizens have to stand in line to get a pass, without which next week it will be impossible not only to move between districts of the city, but also to be on the streets,” he wrote, suggesting that the occupiers are probably gathering information on residents.

Mariupol is at the eastern end of a 250-km (155-mile) coastal corridor along the Black Sea and Sea of Azov. In the initial days of its invasion, Russia seized cities such as Kherson and Melitopol, its only significant occupations in Vladimir Putin’s war.

The self-proclaimed head of the Crimea announced the creation of summer "retraining camps" for teachers from Kherson, Kharkiv and Zaporizhia regions. They will do this in order to move them into "Russian standards".

Anticipating Russia’s Offensive in the East

In his nightly video address to the nation, Zelenskiy also spoke of the possible Russian ground offensive to seize territory in the east:

They want to literally finish off and destroy Donbas. Destroy everything that once gave glory to this industrial region. Just as the Russian troops are destroying Mariupol, they want to wipe out other cities and communities in the Donetsk and Luhansk regions.

The head of the Luhansk regional military administration, Serhiy Gaidai, repeated that residents should evacuate immediately.

Noting that cemeteries are “getting bigger by the day”, Gaidai said, “Next week may be difficult. [This] may be the last time we still have a chance to save you.”

The Ukrainian military said Russian forces are “completing the creation of an offensive group” in the east, and also expects that Russian forces “will continue to fight to reach the administrative borders of the Kherson region” in the south.

In his nightly address, Zelenskiy appealed to other countries:

We are doing everything to ensure defencs. We are in constant contact with partners. We are grateful to those who really help with everything they can. But those who have the weapons and ammunition we need and delay their provision must know that the fate of this battle also depends on them. The fate of people who can be saved.