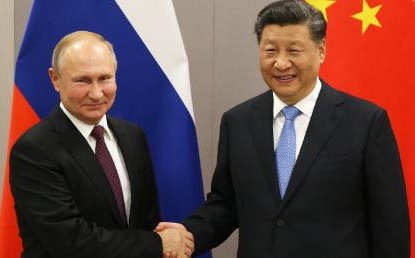 I appeared on China Radio International on Thursday in a very interesting 20-minute discussion of — and challenge to — Chinese views of the Russian invasion of Ukraine.

Listen to Discussion from 1:36

The initial topic was Wednesday’s statement by Hungary Prime Minister Viktor Orbán that, willing to host Ukraine-Russia talks, he opposes an EU ban on imports of Russian gas and will accede to Vladimir Putin’s ultimatum for payment in roubles.

Both the host and Professor Zhiguang Yin of Fudan University presented this as a sign of a fractured NATO and European Union.

Fair enough — although I explained that if this is the view of the Chinese Government, it is misguided and could lead to poor decisions. However, Professor Yin then crossed a line by saying that we should “eliminate the moral discussions” of Russia’s invasion and mass killing of civilians.

First, I hope the professor misspoke when he said we should eliminate morality and be realist, in effect, to divert our eyes from the invasion and the mass deaths of civilians. I really hope he misspoke there.

Secondly, this is not “a US point of view”. This is the point of view of a large part of the international community about what should be done in response to the invasion and to the mass killing of civilians in Bucha.

Thirdly, I hope the Chinese Government is not banking on the belief that NATO and the EU are so divided that they cannot act. NATO and the EU were slow to respond over the defense of Ukraine, but since the invasion, they have been united in that defense.

Vladimir Putin has given NATO and the EU a sense of purpose. Far from being divided, they have been renewed — not to start a new Cold War, but to make clear the invasion cannot stand.

An agitated Professor Yin tries to rework my analysis, “Professor Lucas has turned a scholarly discussion into a war cry.”

Fortunately, as I interjected over Yin’s distortion, “Don’t do that,” the host checks him: “This is a scholarly discussion.”