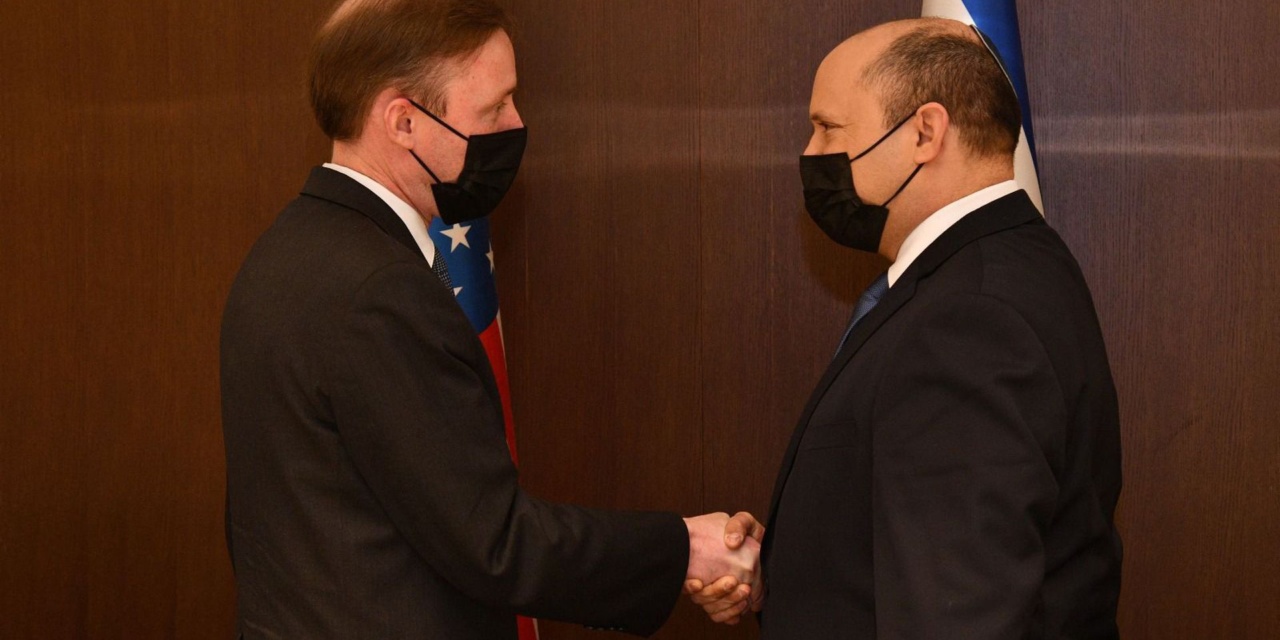 US National Security Adviser Jake Sullivan has told his Israeli counterpart Eyal Hulata that the Biden Administration is “preparing alternative options” to prevent Iran from obtaining a nuclear weapon if the Vienna talks on Tehran’s nuclear program fail.

Sullivan sent the message on Wednesday during a virtual meeting of the fourth meeting of the US-Israel Strategic Consultative Group. A White House readout of the meeting summarized:

Sullivan emphasized that while the United States remains committed to diplomacy as the best means for preventing Iran from obtaining a nuclear weapon, the United States is preparing alternative options, in coordination with its partners, should diplomacy fail.

In December, Sullivan visited Israel and indicated that the US would invoke UN “snapback” sanctions on Iran if there was no resolution in the Vienna talks over Iran’s return to compliance with the terms of the 2015 nuclear agreement. US officials indicated that this much be achieved by January 31.

As the talks have developed in Vienna — with the drafting of a text linking the return to compliance linked to US re-entry into the deal and the lifting of American sanctions — Biden Administration officials have revised the deadline to mid-February.

We’re in the ballpark of a possible deal. But again, I’m not going to put odds on this. There’s [also] a very real chance that these talks could collapse very soon.

McGurk said negotiations were nearing a “culmination point and we’re going to know very soon whether or not it is possible for the Iranians to return to compliance with the nuclear deal on terms that we and the international community can accept”.

McGurk also said that a united front among the US and the powers in the nuclear deal (UK, France, Germany, China, and Russia) had prevented the Raisi Government from setting aside progress in the talks between April and June — when its predecessor under President Hassan Rouhani was still in power.

When the Raisi team came back to talks in December, they walked in the door with [proposals]…walking back everything that had been done over the course of the summer, in the former administration of Rouhani. And we had a choice: do we just walk away from the table?”

In fact, what happened was the Iranians met a united front. The [Iranian currency] collapsed…to an all-time low. And the Iranians came back a week later with completely different proposals.

So you know, that in my view is pretty good diplomacy.

ORIGINAL ENTRY, JAN 6: US officials say they will probably decide by the end of January whether to continue the Vienna talks on Iran’s nuclear program, or to impose “snapback” sanctions on Tehran for failure to comply with the 2015 agreement.

The International Crisis Group’s Ali Vaez, who is close to the US delegation in Vienna, said Washington will “judge if there is a light at end of the tunnel, to make sure that enough progress has been made that a deal could get made at some point in February or March”.

If the determination is negative, then the US and European powers in the deal — the UK, France, and Germany — will likely invoke the UN Security Council’s snapback sanctions. The provision would mean that all UN members, and not just Washington, would reinstitute sanctions over Iran’s return to enrichment of 20% uranium, launch of a 60% uranium program, and installation of advanced centrifuges.

Vaez’s comments echo reports of talks between US National Security Advisor Jake Sullivan and Israeli officials on December 22. According to Axios, Sullivan said the snapback provisions will be used to deter any further Iranian nuclear advance, a tactic accepted by his Israeli counterparts.

Israel has told the US and European powers that Tehran is making technical preparation for enrichment of 90% uranium, which can be used in a military program. Israeli officials say that, besides the US, only the UK has shown willingness so far to reimpose sanctions.

While Sullivan discussed the snapback option, US officials told the Israelis that pressure must be balanced with diplomacy, as the Vienna talks resumed last week. The Americans also emphasized that Israeli operations, including sabotage of Iran’s nuclear facilities and assassination of its scientists, had only spurred Tehran to accelerate enrichment.

While State Department spokesman Ned Price repeated on Tuesday that there was “some modest progress”, a “Western negotiator” expressed scepticism that there will be enough by the US deadline of January 31.

Vaez said the hope is that Iran has come back to Vienna with “a more pragmatic approach, especially if they prioritize some of their demands”. A “European negotiator” said, “It is absolutely feasible with enough goodwill.”

Having taken office in August, Iran’s Raisi Government only resumed talks in November, after a five-month break. It then set aside progress in the negotiations between April and June, presenting new texts over sanctions and technical issues. In public, Iranian officials have verged on making the lifting of US sanctions a precondition for further advances.

In a joint press conference with US Secretary of State in Washington, German Foreign Minister Annalena Baerbock said Wednesday:

We are pulling in the same direction when it comes to Iran and the JCPOA [Joint Comprhensive Plan of Action].

The discussions and negotiations… are entering a crucial phase. Iran has squandered a lot of trust and there is not much time, but we intensively use this time together in Vienna.

In the aftermath of US National Security Advisor Sullivan’s visit, the head of Israeli military intelligence, Aharon Haliva, told the Security Cabinet that a return to the provisions of the 2015 nuclear deal is preferable to “total non-compliance with the agreement”.

If adopted, the position would be a marked shift from years of Israel’s “No Deal is Better Than a Bad Deal”. Haliva reported presented his assessment in a contrast to that of the head of the Israeli intelligence service Mossad, who continued to argue that Israel must insist on far tougher provisions in any agreement.