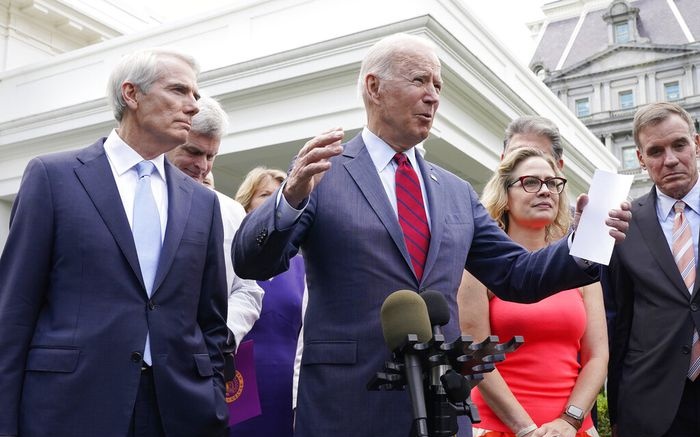 President Joe Biden and a bipartisan group of senators announce the deal on the American Jobs Plan outside the White House, June 24, 2021 (Jacquelyn Martin/AP)

The Republicans, among the 10 senators who worked on a compromise with the White House, were unsettled by Biden’s remarks on Thursday that the plan for infrastructure must be passed “in tandem” with the American Families Plan addressing poverty, health, education, and environmental issues.

Biden unlinked the two bills on Saturday, after more than 24 hours of calls by the White House — and Biden himself — to reassure the senators.

Republican Sen. Mitt Romney of Utah said on CNN on Sunday, “I do trust the President. And he made very clear in the much larger statement that came out over the weekend, carefully crafted and thought through piece by piece, that, if the infrastructure bill reaches his desk, and it comes alone, he will sign it.”

We were all blindsided by the comments the previous day, which were that…these two bills were connected. And I’m glad they’ve now been delinked and it’s very clear that we can move forward with a bipartisan bill that’s broadly popular, not just among members of Congress, but the American people.

And Sen. Bill Cassidy of Louisiana added, “I sure hope it’s enough. It’s a great deal. It is actually going to provide the infrastructure that American people want, that they need, that will make our country more prosperous for all Americans.”

Biden had said on Thursday that the eight-year bill for infrastructure must be considered in “tandem” with the bill to lift families out of poverty and provide adequate health, education, and environmental measures.

In prepared remarks in the White House East Room, he said, “I’m going to work closely with Speaker [Nancy] Pelosi and [Senate Majority] Leader [Chuck] Schumer to make sure that both move through the legislative process promptly and in tandem. Let me emphasize that — and in tandem.”

Then, during the news conference, Biden declared, If this is the only thing that comes to me, I’m not signing it. I’m not just signing the bipartisan bill and forgetting about the rest.”

Biden walked back the declaration after protests from Republican legislators, including some senators in the bipartisan group.

Susan Collins, one of the 10 senators, reacted, “We never had an inkling that there would be any kind of linkage. We always knew that there’d be another bill, but not that the success of the infrastructure package was going to be in any way dependent on the other bill.”

White House staff, and Biden himself, worked for more than 24 hours to repair any damage, calling senators from both parties.

So Biden said on Saturday that his remarks left “the impression that I was issuing a veto threat on the very plan I had just agreed to….[This was] certainly not my intent.”

The bottom line is this. I gave my word to support the infrastructure plan, and that’s what I intend to do. I intend to pursue the passage of that plan, which Democrats and Republicans agreed to on Thursday, with vigor.

ORIGINAL ENTRY, JUNE 25: President Joe Biden agree on a compromise version of the American Jobs Plan, the Administration’s initiative for infrastructure with measures for a green economy.

The agreement is for $1.2 trillion in investment, about half of the initial $2.3 trillion proposal but an increase on the Administration’s $1 trillion revision in early June.

The spending on roads, bridges, tunnels, rail, and broadband is the first major Federal initiative since the Obama Administration’s 2009 economic rescue plan. The compromise builds on existing infrastructure programs, with $579 billion in new money over eight years.

There is $312 billion for transportation projects, $65 billion for broadband, and $55 billion for water infrastructure. Included in more than $200 billion to deal with the effects of climate change is $47 billion for “resilience” and $7.5 billion for 500,000 electric vehicle charging stations.

Some key climate-related components in deal:

Maybe you count $66B in passenger/freight rail

Certainly not enough for climate experts, but not nothing

Funding will come in part from a $40 billion increase in the Internal Revenue Service’s enforcement budget to collect $140 billion in unpaid taxes, and from the repurposing of unspent Coronavirus relief money. The Administration had initially proposed a rise in corporate taxes, reversing some of the sharp from 35% to 21% in December 2017.

The package follows the $1.9 trillion American Rescue Plan, adopted in early March, to deal with the Coronavirus pandemic and its economic effects. The Administration has also proposed a $2 trillion American Families Plan to deal further with economic and social deprivation, seeking to raise more than half of American children out of poverty.

Biden said from the White House’s East Room, “This agreement signals to the world that we can function, deliver and do significant things.”

Both Jobs and Families Plans?

Senate Republicans blocked the original plan, and gave little ground in talks with Biden. A bipartisan group of 10 senators then worked on their own draft, and presented it to the White House for negotiation.

Biden and leading Democratic legislators said the compromise must be accompanied by the American Families Plan, with the expenditure on health care, child care, access to higher education access, and climate change programs. Funding would come from revision of the tax code to increase revenues from large and multi-national corporations that shift profits and jobs overseas.

Biden emphasized yesterday, “If this is the only thing that comes to me, I’m not signing it.”

The ambition is to pass all the legislation this autumn. To succeed, the infrastructure compromise must obtain 60 votes, in a 50-50 Senate, to defeat a Republican filibuster blocking any advance. Then the American Families Plan must pass through “budget reconciliation”, a process which can bypass the filibuster on a simple majority.

Democratic Sen. Kyrsten Sinema of Arizona, one of the senators who developed the alternative draft, said, “I think that this coalition, and now being endorsed by the President, sends a message not just to Congress, not just to the country, but to the world that we can do the big things — we can function.”

Republican Sen. Mitt Romney of Utah echoed, “America works, the Senate works, and we can work together.”

But Senate Minority Leader Mitch McConnell pledged to continue his obstruction. He said of Biden’s intention to pass both the American Jobs Plan and American Families Plan: “Really? Caving completely in less than two hours? That’s not the way to show you’re serious about getting a bipartisan outcome.”

Some centrist Republicans also held out against pairing the plans for adoption.

“There’s no need for that,” Sen. Susan Collins of Maine — one of the bipartisan group of 10 senators — said. “It seems to me that we should get this done.”

Some progressive Democrats in the House said they would not support the pursuit of the American Jobs Plan, without the accompanying American Families Plan. Rep. Alexandria Ocasio-Cortez of New York explained, “It’s not worth it for us as a country, let alone a party, to pass a very narrow infrastructure bill that doesn’t benefit as many people as it should benefit. And I think that we’ve won that case.”