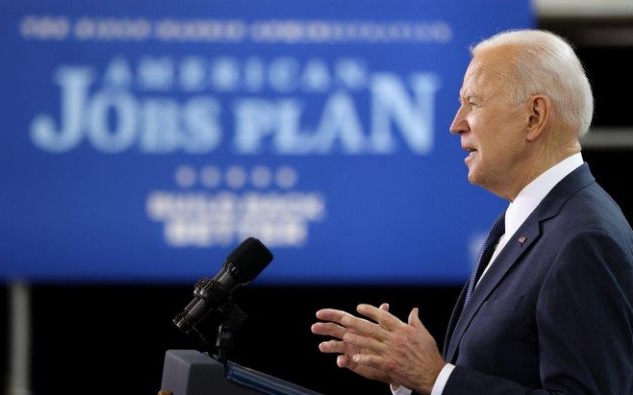 President Biden has rejected a Republican counter-offer on the American Jobs Plan, adding only $50 billion to their initial offer of about $200 billion.

Biden met with Sen. Shelley Moore Capito, the leader of the GOP negotiating team, on Friday. Talks will resume on Monday.

The GOP offer is still far short of Biden’s revised proposal of $1 trillion, reduced from his initial proposal of $2.3 trillion for infrastructure and economic development linked to measures against climate change.

Biden has reduced expenditure to $1 trillion from $2.3 trillion. He has halted a plan to reverse some of the massive tax cuts from December 2017, including his proposal to raise the corporate income tax rate to 28%.

The package will largely be financed by imposing a new minimum federal income tax on large companies such as Amazon, cracking down on tax evasion by corporations and the rich, and closing some business tax loopholes.

But leading Republicans are continuing to hold out against the plan to repair intrastructure, foster job growth, and link economic development to efforts against climate change.

GOP legislators have added less than $100 billion to their initial offer of about $200 billion in new spending.

I don’t think that’s going to appeal to members of my party, and I think it’ll be a hard sell to the Democrats. Let’s reach an agreement on infrastructure that’s smaller but still significant and fully paid for.

Sen. Capito is scheduled to meet Biden again on Friday.

Some Democrats are urging the Administration to abandon the effort at bipartisan support. Instead, “budget reconciliation” would be used for Congressional passage. That process would circumvent the 60 votes needed to end a Republican filibuster preventing any final consideration of the Plan.

Rep. Jamaal Bowman of New York said in a statement, “No Republican vote in favor of an infrastructure package should supersede our mission: to build an America that works for the people, not for massive corporations. Getting Republicans on board is not necessary. Getting the American people back on their feet is.”

However, in a 50-50 Senate, Democratic Sens. Joe Manchin of West Virginia and Kyrsten Sinema of Arizona continue to oppose any resort to budget reconciliation.

Business lobbyists are urging Republicans to accept more spending, such as programs for low-carbon energy deployment. They are promoting finance through increased gas taxes and federal borrowing, rather than any rise in business and corporate taxes.