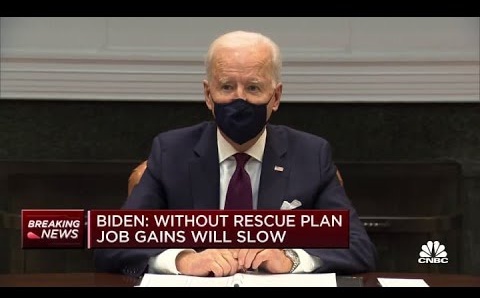 The Biden Administration pushes the $1.9 trillion American Rescue Plan as the Senate debates passage of the measures over Coronavirus and the economy.

Biden and his officials emphasized Friday that there is still a long way to go after more than a year of downturn.

The jobs report confirmed a stronger-than-expected bounceback in February. The increase of 379,000 employed was the largest since October.

However, there are about 9.5 million fewer jobs than a year ago. Jones emphasized that for those still unemployed, “It really matters what we do in the next two weeks.”

Despite issues over supply, there were 2 million Coronavirus vaccinations in a day this week. The Administration is far ahead of its initial target of 100 million inoculations in 100 days, with Biden pledging that all American adults will be covered by the end of May.

Changes in Plan to Ensure Passage

To ensure passage of the Plan, Senate Democrats adjusted its provision for unemployment payments.

The Federal benefit will remain at $300 per week, rather than increasing to $400, and lasts until September 6 rather than early October. However, much of last year’s benefits will now be tax-free.

With the Senate split 50-50 and almost all Republicans devoted to blocking the Plan, the adjustment was made to meet the request of Democratic Sen. Joe Manchin of West Virginia and colleagues who expressed concern that too high a benefit would deter people from returning to work.

An earlier amendment lowered the income threshold for those who can receive one-off $1,400 payments. The proposal for a $15/hour minimum wage by 2025 for Federal workers has been removed, with the Administration saying it will be pursued in separate legislation.

“The President supports the compromise agreement, and is grateful to all the senators who worked so hard to reach this outcome,” White House Press Secretary Jen Psaki said.

The Plan may now pass, with Vice President Kamala Harris as the deciding vote, this weekend.

“The Senate is going to take a lot of votes, but we are going to power through and finish this bill, however long it takes,” said Senate Democratic Leader Chuck Schumer.

Manchin said after the altered measure, which passed at 1:30 a.m. Saturday, “We have reached a compromise that enables the economy to rebound quickly while also protecting those receiving unemployment benefits from being hit with an unexpected tax bill next year.”

The Plan also provides funding for vaccine distribution and schools, relief for small businesses, and support such as food assistance for families affected by the pandemic.