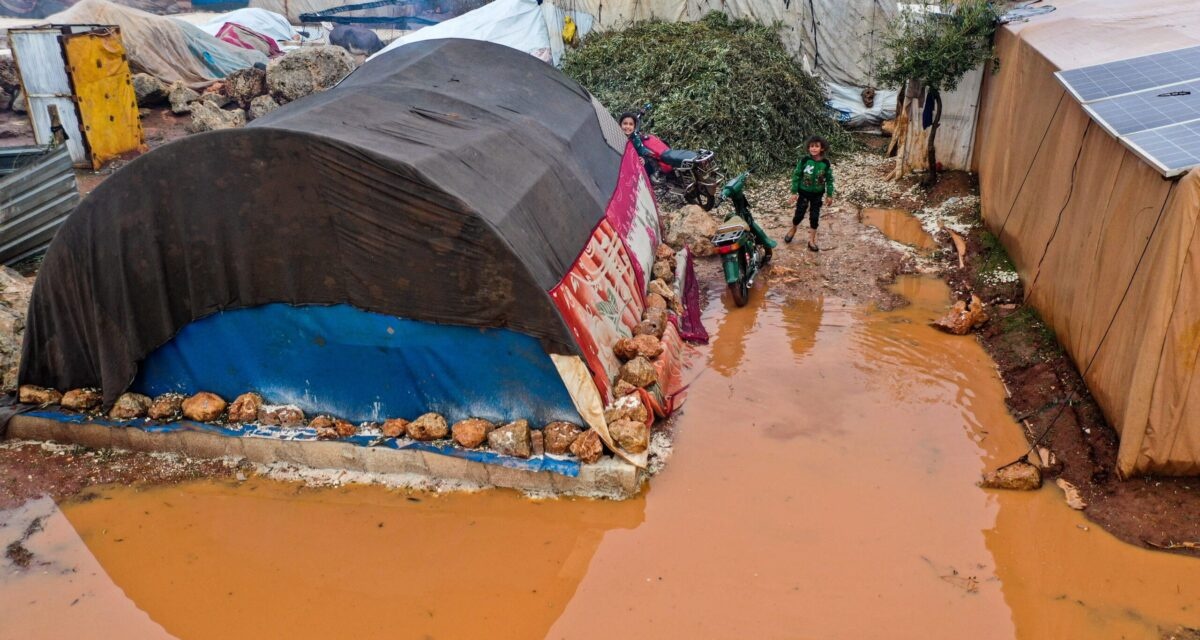 A child stands next to a moped outside a tent at a flooded camp near the village of Kafr Uruq, Idlib Province, northwest Syria, January 17, 2021 (Omar Haj Kadour/AFP/Getty)

A video from one of the flooded camps for displaced civilians in northwest Syria:

I make this video to show u the bad bab situation in camps ' Imagine your children are livinig in this bad situation. Complained to Allah😢😢😢 pic.twitter.com/bVhut4Wfwb

The White Helmets civil defense reports that 36 camps were damaged by torrential rains and strong winds on Saturday. More than 150 tents were destroyed and more than 350 partially damaged, affecting about 450 families.

More than 22,000 displaced Syrians have lost their temporary homes because of flooding from heavy rains and snow in northwest Syria.

CARE International reports that the harsh weather has destroyed more than 4,000 tents. The agency confirms the death of one child, killed by a collapsing wall, and injuries of three other civilians.

In northern Idlib and western Aleppo Provinces, 87 sites have been flooded. The displaced have sought shelter with family members, in public buildings, or out in the open, amid below-zero )32 degree Fahrenheit) temperatures.

CARE is appealing for supplies such as plastic sheets, blankets, mattresses, floor mats, kitchen sets, and baby packages. The agency calls more widely for “additional funding that allows for infrastructure rehabilitation, as well as for more sustainable shelter solutions in locations that are safe”. It notes the latest displacements come on top of the Coronavirus pandemic threatening the area.

A large storm has swept through Idlib Province and northern Aleppo Province, where an estimated three million displaced live. Almost 150 camps and several roads have been damaged, according to humanitarian workers. They said 278 tents have been destroyed, and 513 partially damaged in areas around Idlib city and along the Turkish border in northern Aleppo.

A child was killed on Monday night when a wall collapsed in a temporary shelter.

🛑 We have no new words that can describe the bad conditions in these camps@HadiAlabdallah: ''We need to work on returning these people to their homes and towns.''https://t.co/6TwmiQr6yh pic.twitter.com/aTW4LNqo2D

Anas Jomaa, the director of the Thanawiya camp in Harbanush, north of Idlib city, told Middle East Eye, “The rain has not stopped for several days, and we have been suffering from water pooling between tents. We have transported women and children outside the camp out of fear of more flooding.”

Ahmed al-Khalif said more than 500 families have been surrounded in the Umm al-Jurn border camp, with the main road cut off since Saturday: “When rain falls, we become besieged, and the camp turns into an isolated island, where we cannot even secure drinking water.”

The greater Idlib area is the last major opposition territory in Syria after 118 months of conflict. Russia and the Assad regime seized part of Idlib Province and almost all of neighboring northern Hama in an offensive between April 2019 and March 2020. About 2,000 civilians were killed, thousands were injured, and an estimated 1.4 million were displaced.

Aerial video, which is not just tents flooded with rainwater, under each tent is a story of a human being displaced and painful that words cannot describe. Video from camps in northern Syria pic.twitter.com/HwIqnsp7i8