Triumphing Over the UK’s “Culture Wars” 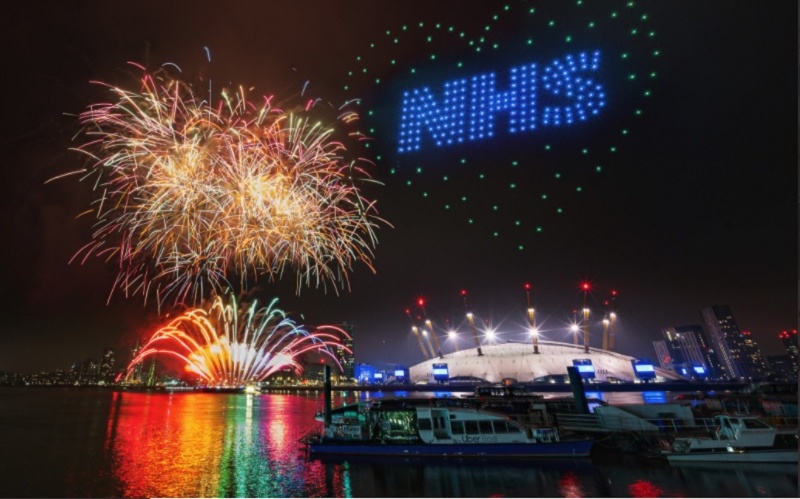 London’s fireworks display, including a tribute to the National Health Service, January 1, 2021

Across the world, people are hoping for a better 2021. Some of us lost loved ones in the Coronavirus pandemic; all of us had lives put on hold. Our health services are under strain, as we wonder what the “new normal” will be.

In the UK, that new normal includes a position outside the European Union after almost a half-century. And from the US across the globe, the killing of George Floyd sparked the “Black Lives Matter” campaign to address racial, economic, and social inequalities.

On New Year’s Eve, in a fireworks display, London Mayor Sadiq Khan decided to honor the National Health Service with a heart, support Black Lives Matter campaign with the Black Power salute, thanked the EU, and paid tribute to Captain Tom Moore, the 100-year-old who raised £39 million for charity by walking laps of his garden. A voiceover by David Attenborough followed, calling for action to save the planet.

A true national hero. When we all needed a lift during the first lockdown @CaptainTomMoore was there to show us that anything is possible.

Some said it was a fitting, socially-distanced end to the year. Others had a far different commentary.

The Daily Mail seethed, “Revealed: Taxpayers paid £1.5 MILLION for Sadiq Khan’s ‘woke’ NYE light show – featuring BLM fist salutes and NHS tributes – after he masterminded the event and worked with BBC and Met Police to keep it a secret.” The Spectator was also outraged: “Why did Sadiq Khan politicise London’s fireworks?” I

A spokesman for Mayor Khan took the far-from-unexpected pushback in strike: “[The display] reflected some of the defining moments of what has been a very challenging year for our city and country, including the significant impact of Black Lives Matter, Captain Tom’s incredible fundraising efforts, and our appreciation for the NHS.”

The significance of the episode is not of jabs in headline and on Twitter. The mantra of “culture wars”, deployed for decades by the right-wing press for readers and for influence, now has a sharper political resonance. The victors of Brexit, having taken Britain out of the Europe, will now try to expel “woke culture”. Liz Truss, the Minister for Women and Equalities, is using the pretext of a focus on class and individual “character” to toss out the quest for equality. As she and the Government frame the issue, discrimination should not focus on race, religion, sexual orientation, or disability.

As the deadly Coronavirus cost of poor Government planning escalates and the UK economy reels from a combination of Brexit and the pandemic, expect more of this. Targeting the “wokeness” of Sadiq Khan, Black Lives Matter, and the “lefty” remnants of the BBC will be the diversionary sanctuary for Ministers. An economy going south will be obscured by a bit of political correctness going mad. Long-term social and economic disparities will be suppressed with faux outrage about statues and Stately Homes jeopardized by protests. At the end of the year, trumped-up stories of replacing the term Christmas with Winterval may be on our airways once again.

Prime Minister Boris Johnson is no novice in the wars — he has earned his spurs with headline-grabbing derogations of people’s religion or race. And even as his “glorious Britain” rhetoric falls flat, he will have no shortage of opportunities for distractions. Already Kelvin MacKenzie, the former editor of the Sun, has linked Brexit triumph to the shout for a “referendum on the death penalty”.

So “Europe” is replaced as the enemy: not only by the “Remainers” who have been vanquished but also by the BBC, the universities, equality supporters, Scottish and Welsh nationalists, the Labour Party, food banks, refugees, the legal system, the cities, and anyone carrying a whiff of “liberal”. Culture wars will try to mobilise conservative Britons over identity, “patriotism” and society as those Britons, like all of us, suffer the Brexit fallout.

How to deal with this?

Peddlers of the “culture war” narrative use it to create an “Us v. Them” society. Ignoring them will not blunt their damage from the despatch box, the tabloid headline, or the on-air soundbite.

Instead, that “culture war” has to be engaged and converted, using a smile and a bit of good humor. Sadiq Khan responded to the tabloid distortion of the fireworks display.

Anyone else think it was pretty good? 🤔 pic.twitter.com/dAbfSmtvme

Spot on. The display was not celebrating Us v. Them but inclusion: the inclusion of a National Health Service with its diverse staff from many backgrounds and nationalities, a Black Lives Matter movement combatting racism and pursuing rights and justice for all, and a post-Brexit cooperation rather than confrontation with the European Union.

The fireworks were a light show that we can work together and not apart in this quest. They were a beacon for respect and preservation of nature, so future generations can inherit a world which is safe, secure, and sound.

Anyone else think that’s pretty good?