“America Is Back”: The Risky Illusion of the “Normal” 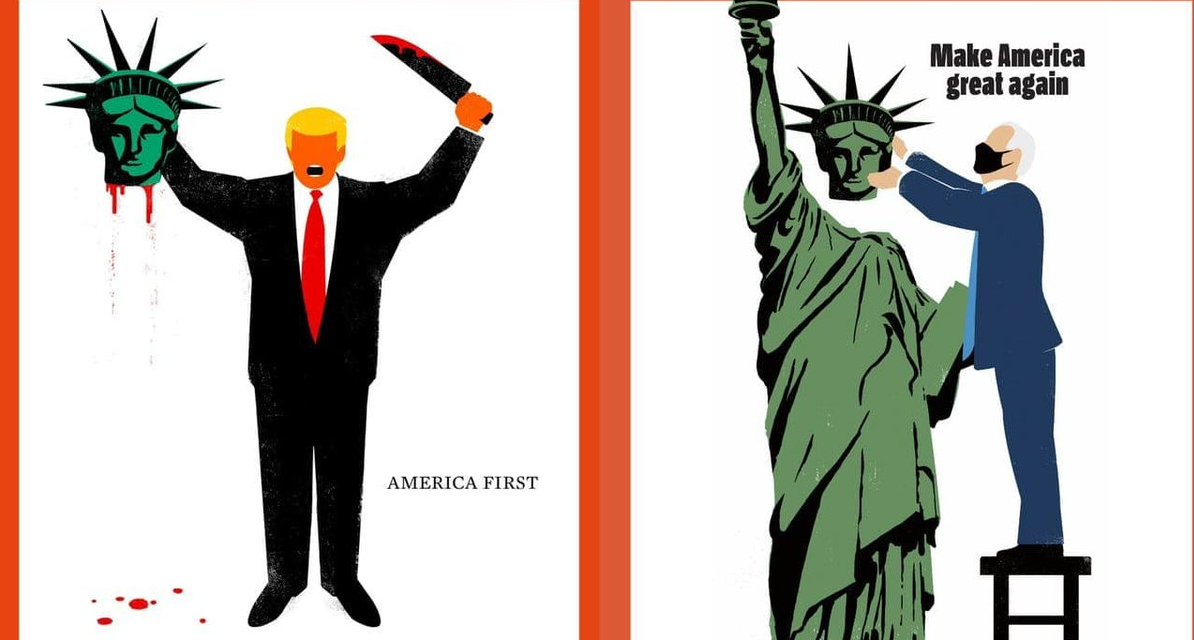 Written for The Conversation:

The election of Joe Biden as the 46th president of the United States was received across much of the world with a mixture of relief and exuberance, though often laced with apprehension. A common theme in news headlines and Twitter feeds was that normal service was being resumed in the US and in international affairs.

Welcome back America! Congratulations to @JoeBiden and @KamalaHarris for their election! While we are about to celebrate the 5th anniversary of the Paris Agreement, this victory symbolizes our need to act together more than ever, in view of climate emergency. 🇺🇸#Election2020

In Germany, the cover of the news magazine Der Spiegel depicted Biden putting the severed head of the Statue of Liberty back on the torso (referencing an infamous cover from 2017 that depicted Trump severing the head). The image is accompanied with the ironic text “Make America Great Again”.

The theme of an American restoration was repeated in news and social media across the world. The symbolism is strong, but it is less clear what is being restored. In this it echoes the “return to normalcy” theme in Biden’s election campaign in the US, a nostalgic nostrum that vaguely promises a reset of American principles and policies.

What is at issue in these desires to go back to a pre-Trump America?

The False Relief After Trump

In the US, the desire for normalcy surrounding the election of Biden reflects an existential anxiety – that Trump ignited a devastating attack on liberal democracy that may prove epochal.

The contradictions and tensions in American liberal democracy have been forcefully revealed with his presidency, which took advantage of the gap between declared liberal values and political reality. Trump not only exploited that gap, he spoke to latent desires and emboldened expressions of identity in both politics and people that had long been marginalised or silenced.

With Trump’s ousting, the liberal desire for a return to normality has been amped up via the figure of Joe Biden. It was clearly articulated by the new President at his inauguration, in his pleas for national unity and his promise to end the “uncivil war” in the US. David Sanger, in the New York Times, noted, “Mr Biden’s inauguration was notable for its normalcy, the sense of relief that permeated the capital over an era of constant turmoil and falsehood ending.”

But there was little that was normal in the scene of a scaled-down inauguration taking place with only a handful of socially distant, masked participants and surrounded by the militarised landscape of a post-riot Capitol. The image was not of national healing but of a national emergency.

Accompanying the desire for normalcy and sense of relief is the implication that the “Trump era” was an aberration, a temporary deviation in the natural political order of things.

This is an attractive and tempting palliative for those who resisted Trump’s spell and disavow the significance of his political rise and appeal to millions of Americans. In this view, Trump was “the cat in the hat” – an unwelcome visitor and unruly avatar of instincts for disorder, evicted once the parents return. Enter Joe Biden and Kamala Harris.

But Trump (and Trumpism) was and is something more than a temporary eruption in the order of things or mere symptom of a malaise in American public life. Trump unleashed the libidinal forces of “illiberal democracy”, undermining America’s commitment to constitutionalism, the rule of law and individual rights. He supported these forces in the US and encouraged them elsewhere, transforming the landscapes of American political culture and foreign affairs in ways we are still trying to understand.

Americans pay little heed to external perspectives on their country and by and large do not respond well to critical views of it or of their leaders. That may be viewed as stubbornly patriotic, but it is more fundamentally due to a deep-seated ignorance founded on a myth of national exceptionalism, a myopia that is quintessentially American.

Trump’s presidency should remind Americans of the fragility of the social and political order that so many take for granted. Is it not a little shocking that Americans should need to be reminded of this? Perhaps not, perhaps the amnesia is a component of the American worldview, which commonly displaces the most serious challenges to democracy on to others elsewhere.

As the American writer Tom Wolfe once quipped, the “dark night of fascism is always descending in the United States and yet lands only in Europe.” Of course, “it can’t happen here”.

Might it be that the importance of Trump’s election and presidency has been better or at least more readily understood in other countries where there is a living memory of the pains of populist authoritarianism, where people are more familiar with how reality can be dismantled?

The Slovenian-American writer Aleksandar Hemon suggests as much when, in the wake of Trump’s election, he commented:

In America, a comfortable entitlement blunts and deactivates imagination – it is hard to imagine that this American life is not the only life possible, that there could be any reason to undo it.

Hemon filters his perspective through his experiences and insights from living in Sarajevo during the Bosnian war “through a time when what cannot possibly happen begins to happen, rapidly and everywhere”. Observing the disorienting impact of the early days of Trump’s Presidency, he wryly notes, “‘Reality’ has finally earned its quotation marks.”

Reality did indeed earn its quotation marks in “Trump’s America”, a fantasy world in which Trump supporters imaginatively and emotionally invest. It’s a world in which conspiracy theory and social media combine to create an alternative reality, a world that is self-contained and self-reinforcing – and impervious to facts.

Galvanized by Trump’s near messianic leadership, the fantasy has become pervasive and is deeply embedded in the imaginations – the fears and desires – of millions of Americans. It cannot simply or swiftly be undone.

“America is back, ready to lead the world, not retreat from it,” Biden stated in November as he introduced his foreign policy team. The “America is back” refrain has been repeated ad nauseum by Biden’s surrogates in the past few months.

What it means in terms of policy remains unclear. Symbolically, it is declared as a rebuttal of Trumpist foreign policy, infamously sloganed as “America First”, suggesting a renewed era of US global engagement and leadership.

But the meaning remains open and opaque and, as Julian Borger observes in The Guardian: “How a slogan as all-encompassing as ‘America is Back’ is received around the world will inevitably be a Rorschach test for what is perceived to be the ‘real America’ that has been absent in the past four years.”

The perception of what constitutes the “real America” is both a domestic and foreign policy dilemma for the US. Assumptions about liberal democracy at home and about a liberal world order abroad are no longer acts of faith.

As we head into a “post-American world”, global enthusiasm for democracy cannot be assumed, nor can the ability of the US to set an example, for that has been undone by the spectacles of civil unrest and the disastrous handling of the coronavirus pandemic. The domestic “uncivil war” will, as political scientist Francis Fukuyama warns, have “consequences for global democracy in the coming years”.

Biden’s foreign policy team are talking up democratic solidarity between states as the basis for a new internationalism but this cannot be a restoration of liberal hegemony. It must reckon not only with the damage done by the starkly nationalist “America First” doctrine: it must also acknowledge the failings of liberal internationalism before Trump became President. After all, neoliberal globalisation gave rise to the political and cultural blowback called Trumpism in the US and its ethnonationalist cousins across the world.

Making a fetish of normalcy is a form of American exceptionalism. “America Is Back” may prove as myopic and delusional as “Make America Great Again”.