EA on Monocle 24: Trump, Pardons, and His Latest “Clown Show” 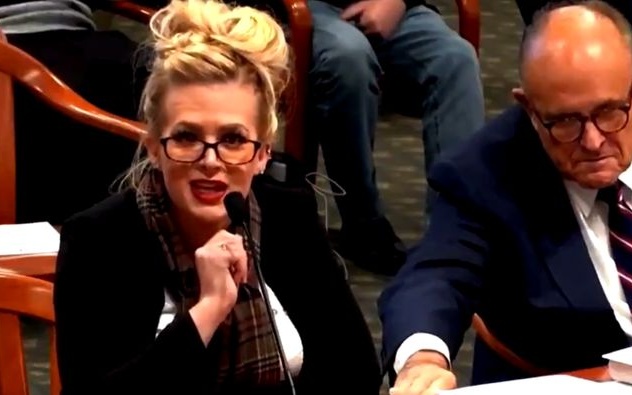 Trump attorney Rudy Giuliani tries to halt “witness” Mellissa Carone as she speaks at a hearing held by Republican legislators in Michigan, December 2, 2020

I joined Monocle 24’s Georgina Godwin on Thursday morning to discuss the turmoil around the final days of the Trump Administration, from Donald Trump’s pardons to his camp’s “clown show” trying to discredit the November 3 elections.

Listen to Discussion from 17:13

I begin by putting aside the headline-grabbing but sketchy report of bribery-for-pardons to deal with the substantial story of Trump — protecting himself in the Trump-Russia and Trump-Ukraine affairs and possibly in future prosecutions — handing out commutations and pardons to associates like Roger Stone and Michael Flynn, and considering “pre-emptive pardons” for his children and attorney Rudy Giuliani.

There’s a look at Trump’s 46-minute disinformation video on social media. Then I review the latest “clown show” to undermine President-elect Joe Biden’s victory, this time before Republican legislators in Michigan —an event including a possibly-drunk witness, rambling and ranting as Trump attorney Rudy Giuliani tried to silence her.

We mention the claim of Roger Stone, the “dirty trickster” saved from prison by Trump, claiming that North Korea smuggled fake ballots for Biden into New York.

Is this dangerous as well as darkly humorous?

While we’re seeing the American system work, while we’re seeing the Biden transition team get ready to take power and deal with Coronavirus, we are also the ongoing throwing not only of mud but of the lowest kinds of dirt against the walls — disinformation, lies, deceptions — by the Trump camp.

We do not know how much corrosive effect Donald Trump and his allies will have, even if they leave office.