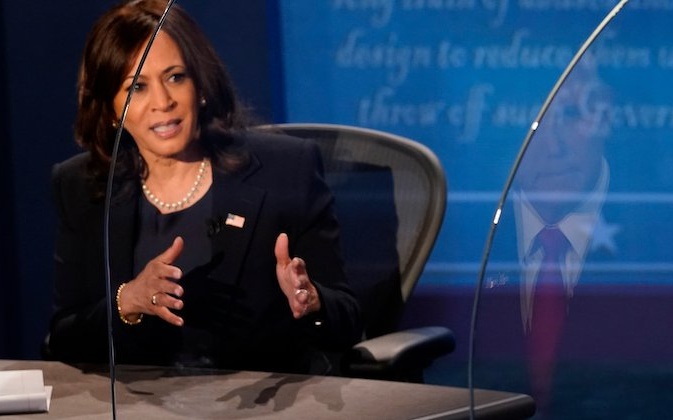 The management — or mismanagement — of the Coronavirus pandemic is the central issue in the Vice Presidential debate between Mike Pence and Democratic candidate Kamala Harris.

Answering the first question in the 90-minute encounter, Harris framed the discussion:

The American people have witnessed what is the greatest failure of any Presidential administration in the history of our country….

She drove home the point, “They knew, and they covered it up. The President said it was a hoax. They minimized the seriousness of it.”

With almost 212,000 Americans killed and more than 7.5 million cases, Pence struggled to show any effective Administration response. He misrepresented the extent of the restriction on travel from China, falsely claimed that a vaccine will soon be widely available, and avoided — with at least 15 White House and GOP figures testing positive in the past six days — a question about the White House’s “super-spreader” event on September 26 for Supreme Court nominee Amy Coney Barrett.

Seeking some support for his claim, “From the very first day, President Donald Trump has put the health of America first”, Pence unwittingly indicated that Trump only supported Coronavirus restrictions in mid-March when he was warned by the Government’s medical experts that 2.2 million Americans would be killed if no action was killed.

Within days, Trump reversed his brief support and demanded a full “re-opening” of the US by Easter, April 12. His insistence led to Republican Governors removing measures, soon followed by a deadly surge in cases.

Harris summarized, in response to Pence’s attempt to absolve the Administration:

Whatever the vice president is claiming the administration has done, clearly, it hasn’t worked when you’re looking at over 210,000 dead bodies in our country, American lives that have been lost, families that are grieving that loss.

The debate, following on Donald Trump’s infection and hospitalization with the virus, effectively buried the Trump-Pence campaign’s tactic to push the pandemic to the side in the last month of the campaign.

While there were a question on their preferred ground, the nomination of Barrett for the Supreme Court, the answers made little impression.

Pence could not advance Trump’s effort to push a culture war v. “extremists” and “anarchists”. Instead, Harris drove home the message of the need for racial and social justice amid mass marches across the US since the killing of George Floyd by a police officer on May 25.

That injunction was largely heeded. Pence tried to disrupt Harris with interruptions but she immediately rebuffed him, “Mr. Vice President, I’m speaking.”

.@KamalaHarris is every woman in the workplace. pic.twitter.com/aYv6ZBttVJ

When Pence did make an interjection about taxes and fracking, Harris put down his representation of Democratic plans, “That is absolutely not true,” setting out the campaign’s actual positions.

She then moved to the protection of healthcare:

Pence was largely able to skirt questions about the Administration’s responsibilities over economic downturn and climate change with claims, sometimes unsupported, about the Trump-Harris platform.

However, he ran into trouble at the end of the debate over the question of what he would do if Donald Trump defies the outcome of the November 3 ballot.

Pence evaded the topic with the declaration, “I think we’re going to win this election”, and the swift diversion to a prepared remark claiming success with the economy and courts filled with conservative judges.

He continued with falsehoods to plead that it was Donald Trump who is the victim of the electoral process, “Senator, your party has spent the last three and a half years trying to overturn the results of the last election….When Joe Biden was vice president of the United States, the FBI actually spied on president Trump and my campaign.”

Far from standing against Trump’s threat, Pence closed by supporting it with the lie about fraudulent mail-in voting, and pledging to take judicial action to prevent an unwelcome outcome.

President Trump and I are fighting every day in courthouses to prevent Joe Biden and Kamala Harris from changing the rules and creating this universal mail in voting that’ll create a massive opportunity for voter fraud.