UK: Why Priti Whipped Up A Culture War Against Refugees 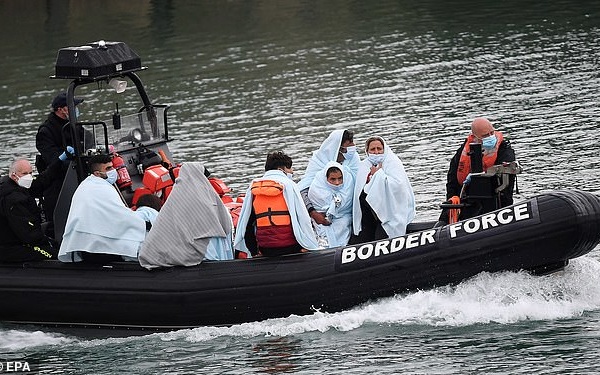 Refugees, crossing the English Channel, picked up by the UK Border Force

If patriotism is the last refuge of scoundrels, then creation of a culture war is the last bastion of political desperation.

Last week UK Home Secretary Priti Patel, the daughter of migrants, traveled to Dover, claiming she would sort out “appalling” and “shameful” refugees arriving in the UK on small dinghy boats. Yet her rhetoric did nothing for those fleeing war and deprivation — it was to show she was not on the right of anti-immigrant demagogues like Nigel Farage, once the leader of the UK Independence Party, but also on the right side of politics amongst her Conservative compatriots.

Contrary to shameful, breathless live coverage from Sky and BBC reporters following dinghy boats as frightened families try to bail out water, the UK is not facing a “migrant invasion”, any more than it faced an invasion of its men fleeing German attacks in 1940. Farage may have baited the hook for the media by proclaiming his refugee watch as he sat in his shorts on the cliffs of Dover, but there are far from unmanageable numbers.

The refugee crisis elsewhere. If Farage and Patel were serious about dealing with the issue, they would be in Turkey, Lebanon, Jordan, and Iraq who are hosting millions of refugees from the Syrian conflict. They would be in Bangladesh noticing the hundreds of thousands of Rohingya expelled from Myanmar. Or they could venture to Uganda with more than a million displaced, most from South Sudan, the Democratic Republic of Congo, Burundi, and Somalia.

In Europe, countries such as Greece, Italy, and Germany have taken the large majority of refugees. The UK has not welcomed any since March. So why Priti’s posture?

Start with Farage, desperate for attention after he left UKIP and his Brexit Party collapsed last year. Apparently shut out by the Coronavirus pandemic, he whipped up a new one-man spectacle — Nigel v. the enemy of scared, hungry, and unprotected men, women, and children. His video of eight migrants who made it to the UK shore constituted a national emergency. He hijacked V-E Day on May 8:

On a day of national celebration we are being humiliated on the South Coast. As I have predicted, a record number of illegal immigrants have been taken into Dover. All along the coast there are many more. This is the beginning of an invasion.

Four years after his pose in front of the notorious “Breaking Point” billboard, with a group of Syrian refugees in Turkey turned into a mortal menace, Farage had revived his egotistical quest, tapping into fear of the dark-skinned, mainly Muslim refugees. Once again, he turned them into aggressors who could steal, rape, or claim universal credit at our expense.

Patel, never short of political ambition, saw both challenge and opportunity. Farage on the front pages could shred her paper armor of fortitude. At the same time, she could capitalize on the opening to grab a photo-opportunity sword — and the Government could launch an attack diverting from the real threat of Coronavirus and deep recession.

There was pushback. Gary Lineker — pride of English football, TV presenter, social media commentator — asked, “How could you not have empathy for people living this nightmare?” But that widen the target of opportunity for Patel and the Government: Lineker was accused of “virtue signalling”. Radio journalist James O’Brien and ice cream’s Ben and Jerry became punching bag when they called for compassion and rationality.

The Home Secretary could count on Spiked Online, the Daily Telegraph, the Spectator, and talkRADIO to howl derision both at the migrants and at the “woke” analysts and activists seeking common sense. Patel dangled the notion of a Clandestine Channel Threat Commander to put more fuel on a histrionic blaze.

Nigel, Priti, Prime Minister Boris, and their outlets count on the hideous spectacle — poor refugee who might drown becomes threatening refugee once he or she crosses into British waters — to take our gaze from reality.

The UK is home to much less than 1% of the world’s 79.5 million refugees and forcibly displaced persons. Asylum seekers make up a small percentage of migrants, most of whom are studying or working in this country: there were only 35,099 asylum applications in the year ending March 2020, significantly lower than the peak of 84,000 applications in 2002.

About 85% of refugees live in a country bordering their own. Turkey, Pakistan, Uganda, and Sudan hosted the highest numbers of refugees at the end of 2018. In the last four months of 2019, Spain, France, Germany and Greece received 74% of asylum applications in Europe.

And these are not “illegal” migrants. The posturing of Patel and Farage cannot take away their legal right to claim asylum, guaranteed under the 1951 Refugee Convention, until they fail to make an application.

But who are you to believe your eyes, ears, and brain? Are you just being “woke”?

.@PritiPatel was in Dover today seeing first-hand how Border Force officers are intercepting small boats in the Channel.

We are committed to tackling this issue and working with the French government to make this route completely unviable. pic.twitter.com/Iycs2d8g5M