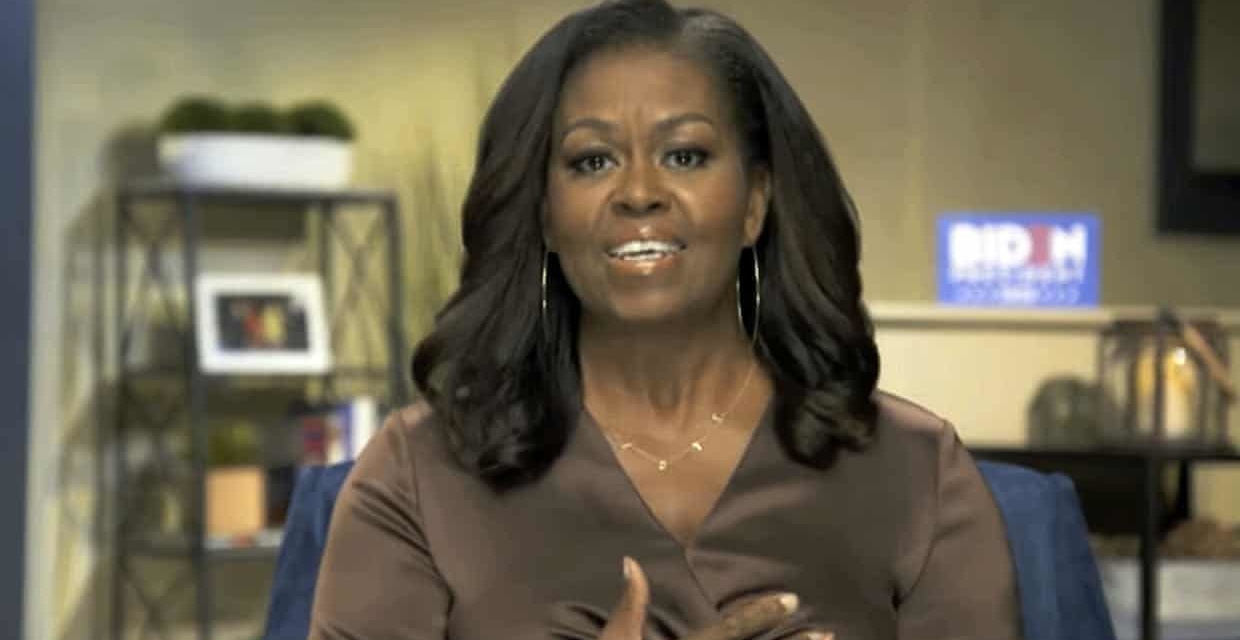 On the first night of the Democratic National Convention, Michelle Obama tells a virtual audience, “Going high is the only thing that works”, while enjoining them to stand firmly against hatred, chaos, and division — including that of Donald Trump.

In October 2016, Obama issued the call in a New Hampshire, “When they go low, we go high.” Trump’s subsequent victory over Hillary Clinton raised doubts for some whether the path of decency works against the tactics of disinformation and incitement.

Going high is the only thing that works, because when we go low, when we use those same tactics of degrading and dehumanizing others, we just become part of the ugly noise that’s drowning out everything else. We degrade ourselves. We degrade the very causes for which we fight.

But let’s be clear: going high does not mean putting on a smile and saying nice things when confronted by viciousness and cruelty. Going high means taking the harder path. It means scraping and clawing our way to that mountain top. Going high means standing fierce against hatred while remembering that we are one nation under God, and if we want to survive, we’ve got to find a way to live together and work together across our differences.

And going high means unlocking the shackles of lies and mistrust with the only thing that can truly set us free: the cold hard truth.

In that spirit, Obama set out the scale and stakes of the challenge, “Donald Trump is the wrong president for our country.”

She continued, “If you think things cannot possibly get worse, trust me, they can; and they will if we don’t make a change in this election. If we have any hope of ending this chaos, we have got to vote for Joe Biden like our lives depend on it.”

Obama dissected the Trump Administration’s damaging achievements with “more than 150,000 people” dead and “our economy in shambles” with “millions of people jobless…because of a virus that this President downplayed for too long”. She noted that many people have been stripped of health care and “too many are struggling to take care of basic necessities like food and rent”. Beyond the US, “we’ve turned our back, not just on agreements…but on alliances”, established by Republican and Democratic Presidents.

She highlighted anti-racism marches: “As George Floyd, Breonna Taylor, and a never-ending list of innocent people of color continue to be murdered, stating the simple fact that a Black life matters is still met with derision from the nation’s highest office.”

Whenever we look to this White House for some leadership or consolation or any semblance of steadiness, what we get instead is chaos, division, and a total and utter lack of empathy….

He is clearly in over his head. He cannot meet this moment. He simply cannot be who we need him to be for us. It is what it is.

It is up to us to add our voices and our votes to the course of history, echoing heroes like John Lewis who said, “When you see something that is not right, you must say something. You must do something.” That is the truest form of empathy: not just feeling, but doing; not just for ourselves or our kids, but for everyone, for all our kids.

In a show of unity behind Biden and his Vice Presidential running mate Kamala Harris, Sen. Bernie Sanders called for a dedicated effort to win the White House.

Sanders, who finished second to Biden in the Democratic primaries and carried the “progressive” banner, told the audience: “Many of the ideas we fought for that just a few years ago were considered radical are now mainstream.”

He echoed Obama’s call for a decent, vibrant challenge at a historic moment:

Let us be clear. If Donald Trump is re-elected, all the progress we have made will be in jeopardy.

At its most basic, this election is about preserving our democracy.

While noting that he and Biden had disagreed over some issues, he addressed supporters,
“Together we must build a nation that is more equitable, more compassionate and more inclusive. I know that Joe Biden will begin that fight on Day 1….The price of failure is just too great to imagine.”