One Year After That Trump Call, Ukraine’s Zelensky Struggles in Anti-Corruption Fight 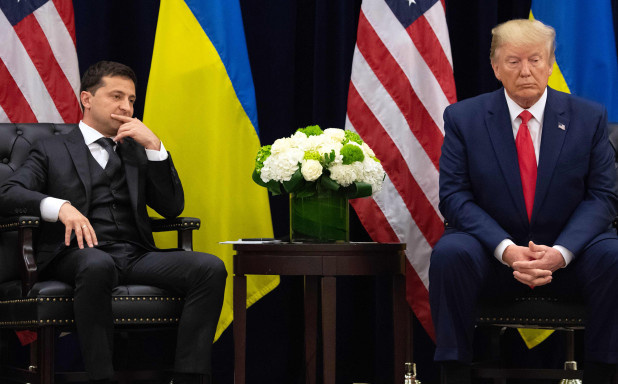 Then, after reminding Zelensky of US military assistance, Trump asked Zelensky for two political favors: 1) an inquiry into Democratic Presidential candidate Joe Biden and his son Hunter; 2) investigation of a conspiracy theory alleging collusion between Ukrainian officials and Democrats in the 2016 US elections.

When the discussion was revealed in September, as well as Trump’s freeze on $400 million in security aid for Kiev, it became a central piece of evidence in Trump’s impeachment trial.

For the newly-elected Zelensky, however, the phone call was more of an unwanted light on his battle against entrenched corruption in Ukraine’s political and economic systems.

The quid pro quo scandal failed to damage Zelensky’s reputation as a transparent leader. But one year on, he is a long way from success against a disease that may not have a cure.

Throughout his 2019 campaign, Zelensky called for a new beginning in Ukraine, a country whose government has been a puppet state for wealthy oligarchs since it gained independence in 1991. He won 73% of the vote on the promise of the mission.

In asking Ukraine for political favors, and in the campaign led by his lawyer Rudy Giuliani for disinformation to tarnish Joe Biden, Trump raised suspicions that he was reactivating the country’s corrupt networks.

But the concern failed to Zelensky’s reputation of political transparency. At the end of 2019, opinion polls continued to bestow a high approval rating, with his anti-corruption mantra well received.

In part, this was due to his response to the scandal, as he repeatedly affirmed that he did not agree to Trump’s requests but continued an amiable approach for the well-being of Ukraine. Speaking to Time magazine in December, he said:

Look, I never talked to the President from the position of a quid pro quo….

[But] you have to understand. We are at war [with Russia].

With Zelensky promising an end to the war, following Russia’s annexation of Crimea in 2014 and support of separatist efforts to split the country, most Ukrainians saw no reason to question the President’s intentions. 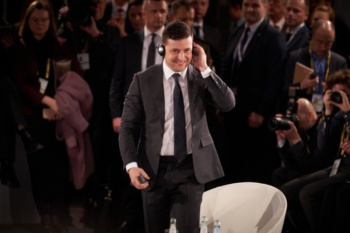 Zelensky’s reforms have included a law that prevents former executives of nationalized banks from reclaiming their positions. Other anti-corruption legislation secured more than $5.5 billion in aid from the International Monetary Fund. The President has distanced himself politically from oligarchs such as banking tycoon Ihor Kolomoisky.

In October, the US thinktank Atlantic Council wrote, “Finally some progress in Ukraine.” Foreign Policy reported in November that “far from drowning in graft, the country’s record is getting better and better”.

But now, more than a year into his presidency, Zelensky is a far cry from eliminating corruption in Ukraine. Transparency International reported that 23% of public services users have paid a bribe over the last 12 months. The country still ranks among the most corrupt in the world.

In 2017 GRECO, the Council of Europe’s anti-corruption body, published a report with 31 recommendations for Ukraine to reform the ranks of MPs, judges, and prosecutors. In 2020, they assessed that Ukraine has only enacted five.

Zelensky has also allowed oligarchs to creep back into certain industries in recent months. In May, the Finance Ministry fired the head of the supervisory board of the MGU, a company which oversees gas transmission, over long-standing corruption allegations and a stripping of regulations allowing tycoons to again benefit from energy companies.

And amid the economic damage of Coronavirus, the Kyiv Post reports that Zelensky’s office is using donations from oligarchs to keep the country afloat.

Inna Sovsun, former Deputy Education Minister and an activist with the opposition party Holos, challenges, “Zelensky promised to be different. He said that the old elite did everything wrong, but why do you then do the same things when you are in power?” 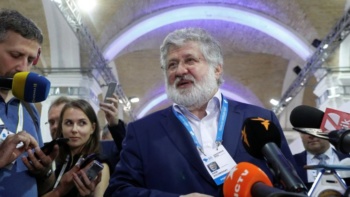 Defenders of Zelensky say the fundamental problem lies not in his methods, but in the scale of the task. They cite assessments such as as Carnegie Europe’s 2016 evaluation that corruption is part of Ukrainian culture.

Ukraine’s current position leaves Zelensky in a Catch-22. With the damage caused by COVID-19, he is caught between accepting support from the oligarchs and forging a deal with either Putin or Trump. In this predicament, there is no exit from the burden of corruption.

The Kyiv Post reported in May, “Nearly 30 years into independent statehood, nobody of any significance has been convicted of any major crime or corruption.” It concluded that under Zelensky, this “unhappy tradition is continuing”.

At the Munich Security Conference in February, Zelensky pleaded with his audience, “Please, please, stop saying that Ukraine is a corrupt country.” Months later, his plea has failed to mask the misgivings over his country’s political and economic system — and his government’s ability to deal with it.