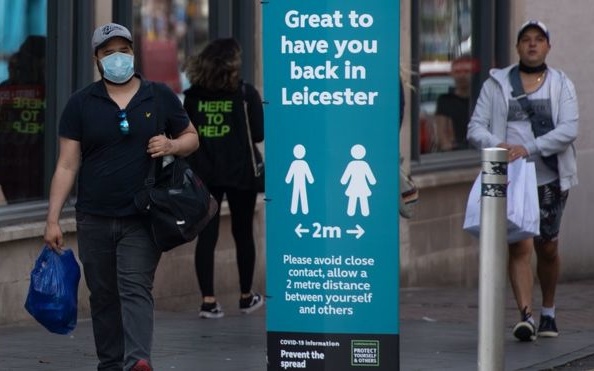 I studied at the University of Leicester in the UK’s East Midlands. I lived and worked in the city, was married there, made it my home for 13 years. Family and friends live there, and many memories bear the LE2 postcode.

So the news struck home when Health Secretary Matt Hancock announced last week that a local lockdown will remain in Leicester, as the rest of England opens pubs. The city had recorded 10% of all positive Covid-19 cases in the country over the past week, and 944 in the two weeks up to June 23. Its average is now 104 cases per 100,000 people.

The area mostly affected is in the Leicester East constituency and the North Evington district, a diverse multicultural part of the city with a predominantly Indian heritage of Sikhs, Hindus, and Muslims. It is known for its garment industry, takeaways, and paan shops — many of my childhood summer holidays were spent there with my cousins.

In the 2011 census, 37% of people in the city were Asian or British Asian and 28% of Indian heritage. Since then, there has been an influx of more Indian, Somali, and Eastern European residents because of the availability of jobs in the clothing industry.

The announcement of the lockdown was accompanied by social media slurs, such as this assertion on Huffington Post Online: “The majority of its 50% ethnic community can’t speak English and ignored government rules….It’s the Asian community who are spreading the virus and it’s the reason why so many of them are disproportionately dying from it.”

Another commenter said, “The reason why Leicester has gone into lockdown again is because the Asian and BAME population will not be social distancing and probably don’t wash their hands.”

Some lay the blame on mosques in the city, even though they remained closed throughout the lockdown, or on Muslim religious events such as the holy month of Ramadan and the festival of Eid.

None noted that the Federation of Muslim Organisations gave Coronavirus guidance to the Leicester community. On March 16, the FMO issued its initial advice. By March 24, it had ensured all mosques in the city were shut, remaining closed during Ramadan and Eid.

One Leicester resident contrasted the stay-at-home response with scenes of crowded beaches in Bournemouth:

Throughout the lockdown, I went for my daily walks and most times the hustle we see in Leicester was replaced by a ghost town. I think we saw more people on our screens descending on Bournemouth than I saw here.

Like all others in the UK, Leicester’s inhabitants have been confused by direction from a Government whose senior advisor drives 230 miles with his wife and child, and then takes a holiday trip to a castle to “check his eyesight”. If the Prime Minister’s father can defy Government advice to reach Greece via Bulgaria, then it may be difficult to direct someone not to move from Leicester to Loughborough.

BAME death rates are not due to ignorance but to inequality. Those in deprived communities are more at risk from Coronavirus due to living conditions, multi-generational households, and workplace conditions, including in textile and manufacturing factories.

According to Labour Behind the Label, some garment factories remained open throughout the crisis and ordered workers to report for duty even when they were sick, amid high levels of infection and allegations of “furlough fraud”. Public Health England found evidence that young men between 20 and 40 who work in garment factories and food processing plants were major vectors of transmission.

The working practices of some garment factories has long been a cause for concern for years. In 2019, a report by Parliament’s environmental audit committee found that wage exploitation was rampant in the city and across the sectors. MPs were told that it was an “open secret” that many of Leicester’s factories and workshops, numbering almost 1,000, were paying below the minimum wage.

Almost 45,000 children in Leicester are living in poverty, including more than half in some neighborhoods, even though more than 30,000 of them have at least one parent with a job. In the Leicester East constituency, 42% of children are in households under the poverty line, with an income of less than 60% of the national average.

In the top 10 English “hot spots”, the link is not ethnicity. It’s poverty and inequality. 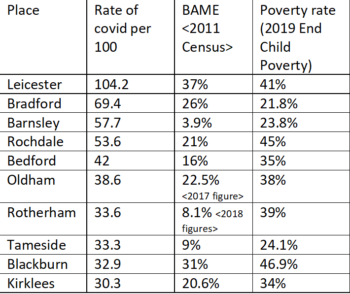 Blaming the “Muslim”, “the group of men in turbans”, or even a “woman dressed in traditional clothing but wearing a face mask” for Coronavirus is not just racist. It’s a diversion.

Look to those who sanctioned austerity for more than a decade, those who operated businesses as a 21st-century serfodom, those who slashed local authority spending on children’s services. Demand accountability from those who said “we are in this together”, even as they accepted the suffering of the vulnerable, marginalized, and economically stagnant.

I am watching Leicester, my long-time home, suffer from this pandemic. The best form of solidarity in this lockdown is to recognize why this has occurred, and what we can all do to ensure that the conditions in all Leicesters — poverty, deprivation, inequality — are addressed when this virus has receded.