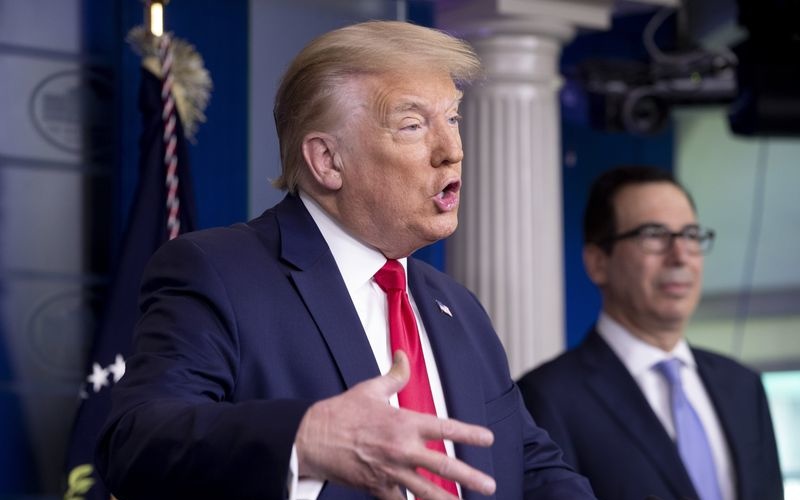 The Trump Administration declares “no regrets” as the daily rate of Coronavirus reaches 53,399 cases, the sixth record in the past nine days.

Rates are rising in 42 of 50 states. In 21 states, there are surges of more than 70% in the past 14 days. Florida, with more than 10,000 new cases, North Carolina, Tennessee, and Texas set daily records on Wednesday.

The US’s seven-day average for daily cases has doubled since June 13, and hospitalizations are rising at their highest rate since April 21.

But Treasury Secretary Stephen Mnuchin, asked if the White House regretted its pressure on states to reopen businesses and public spaces in defiance of public health guidance, said, “No, absolutely not….I think we’ve had a very careful plan,””

Mnuchin’s dismissal of the surge followed Donald Trump’s proclamation on Wednesday that the virus “will sort of just disappear”.

After Trump denied any threat for weeks, the White House medical advisors finally pushed through an announcement of stay-at-home and social distancing on March 16. But Trump, concerned with the stock market and his re-election, immediately pursued the lifting of the measures. He initially set a date of April 12 and then May 1.

Announcing a June bounce-back in job numbers after real unemployment topped 20%, Trump proclaimed yesterday, “The crisis is being handled. It’s opening up far faster than anybody thought even possible, and more successfully.”

But at the same conference, Mnuchin tried to give the Trump camp an escape hatch from any blame over the surge. He said the crisis is “primarily the states’ responsibility”.

The White House’s top infectious disease expert, Dr. Anthony Fauci, again punctured the Administration’s denials. In a live stream with the American Medical Association, he summarized, “What we’ve seen is a very disturbing week.” He told the BBC:

The problem we’re facing now is that in an attempt to reopen or open and get it back to some form of normality, we’re seeing very disturbing spikes in different individual states in the United States….

We’ve got to get that under control, or we risk an even greater outbreak in the United States.

With no effective leadership from the Administration, some governors — including Trump allies — continued to roll back the “re-opening”. Texas Gov. Greg Abbott ordered the wearing of masks in public, writing in his order:

The step is a sharp reversal by Abbott, who this spring blocked local legislators from requiring masks.

The leaders of major businesses sent an open letter to the White House and State governors: “We believe that a national mask standard, implemented locally, offers the surest way to protect public health and promote economic recovery.”

But Florida Gov. Ron DeSantis, feted by Trump in late April as the governor said Coronavirus would be vanquished in two weeks, insisted that he was “not going back”. He claimed that “people going to a business is not what’s driving” the increased infections, blaming young people for not observing social distance.

Masks will not be mandatory for the event, which will be attended by President Trump. PEOPLE ARE FED UP!https://t.co/Oykdz4xThD

On Thursday, Cain tested positive for Coronavirus, after attending Trump’s rally in Tulsa, Oklahoma on June 20.

“Two administration officials” said Vice President Mike Pence cancelled a campaign appearance in Arizona on Tuesday after Secret Service agents who would accompany with him tested positive or showed symptoms of Coronavirus.

Pence limited himself to a meeting with Trump ally Gov. Doug Ducey and a briefing at a Phoenix airport.