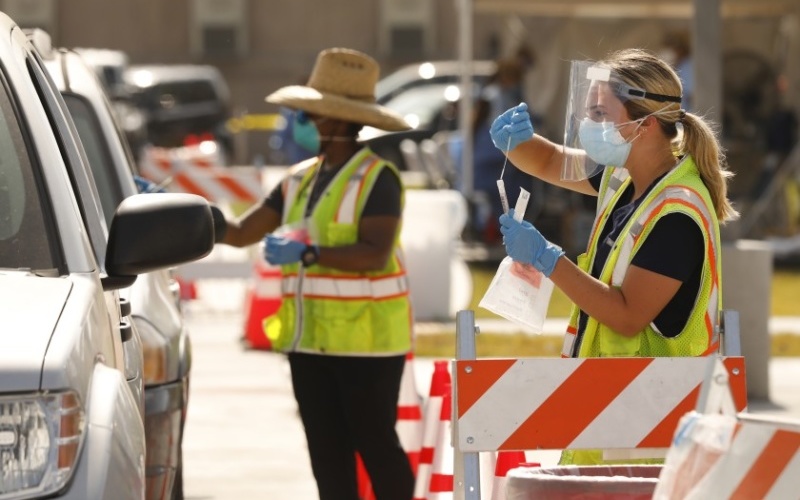 California is among the latest US states to suspend the lifting of Coronavirus restrictions, as infections continue to surge across America.

The daily rise was below the record of more than 68,000 recorded on Friday, but infections are still rising in 45 of 50 states. Tennessee, Kansas, and Washington State reported daily highs. A day after setting a US record — and ranking 4th in the world — with more than 15,300 cases in 24 hours, Florida announced more than 12,600 infections.

California Gov. Gavin Newsom said Monday that he would again close bars, restaurants, wineries, movie theaters, zoos, and card rooms. In at least 30 counties with about 80% of the state’s population, many indoor businesses will shut, including fitness centers, hair salons, and barbershops, and malls. Places of worship and non-essential offices must also close.

California has a 7-day average of more than 8,000 new cases per day, more than double the increase of a month.

The Los Angeles and San Diego school districts, with a total of about 825,000 students, announced online-only instruction in the autumn.

More than a third of California’s cases are in Los Angeles County, and there have been 18 community outbreaks in San Diego County over the past week.

Donald Trump, devoted to “reopening” for his reelection, has threatened to cut Federal funding for any States and schools who do not provide complete in-class instruction. He declared Monday, “Schools should be opened.”

In defiance of medical and public health advice, including from White House experts and the Centers for Disease Control and Prevention, he asserted, “You’re losing a lot of lives by keeping things closed.”

The American Academy of Pediatrics, the American Federation of Teachers, the National Education Association and AASA, the School Superintendents Association, issued a statement on Friday that reopening recommendations should be “based on evidence, not politics”.

We should leave it to health experts to tell us when the time is best to open up school buildings, and listen to educators and administrators to shape how we do it.

The joint statement from the Los Angeles and San Diego school districts explained:

Those countries that have managed to safely reopen schools have done so with declining infection rates and on-demand testing available. California has neither. The skyrocketing infection rates of the past few weeks make it clear the pandemic is not under control.

Concern from Oregon to Texas

Neighboring Oregon also stepped back from reopening. Gov. Kate Brown is banning indoor gatherings of more than 10 people for birthday parties, potlucks, book clubs and dinners, although restrictions will not be renewed for businesses or churches “at this time”.

The state set a record on Thursday with 389 new infections. Officials said gatherings for the July 4 weekend could produce further rises.

Oregon Health Authority models predict that Portland hospitals will be at capacity in a month, and hospitals throughout the state will be overwhelmed within 90 days.

In Texas, a top medical adviser to Gov. Greg Abbott said further rollback may be necessary.

Dr. Mark McClellan, a former commissioner of the Food and Drug Administration, said a lockdown is a “real possibility”: “I don’t think we have much time, before having to go to a more extreme step.”

Abbott was among the first governors to follow Trump’s command for reopening in early May. At the time, Texas had just over 29,000 cases and over 800 deaths. On Monday, there were almost 270,000 infections, the third-highest total in the US after New York and California, and more than 3,200 deaths.

Houston Mayor Sylvester Turner said yesterday that he asked the governor to impose a shutdown for a “minimum of two weeks”.

McClellan said, “The virus is out there in our communities all over Texas. Maybe there are a few small exceptions, but not really anymore.”

About 5.4 million Americans lost their health insurance between February and May because of unprecedented job losses.

Families USA found the increase was almost 40% higher than previous record of 3.9 million during the 2008-2009 recession.

Of the losses, 46% were in California, Texas, Florida, New York, and North Carolina. In Texas, the uninsured rose from about 700,000 to nearly 4.9 million.

In the 37 states that expanded Medicaid under the Affordable Care Act, 23% of unemployed workers lost insurance. The impact was nearly double at 43% in the 13 states that did not expand Medicaid, including Texas, Florida and North Carolina.