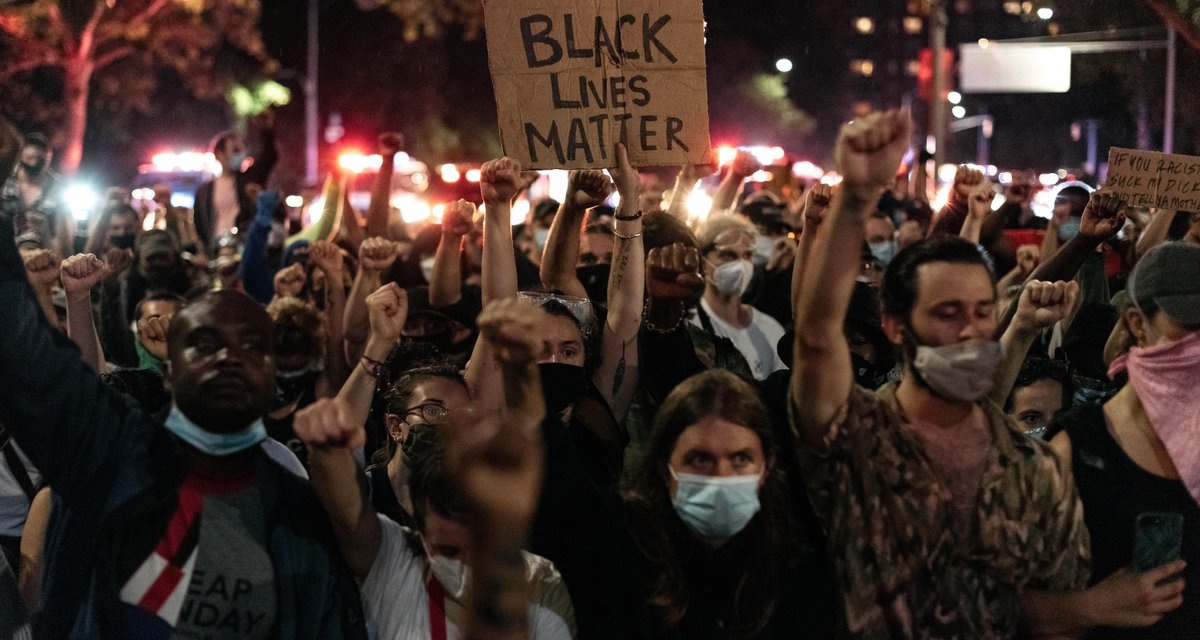 Donald Trump invokes George Floyd’s name to praise himself, in a presentation of a misleading Government report on unemployment.

Trump quickly arranged a White House appearance after a Friday report by the Bureau of Labor Statistics said, on the surface, that the official unemployment rate had unexpectedly fallen from 14.7% to 13.3%.

The Bureau later admitted that it had significantly undercounted the unemployed, bringing the rate in May to 16.3%

But Trump had already cloaked himself with Floyd, who was murdered at the hands of police in Minnesota on May 25. The homicide sparked demonstrations in more than 140 US cities — demonstrations threatened by Trump with shooting, “vicious dogs and ominous weapons”, and deployment of the American military.

Trump continued that the report was a “a tremendous tribute to equality”, even as almost two weeks of protests have highlighted long-standing issues of violence, injustice, and inequality. Asked by a reporter how he would achieve equality, Trump declare:

Because our country is so strong. And that’s what my plan is. We’re going to have the strongest economy in the world. We almost are there now.

In fact, even the official rate of 13.3% for May is almost four times the 3.5% of February. Another 2 million Americans filed for unemployment last week, bringing the total to more than 40 million since mid-March.

And the official rate of unemployment for African Americans continued to rise, reaching 16.8%. For Latinos, the figure rose to 17.6%.

Officially, about 21 million Americans are unemployed, the highest rate since 1940.

Joe Biden, the presumptive Democratic nominee for President, responded to Trump: “For the President to put any other words in the mouth of George Floyd is despicable.”

Having invoke Floyd, Trump returned to his denunciation of the protests, again threatening State Governor that they look “weak” if they don’t confront rallies: “You have to dominate the streets.”

See also A Movement Rises from a Murder: The George Floyd Protests

The Error Over Unemployment Numbers

Economists had expected another rise in the rate amid the Coronavirus pandemic, which has now claimed 109,143 American lives with almost 1.9 million confirmed cases. But payrolls rose 2.5 million in May after falling 20.5 million in April, the largest drop on record.

Analysts searched for an explanation for the surprise. Some saw the effect of a lifting of stay-at-home measures over Coronavirus, helping the restaurant, hospitality, and leisure industries.

But others saw a possible manipulation of the figures. Robert Shapiro, an International Monetary Fund advsior explained and, former Undersecretary of Commerce, explained that almost 9 million Americans may have “disappeared” from the ranks of the unemployed. He cited a sudden shift in numbers from the Bureau of Labor Statistics.

Today’s unemployment report is not credible. BLS says that in the week of May 16th, when the jobless survey took place, 29,965,415 Americans received unemployment insurance benefits. Yet, the BLS also said today that 20,985,000 Americans actually were unemployed that week …

… That’s a gap of 8,980,415 people. Recognizing them as among the unemployed raises the May jobless rate 5.7 percentage points to 19.0 percent

The Bureau admitted that it may have significantly undercounted the number of furloughed workers, classified as “unemployed on temporary layoff”, due to an error.

More than 15 million workers, about 73% — of the officially unemployed, are on temporary layoff and hope to be recalled if business rebounds.

The Bureau said that, if the furloughed had been counted correctly, the official unemployment rate would have been 16.3%.

The number of overall jobs still rose in May, the Bureau explained: if the furloughed had been correctly identified in April, the official rate would have been close to 20% rather than 14.7%

But if those “marginally attached to the labor force” — not currently looking for work but available for employment —- are added, the current rate is still 21.2%.

And that number does not include more than 6 million people who have dropped out of the workforce entirely.