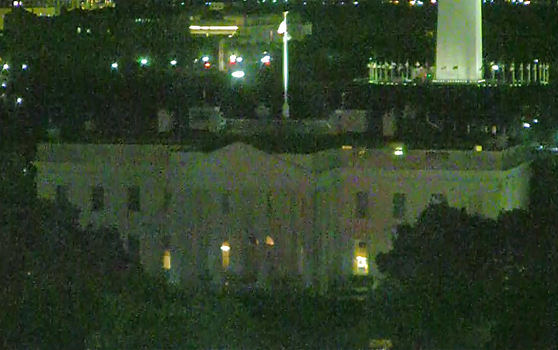 A darkened White House amid the demonstrations over George Floyd’s death, May 31, 2020

Donald Trump hides in a White House bunker as protests continue across the US over last Monday’s death of George Floyd at the hands of police in Minnesota.

Trump was first moved to the secure facility on Friday night, used during the 9-11 attacks, on Sunday nights amid demonstrations in Lafayette Park outside the White House in Washington.

Trump tweeted threats from the bunker, including a declaration that protesters could be attacked with “vicious dogs and ominous weapons” and the false accusation that Washington DC mayor Muriel Bowser had not provided police to protect the White House.

While pursuing his Twitter jabs at Democrats, the “Lamestream Media”, “Antifa”, and “THUGS”, Trump has not addressed the nation. On Friday, he abruptly ended a White House appearance as he was asked about the demonstrations in at least 140 US cities.

On Sunday night, the White House went dark, turning off almost all of its external lights, as police fired tear gas. Protests had begun peacefully, but later windows of buildings were smashed, cars were overturned, and fires were set, including at the historic St John’s Church.

Rallies continued across the US despite curfews in at least 25 cities in 14 states. There were clashes in New York, Boston, and Philadelphia. In Birmingham, Alabama, protesters tried to take down a Confederate monument.

But the prevalent spirit was one of seeking justice and equality. In Oakland, California, Donavon Butler drove a white minivan carrying his wife and four children. His 5-year-old son Chase hung out the back window, his right fist raised and his left hand holding a cardboard sign: “Mama! I can’t breath. Don’t shoot.”

“The world we live in is not equal. People look at us different,” Butler told his son.

In Minneapolis, where Floyd was killed and clashes led to a curfew and the mobilization of the National Guard, volunteers and school staff launched a food drive.

Meanwhile, as Trump stayed out of public view on Sunday, his advisors split over whether he should give a national address.

Trump’s son-in-law Jared Kushner pressed for the appearance, but Trump and other advisors decided against a Sunday speech.

National Security Advisor Robert O’Brien maintained, in a CNN interview, that Trump has made “very eloquent comments” about Floyd’s death and “addresses the country almost every day” on social media.

Events would include appearances with law enforcement officials, African American leaders, and “stakeholders”.

But hidden in the White House, Trump showed no sign of wanting dialogue yesterday. Amid injuries to more than 50 journlists, including by gunfire from security forces aiming at them, Trump’s Twitter timeline was strewn with attacks on “the Lamestream Media”, “FAKE NEWS”, “Enemy of the People”, and “truly bad people with a sick agenda”.

Attempting the diversion that protests are led by violent extremists, he said “ANTIFA” would be declared a “terrorist organization”. And he continued his political jabs at “Democrat run Cities and States”.

His political enabler, Attorney General William Barr, declared without evidence that the demonstrations are organized by “groups of outside radicals and agitators”, saying he will prosecute them.

However, Sen. Tim Scott, the most prominent GOP elected official, noted Trump’s approach via Twitter, including the incitement to violence of “when the looting starts, the shooting starts”.

“Those are not constructive tweets, without any question,” Scott said.