A Border Failure: Pakistan and Coronavirus 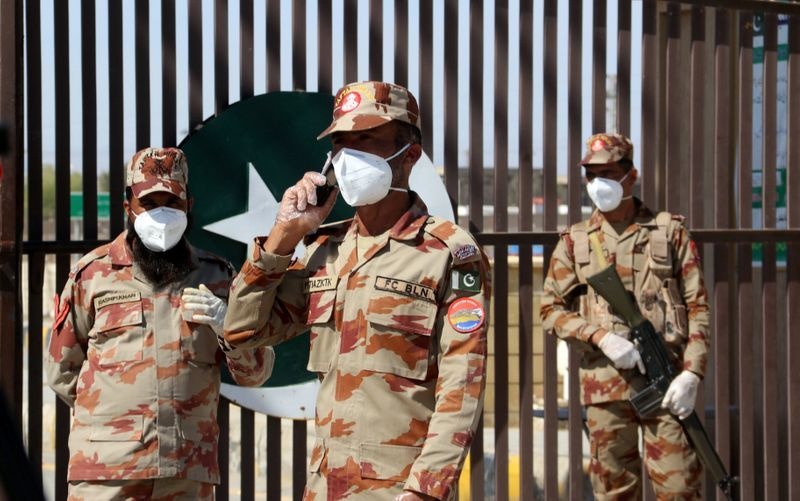 Pakistani troops in front of a closed gate of the border with Iran, Taftan, Pakistan February 25, 2020 (Naseer Ahmed/Reuters)

In Pakistan, the management of Coronavirus on the provincial and national levels has laid bare gaps in governance and structural issues. And the pandemic has shed light on Islamabad’s problems with borders in Asia.

As COVID-19 spread in China, the Pakistani government found itself in a difficult situation. Chinese Government scholarships fed a spike in the number of Pakistanis studying in China, with reports of about 19,000 in educational institutes by 2017. There were about 1,300 students in the Hubei Province and 800 in Wuhan city, the epicenter of the pandemic.

The government decided against the repatriation of the students in Hubei, presumably out of fear that this might inadvertently bring Coronavirus to Pakistan with its underdeveloped health facilities and infrastructure. Families endured emotional and psychological trauma, but critics of the government later acknowledged the decision as the right one. Chinese authorities did not press Islamabad and provided the stranded students with healthcare.

Unfortunately for Pakistan, the challenge from COVID-19 did not end there, as the country’s western neighbor Iran emerged as the next epicenter of the virus. The threat was magnified by the origin of the outbreak in the holy city of Qom: thousands of pilgrims from Pakistan traveled to the Islamic Republic throughout the year visiting shrines. With the pandemic taking hold in Iran, most of these pilgrims re-entered Pakistan through the town of Taftan in Balochistan Province.

Concerned provincial authorities did not have sufficient resources to enact a quarantine regime at the Pakistan-Iran border, with isolation of returnees in accordance with health protocols. They also faced political difficulty with Islamabad

Under the 18th Amendment of the Pakistan Constitution, health care is a provincial responsibility. But the Federal Government ignored the local pleas and decided to reopen the border.

Federal authorities indicated that, unlike China, the Iranian Government was not willing to keep Pakistani citizens. The officials said they could not deny the right to return.

As groups totaling about 6,000 people crossed back into Pakistan, they had to stay in squalid camp conditions. There was little segregation to ensure social distance. Province-center coordination coming apart at the seams: defying provincial suggestions, the Federal Government reduced the quarantine period to one week. Moreover, it was only enforced for pilgrims and students.

Pakistan has been relatively lucky so far, with only 834 deaths. But the pandemic has revealed a structural malaise at the heart of government. The 18th amendment was meant to scale up provincial autonomy, but it has only added to political confusion with many provinces dependent upon the whims of the center. The border failure with Iran could yet have serious consequences.