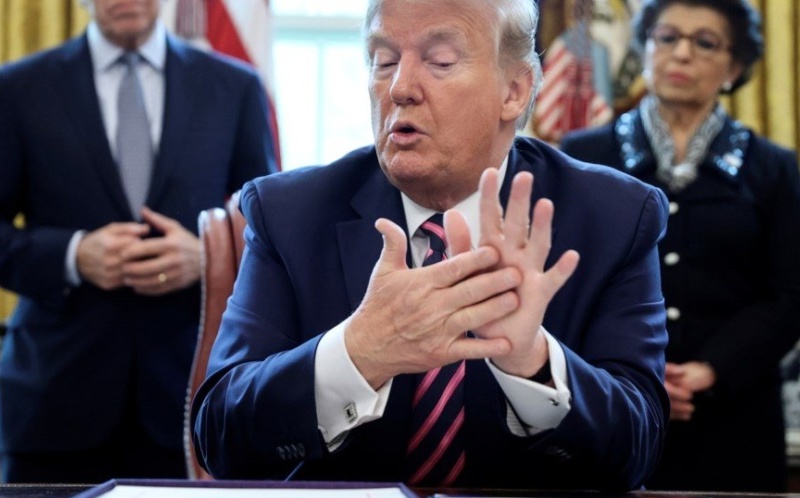 A day after recommending injection of disinfectant as a Coronavirus cure, Donald Trump lies about his comments.

Trump said at a White House briefing on Thursday, as medical advisors sat by silently:

I see the disinfectant where it knocks it out in a minute — one minute — and is there a way we can do something like that by injection inside, or almost a cleaning? Because you see it gets in the lungs and it does a tremendous number on the lungs, so it would be interesting to check that.

Medical and health care professionals reacted with disbelief and horror, explaining that the injection could be fatal. The Food and Drug Administration, Centers for Disease Control and Prevention, State health authorities, and disinfectant manufacturers issued urgent advisories about the danger.

Household cleaners and disinfectants can cause health problems when not used properly. Follow the instructions on the product label to ensure safe and effective use. Learn more about cleaning and disinfecting your home: https://t.co/PW0UbW8KeE. pic.twitter.com/rdcR9QJNIR

So on Friday, Trump claimed to journalists that he was not being serious: “I was asking a question sarcastically to reporters like you just to see what would happen.”

In fact, Trump’s remark on Thursday was directed to William Bryan, the head of science at the Department of Homeland Security, who had said Coronavirus dies quickly when exposed to sunlight and even faster with disinfectants.

Here's a mashup of Trump claiming today he was just asking "a very sarcastic question to the reporters in the room" when he mused about disinfectant injections as a possible coronavirus miracle cure, followed by the original clip showing beyond a doubt that he was not doing that. pic.twitter.com/wby4ucd59Q

White House officials also tried the line that Trump was only suggested a study of the ingestion of disinfectant, rather than recommending it as a cure.

However, they acknowledged that Trump had been loose in his remarks. Some tried to blame Bryan, whose background is in energy infrastructure and security, by asking why he had given a presentation despite having no expertise in science or health care.

Vice President Mike Pence’s advisors pressed for Bryan to appear at Thursday’s briefing, but other officials were concerned that his claims had not been verified.

In a sign of Trump’s concern over the fiasco, he uncharacteristically took no questions from reporters after Friday’s White House briefing.

The Surgeon General, Dr. Jerome Adams, tried to clean up the mess with a Twitter message:

A reminder to all Americans- PLEASE always talk to your health provider first before administering any treatment/ medication to yourself or a loved one.

Your safety is paramount, and doctors and nurses are have years of training to recommend what’s safe and effective.

Covering Up for Trump

Adams also tried to limit the damage to Trump, recycling the words of Press Secretary Kayleigh McEnany: “President Trump has repeatedly said that Americans should consult with medical doctors regarding coronavirus treatment.”

Birx looked on, trying to hide her disquiet, as Trump rambled on Thursday. Yesterday she minimized his claims.

Dr Birx defends Trump musing about disinfectant injections: "When he gets new information, he likes to talk that through out loud … I think he just saw the information at the time immediately before the press conference and he was still digesting." pic.twitter.com/UPr9XwPhaq

Grenon claimed that chlorine dioxide is “a wonderful detox that can kill 99% of the pathogens in the body …[and] can rid the body of Covid-19”.

A federal judge has issued a temporary injunction against Florida-based Genesis II, which styles itself as a religion, marketing the bleach.

Grenon quoted his appeal in a Sunday broadcast, “Dear Mr President, I am praying you read this letter and intervene.” He said 30 supporters had also written the White House.

On Friday, Grenon wrote on Facebook: “Trump has got the MMS [miracle mineral solution] and all the info!!! Things are happening folks! Lord help others to see the Truth!”

A “person familiar with the situation” claimed senior administration officials do not know about Grenon or his letter.