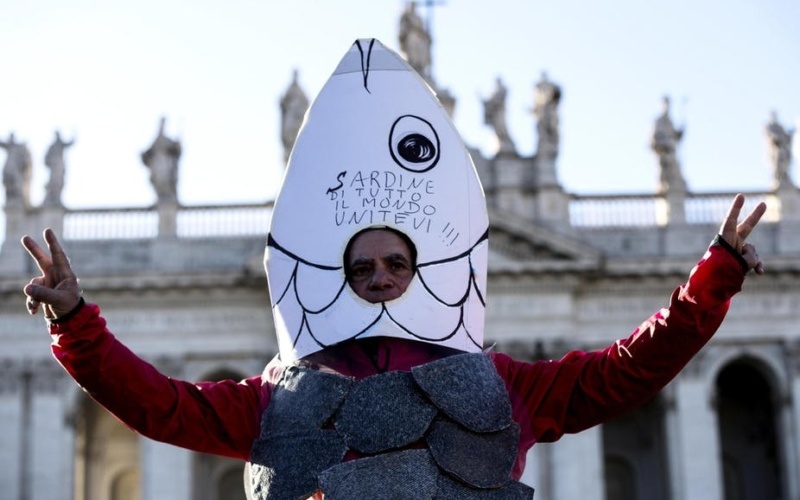 Supporter of The Sardines anti-populist movement in Italy — they helped check Matteo Salvini’s Lega but can they prop up a national government?

Co-written with Davide Pellegrino of the University of Torino and Originally published by The Conversation:

A regional election in northern Italy has delivered a blow to populist right-wing figure Matteo Salvini. But while the center-left candidate in the elections for the Emilia-Romagna region saw off the populist threat – with the help of a grassroots campaign movement called The Sardines – his party’s national government looks far from secure.

Stefano Bonaccini’s re-election as the governor of Emilia-Romagna matters because it has given hope that the erosion of the left’s traditional dominance of local politics in the four central regions once known as the red belt — Tuscany, Umbria, the Marches and Emilia-Romagna — is not unstoppable.

Emilia-Romagna is the richest, most populous and, historically, also the most solidly left-wing area in the red belt. But the right-wing League has been growing in popularity in the area, especially since Salvini took over the party in 2013.

He saw this regional election as a golden opportunity to bring down the government – a fragile coalition between the center-left Democratic Party (PD) and the anti-establishment Five Star Movement (M5S). The latter had been in national government with Salvini until their partnership collapsed in 2019 and many see the new arrangement as being geared more towards keeping Salvini away from power rather than providing a functioning administration.

Matteo Salvini is Down But Not Out in Italy

Salvini therefore sought to turn this regional election into a test of whether the national government enjoyed the confidence of the electorate. A right-wing victory would have set off a campaign to force the governing parties to stand down and hold a general election.

The League has become increasingly popular in Emilia-Romagna, while the incumbent PD has been shrinking, so the vote was considered winnable by Salvini and his supporters. Pre-election polls showed the race between Bonaccini, the PD-backed candidate for the governorship, and Lucia Borgonzoni, the League’s candidate, was in fact very tight.

Salvini ran a polarizing campaign, which in turn sparked a new grassroots movement on the left called the Sardines. This group was started by ordinary citizens opposed to the radicalism of Salvini’s League.

Turnout was 67.7% in this regional election – a significant increase on 2014, when just 37.7% of eligible voters took part. This mirrors recent events in Austria, Germany, the Netherlands, Switzerland, and Spain, where the possibility of an electoral victory for a populist radical right-party has increased interest in politics and boosted participation.

But Bonaccini’s success appears heavily tied to his personal appeal. He himself is considerably more popular than the coalition of parties that backed his election. Meanwhile, the PD’s ally in government, the M5S, has almost disappeared in the region. It shrank to a pitiful 4.7% of the vote, while the League won 32%, similar to its share in the European elections last May. These are all bad signs for the government.

What Now for National Government?

The very poor performance of the M5S in this election, and in the other regional election held on the same day in Calabria), is bound to cause instability for the national government. The party has never done well at local and regional levels but this result, coupled with recent turmoil at the top, will be taken by many as a sign of imminent collapse.

The party’s leader, Luigi Di Maio, recently resigned, unable to command the support of the party as it slumped in the polls since entering government one and a half years ago.

Since 2018, 30 M5S parliamentarians have been fired or have quit to join the League or other groups. More could now follow, which would be deadly for a governing coalition with a very small majority in the Senate.

Even if no one leaves, internal tensions within the M5S may still bring the governing coalition to an end, as more and more Five Star representatives judge its experience in power alongside the left as a failure. Moving to the opposition benches would at least allow the M5S to recover its long-lost “purity” as an anti-establishment party

As for the PD, it is still in search of an identity and an electoral strategy 12 years after having been founded. In Emilia-Romagna, it basically owes its victory to others (particularly the incumbent governor, Bonaccini, and his ability to attract the votes of former M5S supporters).

While it is difficult to say when a general election will happen, it seems unlikely that the governing coalition can hold. The PD’s victory in Emilia-Romagna has bought it a little time, but we do not expect the two governing parties to stick together until the end of the legislature.