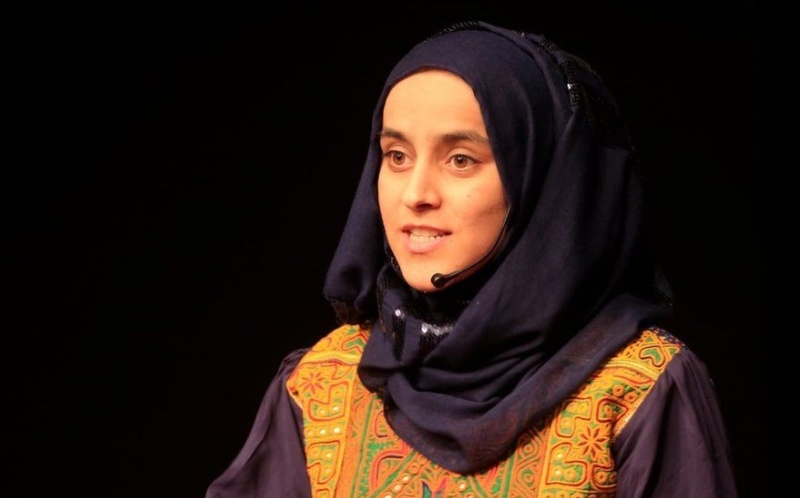 Nargis Taraki is leading the way on women’s rights. But can education in Afghanistan ensure that others join her?

“I am the 5th daughter in my family and it is socially unacceptable if there is no boy child in the family even after 5 daughters. People believe that girls cannot do anything in life and hence they suggested my parents to exchange me for a boy child when I was born.”

Nargis Taraki is speaking about the social perception of girls in Afghanistan. A citizen of the country, Nargis was recently featured on the BBC list of 100 influential and inspiring women. She saw her family being threatened by the Taliban regime in Afghanistan. Her uncle was killed in front of villagers for not adhering to the rules set by the extremist organization.

Today she is serving as an Advisor to the Ministry of Finance, Afghanistan. She has spoken at Kabul University on women’s rights and citizenship, defying Taliban warnings.

Nargis persists, leveraging her strengths and profile for the future of Afghan women. But the challenge is great: while the plight of Afghan women has been widely reported in the media for almost two decades, they continue to suffer from sexual violence and discrimination. The restoration of rights appear forlorn.

In December 2003, two years after a US-supported offensive pushed the Taliban out of Kabul, several women took part to support the new Constitution – Loya Jirga, and for installation of women’s rights and reservation in the same. In 2011, 68 women were elected to Parliament, with 28% of the seats in the lower house reserved for them.
But the situation remains dismal for women’s education. Even attending school is a risk. In 2015, attackers on a motorbike hurled abuse at teenage girls on their way to classes and threw acid on them as “punishment”.

The pictures of Farkhunda Malikzada, half-burnt and disfigured, are still on railings near the Kabul River: she was attacked by a mob in 2015 after being falsely accused of burning a Qur’an. Four men were sentenced to death, but this was later commuted to prison terms.

The 2016 UNICEF report on Afghanistan documented:

On 29 January 2015, a group of Anti-Government Elements left a warning in one of the girl’s high school on a letter stating that schools were ‘brothels’ and that the community should stop sending girls to school otherwise they would face the same fate as the army public school in Peshawar, Pakistan. They left a detonation that destroyed three classrooms – Nangarhar province, eastern region.

This was just one incident among many which have torn the fabric of society in one of the most dangerous places of the world.

Meanwhile, education has been under attack. International donors have bolstered Afghanistan’s rebuilding of schools, but funding has declined in recent years. “Permanently absent students” fill the vast gap between the number of those enrolled and those attending classes. A decrease in primary school attendance has been largely driven by a decline in the number of girls being taught.

In January 2016, UNICEF estimated that 40% of all school-age children in Afghanistan do not attend school. Drawing from Afghan ministry data, UNICEF said 66% of Afghan girls of lower secondary school age — 12 to 15 years old — remain absent, compared to 40% of boys in the age bracket.

During the Taliban’s rule from 1996 until 2001, women were ostracized from social and professional life and barred from education and work.

Addressing Afghan women after the ousting of the Taliban from national power in 2001, US First Lady Laura Bush sought a worldwide effort to focus on brutality against women by Al Qa’eda members. But Amnesty International reports that Afghanistan continues to be amongst the worst countries for women to live, even if there has been a leap forward in political participation.

Some international programs have had limited, if any effect. Promote, a project of the the US Agency for International Development, had a budget of $280 million to assist women in jobs and pursuit of financial independence. But Afghanistan’s First Lady Rula Ghani claimed that money was not used effectively and said short-term training did not provide permanent employment for women.

So has the situation drastically changed post the withdrawal of Taliban from majority of the Afghanistan? Even after the withdrawal of Taliban insurgents, women continue to live in fear. They fear that hollow pledges are being undertaken for the seamless departure of the Western forces and past practices may be again reinforced, if the insurgent group regains the control. Remember, a portion of the country is still being controlled by the terrorist group.

The US has been the largest source of funding for the education sector outside the Government’s budget, contributing $324 million — 35 % of all direct funding between 2010 and 2015. The World Bank-funded Education Quality Improvement Project was implemented from 2008 to 2017 with a budget of $438 million.

UNICEF reports have documented the occupation of schools as local police bases, and even the burning of wooden chairs and desks for cooking. In one case in northeast Afghanistan, 700 students — 340 girls and 360 boys — and 20 teachers were shut out.

More than 18 years after the US-backed offensive, the Taliban has regained control of much of Afghanistan. Talks resumed after seeking a permanent ceasefire and a political resolution, but international financial support is receding. Afghan authorities will have to establish a political and social structure backing education and participation for women as well as men.

Nargis Taraki, who with her father’s unflinching support topped the class at Kabul University. She is now the Director at an NGO working for education rights, in addition to working with the Finance Ministry. She was recently selected for the International Visitor Leadership Programme in the US.

The steps of valorous people like Nargis are crucial, but these “agents of change” need to be empowered. Afghan girls continue to take the risk of attending classes in secret schools, while development projects are in peril because of the funding crisis.

Meanwhile, at home and overseas, Nargis pursues her efforts for equality and opportunity. “Every time I go abroad, I simply wish that my country could be as peaceful as that country,” she says.