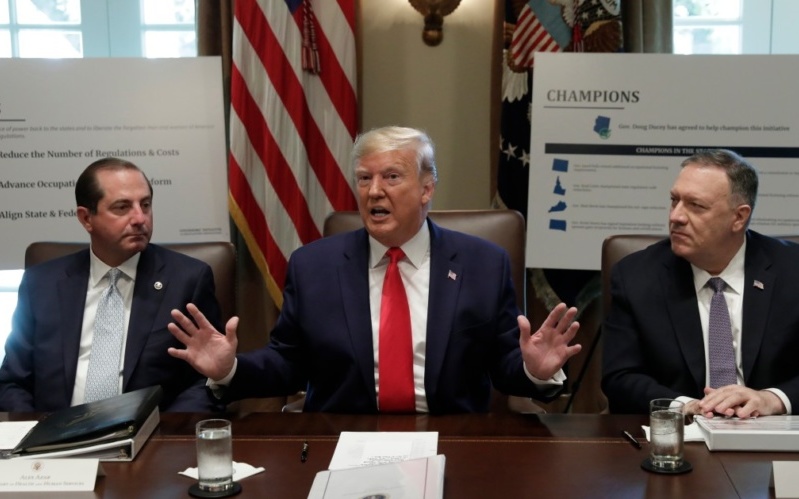 Donald Trump speaks to reporters for 71 minutes during a Cabinet meeting at the White House, October 21, 2019

Donald Trump frets over Republican defections to support his impeachment and conviction, telling the GOP to “get tougher” over the inquiry.

Railing for more than an hour to reporters during a Cabinet meeting, Trump assailed the “phony investigation”, spurred by his campaign to press Ukraine to take action against Presidential candidate Joe Biden and the Democratic Party.

Trump specifically named Sen. Mitt Romney, the 2012 GOP nominee for President, as a reason why the Republicans “don’t stick together like the Democrats”.

Romney has criticized Trump’s demands of China as well as Ukraine to investigate Biden and the Democrats, while stopping short of supporting impeachment.

In the rambling comments, Trump also rejected the US Constitution, denouncing its “phony emoluments clause” which prohibits a President from profiting personally from his office. The outburst came a day after Trump was forced to withdraw his plan to host next year’s G7 summit at his Doral resort in Florida.

Doral in Miami would have been the best place to hold the G-7, and free, but too much heat from the Do Nothing Radical Left Democrats & their Partner, the Fake News Media! I’m surprised that they allow me to give up my $400,000 Plus Presidential Salary! We’ll find someplace else!

Trump made up a story about America’s 1st President to claim that he had been wronged: “George Washington, they say, had two desks. He had a presidential desk and a business desk. You people with this phony emoluments clause.”

“People who have spoken with him” said Trump is bolstering himself by telling friends that Democrats are divided over how to proceed in the impeachment inquiry. But “advisors” said most of Trump’s confidantes have counselled that House Speaker Nancy Pelosi is determined to proceed.

Privately, Republican legislators are concerned that Trump and a small inner circle are acting erratically and leaving them in the dark about development. They have noted the mounting revelations about Trump and his personal attorney Rudy Giuliani over the Ukraine campaign, and the opaque process by which Trump awarded the hosting of the G7 summit to himself.

Some have also noted Trump’s preference for venting on Twitter rather than organizing a defense. Trump did nothing to alleviate that perception on Monday, tweeting and retweeting all day about House Intelligence Committee chairman Adam Schiff.

Censure (at least) Corrupt Adam Schiff! After what he got caught doing, any pol who does not so vote cannot be honest….are you listening Dems?

House Democrats have overcome the White House attempt to block the inquiry, including defiance of subpoenas, to interview a series of current and former US officials about the Trump-Giuliani pressure on Ukraine. The depositions have built the case of the two men bypassing official US policy and, in the case of Giuliani, possibly acting illegally.

On Tuesday, House investigators will speak with William Taylor, the US charge d’affaires in Kiev. In text messages in early September, Taylor raised the “nightmare scenario” of Trump’s order to suspend military aid to Ukraine and his demand for investigations of Biden and the Democrats: “[It is] crazy to withhold security assistance for help with a political campaign.”