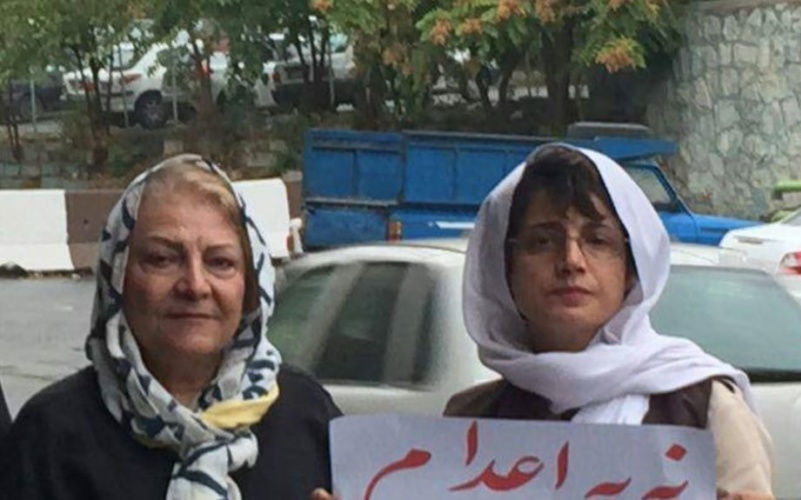 Women’s rights activist Giti Pourfazel (L) with attorney Nasrin Sotoudeh, who is serving a 26-year sentence over her work and activism

The trial of 14 women’s rights activists, arrested over their demand for the Supreme Leader’s resignation, will begin on Monday in Iran’s capital Tehran.

The women have been charged with “propaganda against the state” and “assembly and collusion against national security”, said Mohammad Hossein Aghasi, an attorney representing three of the defendants.

We rise against this anti-woman regime that has wiped out our human values and demand a complete passage from the Islamic Republic and drafting of a new Constitution for the establishment of a state in which women’s dignity, identity and equal rights are recognized in all areas.

One of the signatories, attorney Giti Pourfazel, said at the time, “Twenty million other Iranian women could count themselves as the fifteenth signatory….We cannot tolerate this degree of discrimination any longer.”

Iranian authorities have stepped up their crackdown on public expression by women’s rights activists. There have been a series of arrests over rallies on International Women’s Day in March and on May Day, as well as against those protesting compulsory hijab.

At the end of July, two women’s rights activists, mother Monireh Arabshahi and daughter Yasaman Aryani, were sentenced to 16 years for not wearing hijab as they handied out flowers on a Tehran subway train on International Women’s Day. They were convicted “encouraging and promoting corruption by de-veiling”, “collusion and assembly to act against national security”, and “propaganda against the state”.

Another activist, Mojgan Keshavarz, was an additional 7 1/2 years for “blasphemy”.