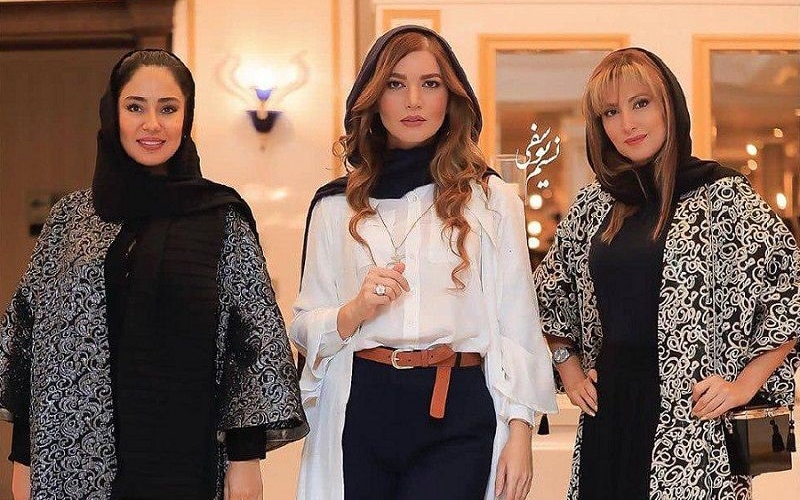 Matin Sotoudeh (C) at the premiere of her new film Maskharehbaz, Tehran, October 10, 2019

Actress Matin Sotoudeh has been summoned to court in Iran for the possible “crime” of her attire at a red-carpet ceremony.

Sotoudeh had to appear in the Guidance Court in Tehran after “numerous requests” for a summons, following the premiere of jere film Maskharehbaz (A Hairy Affair) in the capital on October 10.

The actress was wearing the compulsory head covering of hijab, but her hair could be seen around her face. She was dressed in a buttoned-up, long-sleeved tunic tucked into belted trousers.

A day after the hearing, Sotoudeh removed Instagram photos of her red-carpet appearance and issued an apology:

Recently photos of me were published on social media, which were not intended to break any taboos whatsoever on my behalf. The photos have been exploited by spiteful media organizations and upset some of our dear compatriots. I therefore apologize to all of them, including the families of the martyrs.

The Culture and Islamic Guidance Ministry said it would draft guidelines on apparel for public appearances by those in the film industry. The statement was made after a meeting that also included the judiciary, the Islamic Republic of Iran Broadcasting, the Sports Ministry, and “other relevant bodies”.

The head of the Iranian Organization of Cinemas and Audiovisual Affairs, Masoud Najafi, issued an “emergency order” reminding celebrities that they must observe “principles and frameworks” or face consequences.

Sotoudeh has become one of Iran’s leading actresses with performances in the TV series Lisanseha 1 and the films Another One’s House and Yellow.

Two days before going to court, she expressed surprise over any controversy:

Honestly the reaction shocked me. Some people started to curse me on social media and I really don’t understand why. I was not wearing something contrary to society’s circumstances. My clothes covered me, and my hair was the same as always….In the past it did not become a big deal.

It was not my intention to cause a scene at all. I just wanted to wear something appropriate for the occasion. I picked some clothes from my closet and this was the result….

I wish we would respect each other.

(h/t to the Center for Human Rights in Iran)