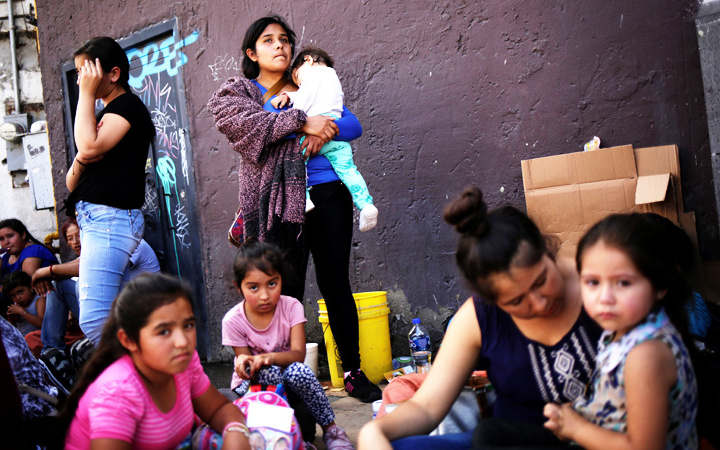 Migrant women and children queue to cross into the US to apply for asylum, Paso del Norte border, Mexico (Reuters)

The Supreme Court allows the Trump administration to bar most Central American migrants from seeking asylum in the US, while the case proceeds through the judicial system.

In a brief unsigned order, the Court said the Administration may enforce its “zero tolerance” policy which blocks asylum applications from migrants who have travelled through another country on their way to the US.

The new rules, published on July 15, only permit a migrant to proceed to the American border if he/she is denied asylum in another country. The guidance restricts the internationally-recognized legal right to apply for asylum.

Justice Sonia Sotomayor, joined by Justice Ruth Bader Ginsburg, dissented from the ruling: “[This will] upend longstanding practices regarding refugees who seek shelter from persecution.”

A Federal appeals court had blocked implementation of the policy.

The Administration is seeking to bar Hondurans, Salvadorans, Guatemalans, and others who travel through Mexico. Mexican migrants are not affected.

In July, the Court also allowed the Administration to begin using $2.5 billion of Pentagon money for the construction of Donald Trump’s Wall with Mexico. Last week, Defense Secretary Mark Esper authorized the diversion of $3.6 billion, including money for military construction projects which could include command and control, drone, cyber, and training facilities.

Last year, the Court upheld the Administration’s “Muslim Ban”, preventing entry into the US for citizens from six mainly-Muslim countries.

Lee Gelernt of the American Civil Liberties Union, which is representing the plaintiffs, said of Wednesday’s ruling: “This is just a temporary step, and we’re hopeful we’ll prevail at the end of the day. The lives of thousands of families are at stake.”

….The Southern Border is becoming very strong despite the obstruction by Democrats not agreeing to do anything on Loopholes or Asylum!

Kenneth Cuccinelli, the acting director of Citizenship and Immigration Services, said he will “commence implementing the asylum rule ASAP”.

The Administration’s Solicitor General, Noel Francisco, argued that the new policy was necessary for “an unprecedented surge in the number of aliens who enter the country unlawfully across the southern border and, if apprehended, claim asylum and remain in the country while their claims are adjudicated”.

The Justice Department brief did not note that migrant crossings into the US decreased year-on-year from early in the 21st century through 2018. They surged last year as migrants, mainly families, tried to reach the US before the “zero tolerance” policy came into effect.

Before its July 15 rules, the Administration had sought to restrict asylum by preventing migrants from reaching ports of entry and by deing the right of asylum to those suffering from domestic abuse or gang violence.

Migrants from Honduras, El Salvador, and Guatemala make up most of the asylum seekers this year. US Border Patrol has arrested 419,831 migrant family members from those countries at the southwestern border during this fiscal year. Only 4,312 Mexican family members have been detained.

In July, after Trump threatened tariffs on both Mexico and Guatemala unless they held migrants blocked from filing US asylum applications, the Guatemalan Government conceded to the arrangements. But the country’s Constitutional Court has ruled that the plan needs further approval, and talks over implementation continue.

The Mexican Government has refused to endorse the third-country agreement, and instead has deployed thousands of security personnel to its border on Guatemala, while conferring with the US on a program that returns migrants as they await asylum rulings.