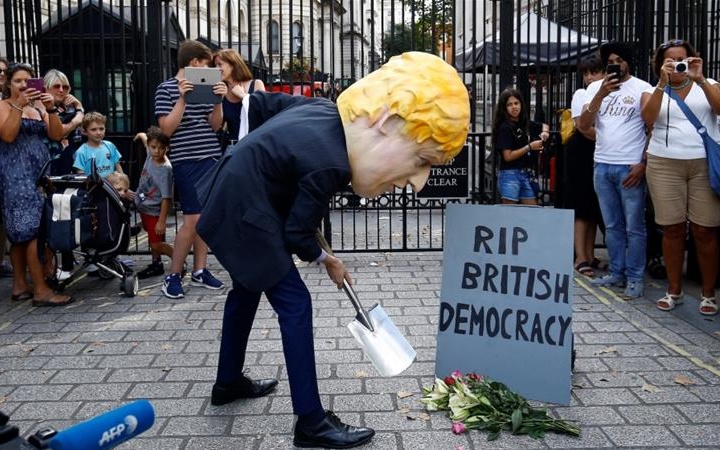 A man in a Boris Johnson buries UK democracy at a protest in front of 10 Downing Street, London, August 28, 2019 (Henry Nicholls/Reuters)

Wednesday’s order to shut down the UK Parliament for five weeks from September 11 was dramatic. But it’s far from surprising, if you have watched closely since Boris Johnson became Prime Minister on July 24.

From that day, Johnson has been devoted to one outcome, a No Deal Brexit from the European Union on October 31. On the steps of 10 Downing Street, he said the UK will “come out of the EU…no ifs or buts”. He waved away the consequences foreseen by experts and the Government’s civil servants — chaos, economic downturn and likely recession, political and social turmoil — by reducing it to “the doubters, the doomsters, the gloomsters”.

Ignoring the Parliamentary majority that prevented a No Deal in January and again in April, the new Prime Minister proclaimed, “We are going to fulfil the repeated promises of Parliament.” Dedicated to breaking with Europe, he announced “a new and exciting partnership with the rest of Europe”.

And, a month before he commanded the by-passing of democracy, he said, “We are going to restore trust in our democracy.”

Charging Off the Cliff

Johnson and his inner circle, notably senior advisor Dominic Cummings, hid their hand by maintaining the deception that they would reach “a new deal, a better deal” with the EU.

But from the start, the tell of their intention was in Johnson’s ultimatum of “No Irish Backstop” in any Withdrawal Agreement with the EU.

For more than two years, the EU 27 have been consistent and clear that they would not sacrifice the security and future of a remaining member — Ireland — for the demands of a country that was leaving. As the deputy head of the Irish Government, Simon Coveney, said on Wednesday, “[The UK] seems to be simply wiping the slate clean on the Irish issue in terms of the commitments that they’ve made.”

Meanwhile, Johnson and hard Brexiters were never going to countenance a backstop in which, in the absence of a political settlement, a hard Irish border is prevented by the UK remaining in a customs union with the EU. So the Prime Minister’s die has always been cast for a No Deal, with his magical mystical proclamation of “a new golden age” for Britain.

Wednesday’s proroguing of Parliament carried on that mix of deception and dedication. Johnson, with Ministers and loyalists reading from the script, said the suspension was the normal process of a new Government preparing its legislative agenda, on issues such as policing, the National Health Service, and schools. And anyway, MPs were going to be absent for much of September and October conferences at party conferences.

Pull the other one, as they say here. Johnson knows that the situation is not “normal”. He — and every decent political analyst — knows that the five-week shutdown is not to do with health and education, but with sharply limiting the Parliamentary time and opportunity to prevent No Deal. He knows that Parliament was preparing to sit in emergency session through the conference season, an option now blocked by prorogation.

What Can Be Done to Stop No Deal?

The Speaker of the Parliament, John Bercow, saw through Johnson’s deception, denouncing the “constitutional outrage”:

However it is dressed up, it is blindingly obvious that the purpose of prorogation now would be to stop parliament debating Brexit and performing its duty in shaping a course for the country.

Philip Hammond, Chancellor of the Exchequer until Johnson’s takeover in July, and other MPs also used the label “constitutional outrage” — and even “coup” — as they convened emergency meetings to discuss a response to the Prime Minister’s decree.

MPs had been working on a timetable of two months to prevent No Deal. Now they must now clear the tall hurdle of passing legislation through the House of Commons and House of Lords between September 3 and 11 — a maximum of six working days. Under the rules of prorogation, if they do not complete the task, they must start all over when Parliament is finally allowed to sit again on October 14.

The other option is to hold a no-confidence vote as soon as Parliament convenes next week. But it will not be enough to erase the Government’s majority of one. On Wednesday, Johnson’s inner circle put out the message: Come and Get Us. They said that if a no confidence vote passed, they will still remain in office until a General Election was held — which could be after October 31.

To forestall this, a new emergency, “national unity” government must go to the Queen for acceptance. So far, the effort to set up that government has been mired in disputes over whether it should be headed by Labour leader Jeremy Corbyn or — given widespread opposition to Corbyn among anti-No Deal Conservatives and MPs from other parties — political grandee such as Labour’s Harriet Harman or the Conservative Kenneth Clarke.

And even if the new government can push Johnson out the door of 10 Downing Street, it still has to get legislation passed by October 31 since the default position — whoever is in charge — is No Deal.

All the attention to political maneuvers has given another boost to Johnson: it has knocked the reality of chaos and an economic crash off the front pages.

Well before this summer, almost every economist, the Bank of England, and Government analysts were forecasting a relative loss of 10% in GDP under No Deal. As Johnson took over, the Office of Budget Responsibility set out a 3% loss in absolute GDP next year — a recession — with a $30 billion hole in Government finances and an addition of 12% of GDP onto national debt by 2023.

This, the OBR said, was the probable outcome in the “more benign” scenario of No Deal. The Bank of England agreed, saying the chance of recession was 1 in 3 but could soon increase.

Earlier this month the latest update of the Government’s No Deal preparations, Operation Yellowhammer, set out the immediate shock. With disrupted and broken supply chains, there will be shortages of food and medicine and accompanying price rises. Lorries will wait for days at ports. Social care and local services will be under threat. Two fuel refineries will shut. Police resources will be stretched to deal with disruptions and protests.

So why would Boris Johnson pursue this as the UK’s “Golden Age”? Part of the answer is the cold politics that the hard-Brexit faction in the Conservative Party are willing to sacrifice — or have others in the UK sacrifice — for the visceral pleasure of leaving Europe. Perhaps more importantly, if Johnson backtracks, he and the Conservatives are hostage to the No Dealers of Nigel Farage’s Brexit Party, which plans to put up candidates in each of the UK’s 650 constituencies in the next General Election.

But much of this is personal. On the day after the Leave’s surprise narrow victory in the June 2016 referendum, Johnson could have held the keys to 10 Downing Street. But, appearing stunned by the result, he froze in a press conference. He did not take on responsibility or seize Nigel Farage’s “This is our Independence Day” mantra. And so Boris was pushed aside as the Conservatives chose Theresa May as Prime Minister.

Three years later, Johnson — the boy who aspired to be “World King”, the man who fancies himself as a 21st-century Churchill — seized his last chance.

If he gives way to a Withdrawal Agreement with the EU, that chance ends in rebellion by the hard Brexiters and No Dealers among the Conservatives, the Northern Irish Democratic Unionist Party propping up the Government, and the Brexit Party. If he retreats before Parliament, his brief grasp on power ends in humiliation.

For Johnson, the consequences of chaos, recession, and social division pale before this. So damn the torpedoes of reality and full speed ahead.

It is not just throwing the gauntlet down to MPs. It is tilting the playing field, stacking the deck, rigging the game — all means necessary for the Halloween No Deal.