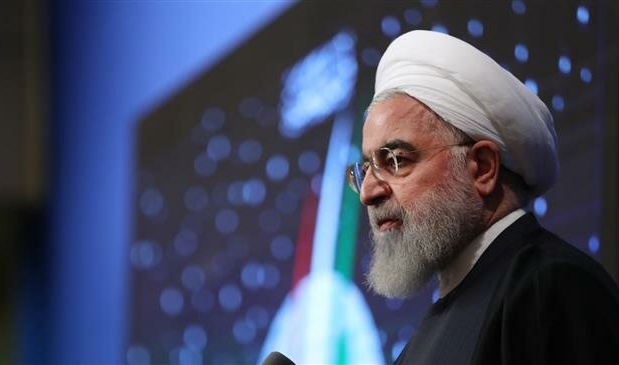 Publicly rebuked by the Supreme Leader, President Hassan Rouhani said on Thursday that Iran will not surrender to the US even if Iranians suffer mass casualties.

Rouhani told a group of war veterans in Tehran, “Iran won’t give up the goal of maintaining its independence and dignity even if it is bombarded and its men are martyred, wounded, and captured.”

He said that the confrontation with the Trump Administration is more complicated than the Iran-Iraq War of 1980-1988, in which hundreds of thousands of Iranians were killed. Whereas the Islamic Republic faced military attack and occupation in the 1980s, today it is “faced with an economic war and an attack on people’s welfare”.

The enemies are pressuring Iran to make it regret its independence and dignity, but the people will once again show the enemies’ plots will not bear fruit….I explicitly declare that the Iranian nation will defeat the US, the Israeli regime, and the regional reactionaries through resistance and unity.

On Wednesday, the Supreme Leader turned against Rouhani and Foreign Minister Mohammad Javad Zarif, blaming them for the 2015 nuclear deal with the 5+1 Powers (US, UK, France, Germany, China, and Russia).

Retroactively withdrawing his support for the negotiations leading up to the Joint Comprehensive Plan of Action, Ayatollah Khamenei asserted, “I did not believe in the way the JCPOA was done, and I have made this clear to the President and the Foreign Minister on many occasions.”

A divided Trump Administration has stepped back from military challenge this week, after a rebellion against the hawkish views of National Security Advisor John Bolton. Both Acting Defense Secretary Patrick Shanahan and Secretary of State Mike Pompeo told a Congressional committee that they did not foresee war, although both continued to back the US economic pressure on Iran.

But Khamenei’s statement pointed to the ascendancy of hardliners over Rouhani. On Thursday, the head of Iran’s military Maj. Gen. Mohammad Baqeri spoke of a “clash of wills” with the US.

Speaking on the anniversary of the recapture of the southwest Iranian port city of Khorramshahr in the war with Iraq, Baqeri said:

Under conditions that, as put by the sage Leader of the [Islamic] Revolution…, the confrontation and faceoff between the Islamic Republic of Iran and the wicked government of America is an arena for “clash of wills”. This reminds us the epic victory in Khorramshahr to friends and foes of the Revolution can convey a powerful message….

The God-based determination of Iran, in the face of any possible conflict and warmongering, will result in a hard, crushing and destructive response to any bullheaded and adventurist enemy.

On Wednesday, the deputy commander of the Revolutionary Guards, Rear Adm. Ali Fadavi, declared that the US — which is moving a carrier strike group to the Persian Gulf — is subject to the strength of Iran’s forces: “Over the past many years, our forces have acquired full control of the Persian Gulf in a way that they [US warships] should get permission from us for their movements in this area.”