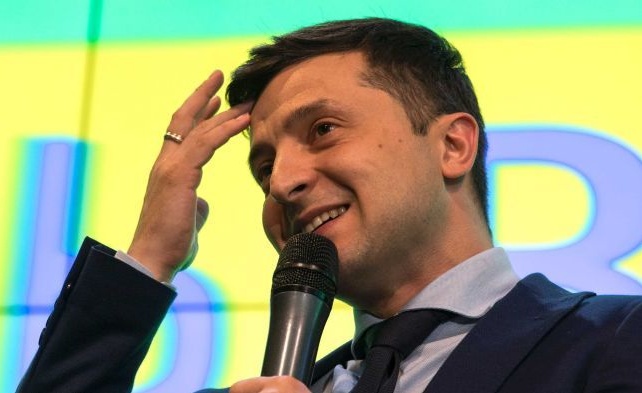 Volodymyr Zelenskiy, the front-runner in first round of Ukraine’s Presidential election (ABC News)

Stefan Wolff of the University of Birmingham and Tatyana Malyarenko of National University Odesa Law Academy write for The Conversation:

With early results indicating that comedian Volodymyr Zelenskiy has decisively won the first round of Ukraine’s Presidential election, it now seems certain he will face incumbent Petro Poroshenko in the second round. This run-off between Zelenskiy and Poroshenko, both of whom expressed pro-European sentiments, also means that it will be the first Ukrainian presidential election in which Moscow has no candidate left to support. Or so it may seem.

Russia’s ability to influence elections may have decreased significantly, but its geopolitical interest in Ukraine has not diminished. In the absence of any realistic prospect of a more pro-Russian government in Kiev, Russia continues to play a longer game. As we have previously argued, Russia’s strategy is to prevent Ukraine from slipping out of its control completely and to limit the influence of a pro-European vision.

Given the cumulative effect of the myriad challenges that Ukraine is confronted with, this is, from the Kremlin’s perspective, a promising approach. The toll that the ongoing war in Donbas continues to exert on Ukraine, the damage inflicted by the trade war with Russia, and the worsening domestic problems, including corruption, poverty, unemployment, and decreasing living standards, together create a favourable environment for a positive (for Russia) reset of Ukraine-Russia relations in the future.

Despite the apparent lack of any direct Russian involvement in the Presidential elections, the electoral campaign has been dominated by a focus on Russia. Indeed, Poroshenko has concentrated on Moscow ever since he began his electoral campaign with the introduction of 30 days of martial law following the clash between the Russian and Ukrainian navies in the Azov Sea in 2018.

Focusing on Russia serves a dual purpose for Poroshenko. It allows him to gloss over areas in which he has been less than successful, such as his inability to deal with corruption, reform the justice system, bolster the economy, or improve human rights.

At the same time, it gives him the space to emphasise issues where he has done better. His policies — aimed at the establishment of a linguistically, religiously, and ideologically unified Ukrainian state — have sought to make Ukraine more resilient in the face of Russian influence. Thus, public expenditure on the Ukrainian armed forces has increased during Poroshenko’s Presidency, although it is no longer at the 2015 level of almost 4% of GDP. A foreign policy aimed at further European integration is also firmly embedded in recent changes to the Ukrainian constitution.

The recent move of the Orthodox Church of Ukraine to fall under the authority of the Patriarchate of Constantinople rather than the Patriarchate of Moscow has also also weakened another tool of Russian soft power. As has a law cementing the status of the Ukrainian language in all spheres of public life.

The Poroshenko camp’s main electoral slogans of “Language, army, religion” and “Far away from Moscow” reflect this past record of relative success and also continuity were he re-elected. This was enough to beat former prime minister Yulia Tymoshenko into third place in the first round of the elections and to secure Poroshenko a place in the run-off against Zelenskiy. Even so, it is doubtful that this strategy will work to secure Poroshenko a victory in the second round.

A recent opinion poll indicates a significant growth of public sympathy towards Russia and the Russian people. Now, 57% of respondents have a positive attitude towards Russia and 77% to the Russian people. Although only 13% hold similar views about the Russian government (and most of these respondents live in Ukraine’s south-eastern regions), more than half of all Ukrainians (53.5%) do not approve of their own government’s decision to ban Russian media in Ukraine.

The divergence between public opinion and government policy is even more stark when it comes to the Russian language. Only 7.8% of those surveyed think that the Russian language should be excluded from the education system, while 30% believe that it should have the same status as Ukrainian. Half believe that it has to be studied more or equally as much as other foreign languages.

The growth of public sympathy towards Russia and Russians in 2018-2019, despite the ongoing war in Donbass and the government’s “Ukrainization” policy, can be explained in the same way as the meteoric rise of Zelenskiy, a young comedian without any experience in politics or any meaningful political platform.

Both of these phenomena – the resurgence of positive attitudes towards Russia and Russians and the popularity of a political outsider – are one of the consequences of an exceptionally low level of public trust in government.

According to a recent Gallup poll, only 9% of Ukrainians have confidence in their national government, while 91% see corruption as widespread throughout government. Only 12% have confidence in elections being free and fair. In addition, increasingly autocratic tendencies are evident in the curtailing of human rights and the imposition of limitations on media freedom.

Changing attitudes towards Russia and the support for Zelenskiy indicate that significant parts of Ukrainian society are no longer willing to follow a largely discredited political class. While it may be naive to expect that a political outsider like Zelenskiy can eventually deliver a new vision of Ukrainian statehood, a growing number of Ukrainians appear prepared to give him a chance.

Paradoxically, Russia may therefore benefit more from a continuation of Ukraine’s current course under Poroshenko that furthers the country’s divisions. Business as usual after the elections will simply mean weak and dependent state institutions, easily susceptible to external leverage from both Russia and the West.

The simplistic belief among some, both inside and outside Ukraine, that this would present a sustainable status quo as the geopolitical rivalry in the contested post-Soviet neighbourhood continues to play out is misguided. It is also likely to backfire as seriously – but likely with even worse consequences – as it did after the Orange Revolution and the Euromaidan.