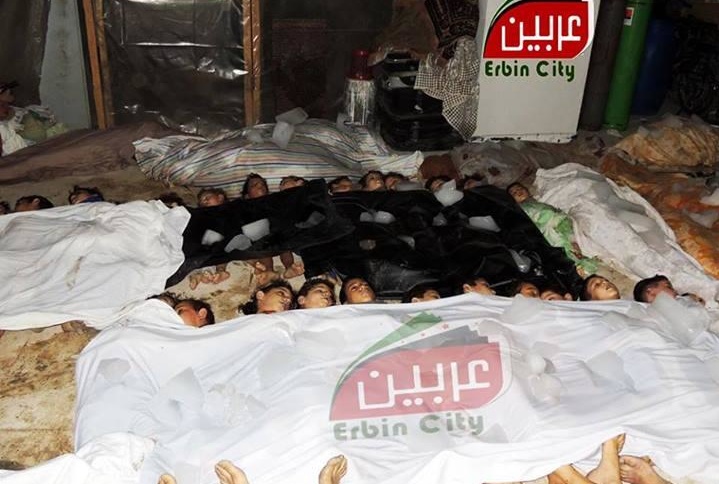 Tobias Schneider and Theresa Lütkefend, writing for the Global Public Policy Institute, have examined every report of a chemical weapon attack in Syria since the conflict began in March 2011.

Of the 336 attacks supported by evidence, 328 were by the Assad regime and the other eight by the Islamic State.

Our research found that there have been at least 336 chemical weapons attacks over the course of the Syrian civil war – significantly more than has commonly been known. Around 98 percent of these attacks can be attributed to the Assad regime, with the Islamic State group responsible for the rest. Approximately 90 percent of all confirmed attacks occurred after the infamous “red line” incident of August 2013.

The Syrian military’s chemical warfare campaign is closely intertwined – logistically, operationally and strategically – with its campaign of conventional warfare. The designs of the Assad regime’s improvised chlorine munitions, which have accounted for at least 89 percent of all chemical attacks throughout the war, are clearly derived from conventional “barrel” or “lob” bombs. Both are employed by the same Syrian military formations via the same delivery systems.

It is clear that the Syrian military has consistently prioritized striking population centers over rebel positions on the frontlines, even in the face of defeat on the ground. Indeed, the Syrian regime’s persistent and widespread use of chemical weapons is best understood as part of its overall war strategy of collective punishment of populations in opposition-held areas. Chemical weapons are an integral component of its arsenal of indiscriminate violence, alongside sieges and high-explosive weapons such as “barrel bombs.”

We show that the Assad regime did not merely “get away” with its use of these banned weapons, but succeeded in using them for strategic ends. More than two-thirds of Syria’s population are internally or externally displaced, and opposition-held communities have been buckling and surrendering under the cumulative weight – and eventually the mere threat – of violence, including the use of chemical weapons.

Putting a stop to the Syrian regime’s strategy of chemical weapons use will require halting its overall machinery of indiscriminate violence. In order to effectively disrupt the Syrian chemical weapons complex and deter their future use in Syria and other conflicts, the United States and the wider international community should directly target the military formations that would be responsible for any future attacks. The Syrian helicopter fleet, which has played a critical role in the delivery of conventional and chemical barrel bombs, should be a primary target.

In April 2014, rebel forces in northern Hama, an early hotspot of armed anti-regime mobilization, launched an offensive attempting to cut and capture positions along the strategic M5 highway, a key transportation artery connecting Damascus and Aleppo, threatening to all but cut the country in half. In its response to the rebel offensive a mere eight months after the fateful “red line” incident of August 2013, the Assad regime established a model that would define the regime approach to chemical weapons for the next four years: the systematic, widespread, indiscriminate use of chlorine against opposition-held towns.

Over the course of three months, Syrian government helicopters launched at least 43 chlorine attacks against a string of villages along the highway. As previously, they targeted opposition strongholds such as the small town Kafr Zita in northern Hama instead of military positions. Despite not having encountered chemical weapons in the past, civilians quickly grasped the punitive nature of the attacks: “Every time the FSA [Free Syrian Army] progresses on the outskirts of Hama city, the regime retaliates by bombing our city with poison gases,” reported one local resident.

The Joint Investigative Mechanism’s final report paints a devastating picture of what unfolded in the following months: locals told investigators that, “because of the frequency of attacks,” they “had lost their sense of the dates and times of the various incidents.” With the help of medical records, the mission concluded that this small rural town and its immediate environs had been struck at least 17 times, usually at night.

Meanwhile, the international community avoided action. Local and foreign reporters had filed unequivocal dispatches, including dozens of photos that showed the remnants of improvised chlorine munitions. Within three weeks of the first attack, The Telegraph had gone so far as to take soil samples from the area, submit them for professional testing, and publish its findings about the presence of chlorine as well as ammonia.

The lackluster response from the international community, which referred the attacks to international investigative bodies rather than taking decisive action51, not only further undermined the supposed prohibition against the use of chemical weapons, but confirmed to the Assad regime that the “red line” articulated by US President Obama had been an exit rather than an entry ramp for the United States in the Syrian conflict. In singling out “chemical weapons,” the American President had tried to limit US exposure to another Middle Eastern war, but had failed to appreciate that for the regime in Damascus, this was a distinction without a difference. Chemical weapons represented just another addition to its arsenal of indiscriminate violence, like shelling or sieges, which would eventually assure the regime’s survival in power in an existential war. A red line it was thus bound to challenge.

Indeed, as our analysis shows, the Assad regime’s use of chemical weapons and its wider war effort are inextricably – tactically, operationally and strategically – linked. To effectively deter and prevent future use of unconventional weapons, the international community would have to pursue policies that disrupt the regime’s conventional machinery of population warfare as well.

In the Hama offensive of 2014, the international community had the opportunity to do just that and shape the war at its most decisive stage. A single salvo against the regime’s helicopter fleet or improvised munitions factories would have delivered a meaningful blow against the Assad regime’s chemical weapons complex as well as its entire machinery of indiscriminate violence. This point should be taken especially seriously by European governments concerned about refugee flows and ungoverned spaces. Early disruption of the regime’s war effort could have limited one of the principal drivers of civilian flight and governance failure.

Chemical weapons were not the only, nor even the principal, vector of mass violence in this campaign; however, it represented a legitimate lynchpin around which it would have been possible to build international consensus for serious action short of regime-change. The subsequent experience of retributive strikes following the chemical attacks of Khan Shaykhoun in 2017 and Douma in 2018, in a much more contentious regional environment, showed that the threat of escalation could have easily been contained.

In each case, the United States and its allies succeeded at reestablishing deterrence (there have been no new Sarin attacks since 2017 and no new chlorine attacks since 2018) without getting drawn into a wider confrontation with Damascus. At the same time, our analysis shows that the regime’s strategy of indiscriminate violence had little direct effect on the movements of frontlines. Its disruption could have prevented – or slowed – regime victory without leading to the regime’s immediate collapse.