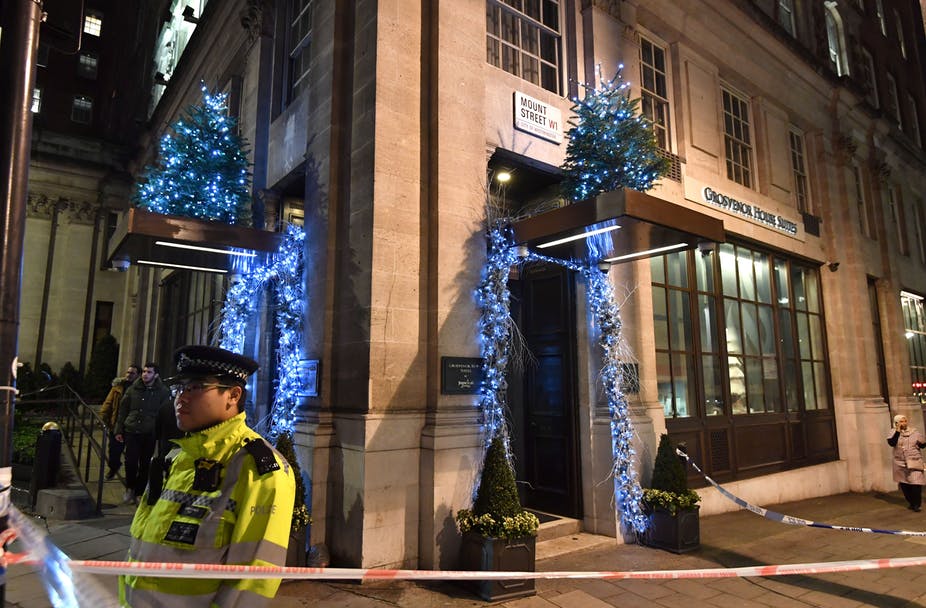 The London club where a stabbing killed one person and injured another, December 31, 2018 (John Stillwell/PA)

Dr Steve Hewitt of the University of Birmingham writes for The Conversation:

Several people were stabbed in two separate incidents in the UK on New Year’s Eve. In Manchester, three people were hurt while in London, one person was killed and one injured. hurt and one killed.

News alerts went out about the Manchester stabbings where the victims included a policeman. The Washington Post posted a headline in red on its homepage and the incident was a lead item on the BBC. People, including me, rushed to tweet. There were public statements from the Prime Minister, the Leader of the Opposition, and the Home Secretary.

What drove the reaction? The alleged perpetrator in Manchester shouted “Allahu Akbar” (God is Great), which led the police to treat the attack as a potential terrorist incident.

Meanwhile in London, doorman Tudor Simionov was killed outside a club, apparently after trying to stop a group of people entering the private party. A second person was stabbed. There was some limited news coverage, but nothing on the scale of the Manchester incident and certainly no international interest.

The differing response to violent assaults on the same evening is worrying because of the message it sends to potential future attackers. Terrorists crave publicity or, in the words of terrorism expert Brian M. Jenkins, “a lot of people watching”. Now it seems that this can be achieved simply by brandishing a kitchen knife and shouting out a slogan.

This reality becomes particularly problematic when it is coupled with an increase in lone-actor terrorism. Rather than bombings, we are seeing more attacks in which an individual, often deploying everyday items such as a vehicle or a kitchen knife, inflicts injuries, deaths, and terror. Such attacks are difficult – if not impossible – to prevent but, thankfully, frequently involve few casualties.

If this trend continues, there needs to be a wider reflection on the response in the aftermath of an attack.

There is a crucial need to avoid an overreaction. After the murder of Lee Rigby in 2013, the then prime minister David Cameron told the public that “one of the best ways of defeating terrorism is to go about our normal lives. And that is what we shall all do”. But he interrupted a public trip to France in order to return to London and deliver this message, which somewhat undermined his own sentiment.

The issue, of course, is not new. Margaret Thatcher famously observed in 1985 that “we must try to find ways to starve the terrorist and the hijacker of the oxygen of publicity on which they depend”. Her government subsequently attempted to restrict British media coverage of Sinn Fein, the political wing of the Provisional Irish Republican Army. Those efforts in the 1980s failed and – in the 21st century and an era of social media – government censorship and even media self-censorship is impractical.

Since a lack of media coverage or political reaction to any level of terrorism is not an option, then what? We need a more considered response to terrorism. We need to make an effort not to overreact through speed, sensationalism, and blanket coverage of every attack perceived as terrorism. That is exactly what perpetrators seek. A smarter response by both the media and politicians would instead emphasise resiliency and context.

Context might include recognition that it is ordinary crime, including non-terrorism-related murder, that affects the lives of Britons more than terrorism. Thus, the irony of the different responses on New Year’s Eve is that the London attack reflected an ongoing problem across 2018 during which at least 70 people were stabbed to death in the capital. Not one of those deaths involved terrorism but those affected deserve no less attention.