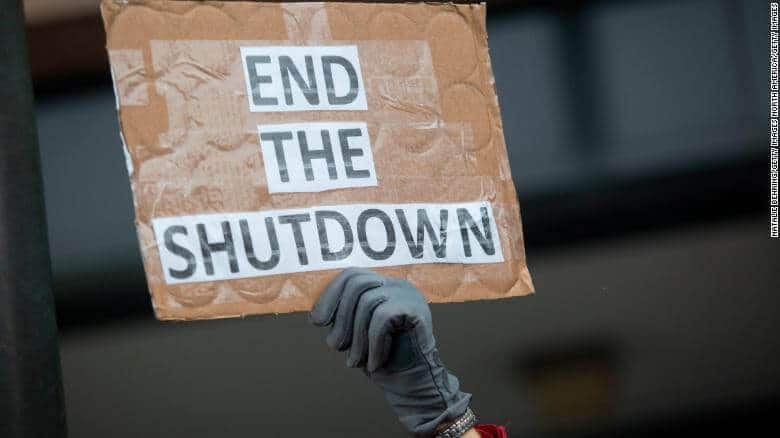 Republican leaders rally around Donald Trump’s demand for $5.7 billion for his Wall with Mexico, in return for a limited return of immigrant protections taken away by the Trump Administration, on the 30th day of the record-setting Trump shutdown of the Federal Government.

On Saturday, Trump repeated his insistence on funding for the $25 billion “see-through steel barrier”. He offered a three-year extension of status for about 800,000 young “Dreamer” immigrants — a protected status which he tried to remove last March in an order which is being legally contested. He also said he would restore Temporary Protected Status, which he attempted to strip away last year, from about 300,000 immigrants from Latin American and African countries.

Democrats immediately rejected Trump’s announcement as “hostage-taking”. GOP legislators followed Trump’s line yesterday, trying to shift blame for the shutdown — which Trump said he would be “proud” to pursue on December 11 — onto the other party.

This is the latest and most significant step yet of POTUS showing his willingness to negotiate and compromise with Democrats on the issue of wall funding. At this point, if Democrats refuse to come to the table, it will show they are not at all serious about solving this impasse.

Trump also retweeted praise for his leadership and falsely asserted that 50% of Hispanic voters support him.

In fact, the poll by NPR/PBS/Marist showed Hispanic support at 45%. And Trump failed to mention that it recorded a drop in his overall approval rating from 42% to 39%.

Just before the Government shut at midnight on December 21, Trump rejected a unanimously-passed Senate bill to provide funding including $1.3 billion for border security. The House of Representatives, now controlled by Democrats, adopted a similar measure on January 3.

But Senate Majority Leader Mitch McConnell has refused consideration of the House continuing resolution. The White House and McConnell now want to push through a measure with Trump’s proposals, which also adopt the border security money allocated in the Senate and House bills that he rejected.

When asked on @FoxNewsSunday why Trump and McConnell refuse to reopen the government, Pence stammers. pic.twitter.com/Ismt7ueuRi

Democrats signalled on Saturday that the limited return of protection for immigrants was not sufficient.

Last March, Trump agreed to Wall funding in return to a path to citizenship for the Dreamers, who came to the US as children with undocumented parents. But he withdrew the acceptance under pressure from hardline White House advisors and conservative commentators.

“If he opens up the government, we’ll discuss whatever he offers, but hostage taking should not work,” Senate Minority leader Chuck Schumer told reporters on Sunday. “It’s very hard to negotiate when a gun is held to your head.”

On Wednesday, House Speaker Nancy Pelosi intends to table a package of six bills to fund nine government agencies which been all or partially closed. The measures were approved last year by Republicans on the House and Senate Appropriations Committees.

About 800,000 federal employees are on furlough or working without pay. On Friday, they will miss their second paycheck.