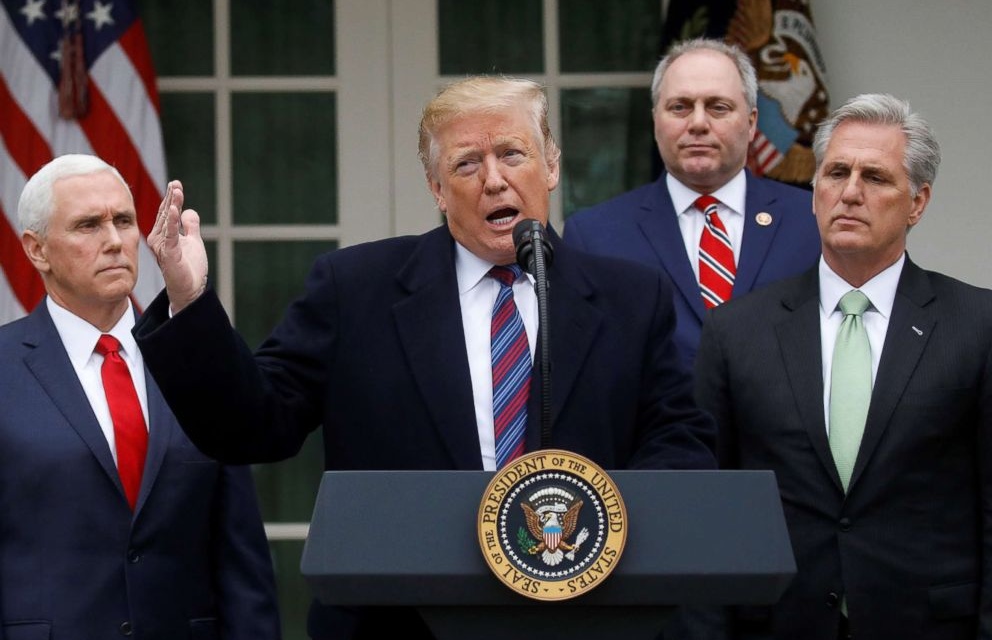 Donald Trump threatens a Trump shutdown of the Federal Governent of “months or even years” if he does not get $5.7 billion for his Wall with Mexico.

In an appearance in the White House Rose Garden on Friday, he threatened to declare a national emergency to build the barrier without Congressional approval.

And he said that he could invoke a military version of “eminent domain” to seize private land for the Wall.

We can call a national emergency and build it very quickly. And it’s another way of doing it. But if we can do it through a negotiated process, we’re giving that a shot.

Trump’s appearance yesterday was the latest impromptu, rambling declaration over the shutdown, which began at midnight on December 21 after he rejected a Senate proposal for funding to keep the Government open. That measure included $1.3 billion for border security measures, but no dedicated money for Trump’s 30-foot-high concrete barrier or his vague alternative of “steel slats”.

Parts of nine Government departments are closed, and almost 800,000 employees are on furlough or working without pay.

Trump expressed little concern for the staff, who have been told by the Government to ask landlords and creditors for relief from their bills. Instead, he insisted yesterday that many workers eagerly backed the shutdown and that Border Patrol members told him that he was doing “a great thing for our country”.

NBC’s Jacob Soboroff, a leading journalist on immigration and the Administration’s “zero tolerance” approach, points out the falsehoods spread through Trump’s presentation:

So yeah, Trump was just completely making stuff up in the Rose Garden today when he was making the case for his border wall.

Here are some examples. pic.twitter.com/LCQph7oGRp

The distortions and errors extended to mis-naming Trump’s closest allies. He initially referred to House Minority Leader Kevin McCarthy as “Peter” and later as “Steve”.

On Thursday, hours after Democrats took control, the House of Representatives adopted the continuing resolution with the $1.3 billion for border security. However, Senate Majority Leader Mitch McConnell said he will not permit Senate consideration of the bill if Trump will not sign it.

The day before, Trump had used a meeting with Republicans and Democrats to repeat his insistence on a Wall, without a specific reference to the amount of the down payment for it. And on Thursday, he tried to take attention from new House Speaker Nancy Pelosi with a sudden, unprecedented appearance in the White House Briefing Room.

We told the President we needed the government open. He resisted. In fact, he said he’d keep the government closed for a very long period of time, months or even years.

In the Rose Garden, surrounded by Vice President Mike Pence, Homeland Security Director Kirstjen Nielsen and senior Republican legislators, Trump confirmed, “I did say that. Absolutely I said that. I don’t think it will, but I am prepared.”

Observers noted that Trump has already rejected a compromise tabled last week by Pence, in meetings with Democrats, for a $2.5 billion increase in border security with no specific provision for The Wall.

Nancy Pelosi: "We recognize on the Democratic side that we really cannot resolve this until we open up government. And we made that clear to the president. Services are being withheld from the American people. Paychecks are being withheld." Via CBS pic.twitter.com/B5rERSxo9s

Asked if he was “proud” of his shutdown, a reference to his December 11 statement to Schumer and Pelosi, he replied:

I’m very proud of doing what I’m doing. I don’t call it a shutdown. I call it “doing what you have to do for the benefit and for the safety of our country”.

The Administration is also seeking indefinite detention of families, overriding a 1997 court decision that bars holding children for more than 20 days.

Working without pay, Transportation Security Administration employees at major airports are calling in sick, according to union and airport management officials.

About 170 TSA employees, many of them responsible for screening passengers, did not work on Friday morning at Kennedy International Airport in New York. The gap was covered by other officers working without pay.

The absences are three times their normal level of 25-30 per shift at Dallas-Fort Worth International Airport.

A federal official said the call-outs appeared to be a coordinated protest, while a TSA spokesman claimed typical patterns around the holidays and flu season.

But union officials said many workers are likely to be seeking alternative temporary employment to make up for lost wages, ensuring they can pay for rent and child care.

Statement on nationwide “sick out” as reported by CNN’s Rene Marsh and Gregory Wallace. #News pic.twitter.com/RK0wiFLRJt

Administration Did Not Recognize Shutdown Impact

The Trump Administration did not comprehend the possible impact of the shutdown, “several senior administration officials” said.

The officials said the administration is now recognizing this and is focused on understanding the scope of the consequences and what action can be taken.

Food stamps for 38 million low-income Americans and more than $140 billion in tax refunds could be affected if the shutdown continues into February.

The shutdown has also cut off new funding to the Treasury Department and the US Department of Agriculture, leaving them largely unstaffed.

Congress has not allocated funding for food stamps — the Supplemental Nutritional Assistance Program beyond January. The program’s emergency reserves cannot cover even 2/3 of February’s monthly payments of about $4.7 billion.

The USDA office that administers SNAP has sent home 95% of its employees without pay, and the Internal Revenue Service has put 90% of staff on furlough.